Here’s the Only English-Yiddish Dictionary You Need 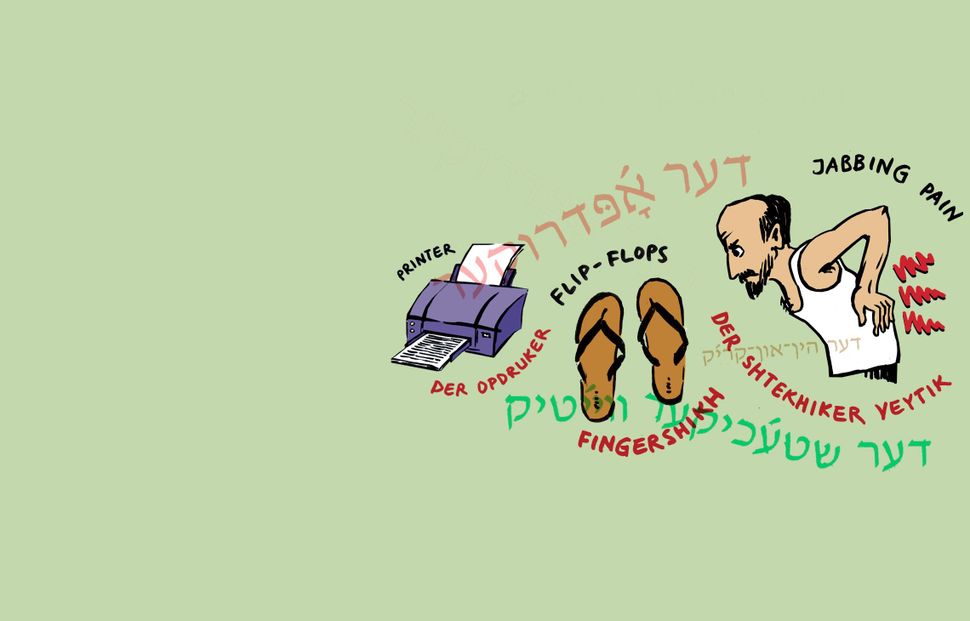 It isn’t easy being a language without a country.

Unlike English, Hebrew and hundreds of other languages that have governments to protect them and nurture their growth, Yiddish has, for the most part, always been a language of the “goles” (rhymes with Dulles) — or the Diaspora.

There have been some rare exceptions. In the Belarusian SSR, Yiddish was designated an official language in 1921 together with Belarusian, Polish and Russian. More recently, in 1999, Yiddish attained the status of an official language of Sweden as part of the government’s campaign to legally protect the cultural and historical heritage of minority languages at risk.

For the most part, though, Yiddish has always been stateless — rather remarkable, considering the sheer number of speakers at its peak: Over 10 million Jews spoke Yiddish prior to the Holocaust. In fact, 85% of the Jews who died in the Holocaust were Yiddish speakers.

Today, after decades of linguistic assimilation, a growing number of Ashkenazi Jews are reclaiming Yiddish as a heritage language. They are taking Yiddish classes; singing and performing Yiddish songs ,and attending cultural events like Yiddish concerts, films and theater. Some are even raising their children in the mameloshn, the mother tongue

Among tightly knit Hasidic communities in New York, London and Jerusalem, Yiddish continues to be the dominant tongue in the home, the school and the press.

A number of people also use Yiddish in their professions. Physicians and social workers, for example, often use it to communicate with non-English-speaking elderly Jews from the former Soviet Union.

One problem for many people speaking Yiddish in the new millennium, though, is the lack of a reliable dictionary providing the Yiddish translation for words and phrases commonly used today. How do we say speakerphone in Yiddish? Panic attack? In the buff?

Thankfully, the Comprehensive English-Yiddish Dictionary, recently published by Indiana University Press, is now helping to fill the gaps. Based on the lexical research of Dr. Mordkhe Schaechter (quick disclaimer: I’m his daughter and one of this dictionary’s co-editors, Gitl Schaechter-Viswanath, is my sister), the 800-page dictionary is becoming the go-to book for anyone looking for a response to this question: How do you say it in Yiddish?

(For inquiring minds who want to know, speakerphone is hilkh-telefon; panic attack is panik-onfal and in the buff —odem-naket.)

Oddly, one of the main obstacles to modernizing the Yiddish language has been resistance from certain Yiddish speakers themselves. I’m always puzzled when people ask me for the Yiddish translation of an English word but, after hearing my response, insist that the word isn’t really Yiddish because “my grandmother never used it.”

Part of their discomfort is that a number of words are indeed neologisms, or newly coined words. Their grandmothers didn’t use these words because years ago, many of these expressions or technological advances didn’t exist. One hundred years ago, when Jews lived in the shtetl, for example, they were awakened each morning by the “shul-klapper,” the synagogue official who went from house to house, rapping on the window shutters to call the men to prayer. Today, they are awakened by the alarm on their smartphones. Like any other contemporary language, Yiddish needs to reflect this new reality.

Despite the hesitation of some Yiddish speakers, some Yiddish neologisms do catch on. In the early 1990s, for example, when people first started using the term “electronic mail,” later shortened to simply “email,” a clever translation was coined: blitspost. Initially, people laughed when they heard it, but eventually, many began using the term — partly because the word blitspost had a nice ring to it, but even more importantly, by giving this revolutionary new messaging system a Yiddish equivalent, we succeeded in making it ours.

Rukhl Schaechter is the editor of the Forverts.

Here’s the Only English-Yiddish Dictionary You Need