How Poet Marianne Moore Was Inspired By the Jews 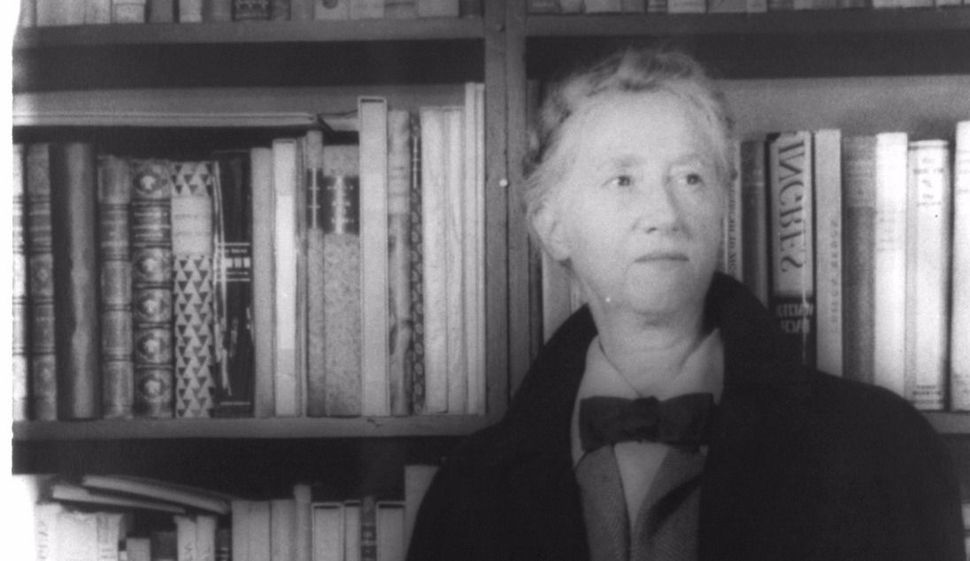 American modernist poets, including T.S. Eliot, Ezra Pound, Wallace Stevens, and William Carlos Williams, were notorious for differing degrees of anti-Semitism, but their colleague Marianne Moore (1887–1972) was uniquely inspired by Jewish tradition and lore. Linda Leavell edited a recently published edition of Marianne Moore’s landmark first poetry collection, “Observations” (1924). She has also published on Moore and the visual arts, and a biography of the poet from Farrar, Straus & Giroux. A professor emerita of English at Oklahoma State University, Leavell spoke with “The Forward’s” Benjamin Ivry from her home in Fayetteville, Arkansas about what drew Marianne Moore to Yiddishkeit.

Benjamin Ivry: Why was it that unlike other American modernist poets, Marianne Moore was inspired by Jews instead of despising them?

Linda Leavell: I think it has a lot to do with her Presbyterian upbringing. She and her mother moved to Carlisle, Pennsylvania, where there was a rather liberal church or what we call liberal today. The pastor of the church was fiercely appreciative of the Indian students who would come to school at Carlisle. So she grew up in an atmosphere of tolerance. Her experience in her family made her value freedom and individuality.

Could one reason be that Moore did not adopt a European identity or persona unlike Pound or Eliot, and so did not assume European traditions of anti-Semitism?

I think definitely. She very firmly identified as American. She did identify with Ireland to some degree, and was interested in Irish independence. As a Scots-Irish American, she identified with being oppressed by Europe, with people who were in the margins rather than with the mainline culture.

In an essay from the 1940s translated by Doris Vidaver, the Yiddish poet Jacob Glatstein (1896–1971) describes a 1944 visit to Moore sparked by her review of Ada Jackson’s poem “Behold the Jew.” (1944) Moore’s mother told Glatstein of “her Jewishness… if she were not in some way Jewish, she would not be truly Christian.” Could Moore’s mother have inspired her sympathy for Jews?

I think so, but I think that identification came as much from her daughter as it did on her own. Marianne Moore took a course on Hebrew poetry at her church before she had published as a poet. A young intellectual instructor taught her Hebrew poetry and the minor Prophets, whom she always named as an influence.

Moore told Glatstein how in their Brooklyn neighborhood, she instructed Irish parents to teach their children not to beat up Jewish classmates, telling them “But it is your business. It is truly your business.” Where did this mission to educate come from?

It is hard to say how much [Moore] was opposed to any form of stereotype or tyranny or oppression. She was very upset about Ireland’s neutrality during World War II. She believed that was an affront to the Jews. Her view was that World War II was all about the destruction of the Jews.

“The Labors of Hercules” in “Observations” speaks of teaching the world that “the Negro is not brutal and the Jew is not greedy,” according to the Rev. J.W. Darr. Who was he?

He was their pastor in Greenwich Village at Spring Street Presbyterian Church. Lots of the poems of that time are about overcoming stereotypes and first impressions, about how it’s so hard to overcome preconceptions of the mind.

“Novices,” in “Observations,” notes the “willowy wit, the transparent equation of Isaiah, Jeremiah, Ezekiel, Daniel.” Were the Prophets witty in Moore’s view?

In her study of the minor Prophets, Moore loved the ideology of the Hebrews. She felt the Greeks were overly rational and the Hebrews lived by their emotions instead, which she felt was very positive. In “Novices,” she says some reader might overlook the passion in the Hebrew language.

“A Carriage from Sweden,” (1943) interjects the subject of “Denmark’s sanctuaried Jews!,” about the rescue of Danish Jews in 1943 who fled to Sweden.

While she was in the process of writing that poem, she learned that Sweden had provided sanctuary to Denmark’s Jews. Unlike Ireland’s neutrality, which she wrote about in the poem “Spenser’s Ireland,” (1941) Sweden used its neutrality to save the Jews.

I have never come across any evidence to that effect. It was through Bryher that Moore became aware of the treatment of European Jews and strongly sympathized with them.

In a 1939 letter to Pound,, who had called Bryher a “semite-sadist,” Moore replied that she was “one of the least ungenerous or intolerant persons I have ever known,” reproving him for his “destructive attitude.” Why did she wait until 1939 to try to educate Pound on anti-Semitism?

She regularly scolded people like Pound and Williams and Robert McAlmon about their prejudiced views on people. She criticized Williams about his views on women, and would have surely spoken out against Pound’s views when she became aware of them.

That same year, Moore wrote about how the American theologian Reinhold Niebuhr, showed that “intolerance is at work in us all in all countries, – that we ourselves ‘persecute’ Jews and Negroes & submit to wrongful tyranny. Or at least feel ‘superior’ in sundry ways.” A year before, in a notebook she wrote about victims of persecution: “One does not feel detached by one’s horror-even if they are not of our country. They are we. They are of our kind.” This would seem a profoundly Christian reason for sympathizing with Jews.

“Novices” (1923) praises the “spontaneous unforced passion of the Hebrew language” and “The Past is the Present” (1915) quotes Kellogg: “Hebrew poetry is prose with a sort of heightened consciousness.” It cites A. R. Gordon’s “Poets of the Old Testament.” (1912) about the “precipitate of dazzling impressions, the spontaneous unforced passion of the Hebrew language – an abyss of verbs full of reverberations and tempestuous energy,” in an inexact paraphrase of the original. Are these quotes so imprecise to rate as original writings by Moore, advancing her own views?

Very often. Often she takes quotations completely out of context and uses them to mean almost the exact opposite of what the original meant. She wasn’t thinking about documenting her quotations and notes when she was writing the poems. When she was asked about the sources, she decided to go back and look them up.

Moore identified with the prophet Jonah in “Sojourn in the Whale” and “Is Your Town Nineveh?,” (both 1916). Cristanne Miller suggests that this was because for her, Jonah represented the belief “that institutions and people may change.”

The part of Jonah I think [Moore] identified with was that he was forced to do something he didn’t want to do, but he did it anyway. He did it out of faith. She wasn’t an evangelist spouting wisdom, and Jonah was a reluctant prophet who had to be forced to deliver it.

Not every Jew won her uncritical approval. In 1952, Allen Ginsberg sent her poems and she remarked, about one Ginsberg line, “‘I wandered off in search of a toilet”: “And I [the reader] go with you, remember. Do I have to?” Was this prudery or disappointed expectation of civility?

Right. She viewed Allen Ginsberg as the wayward son. She knew Lewis Ginsberg, Allen Ginsberg’s father, also a poet, and liked him. By the time she knew Allen Ginsberg late in life, her feelings had evolved into true prudery which was not unexpected for a woman in her 70s and 80s.

The index is very peculiar. It’s another example of her mind at work. I can’t tell always what she had in mind when she composed the index, but it was very much composed according to her sensibilities of what mattered.

How Poet Marianne Moore Was Inspired By the Jews