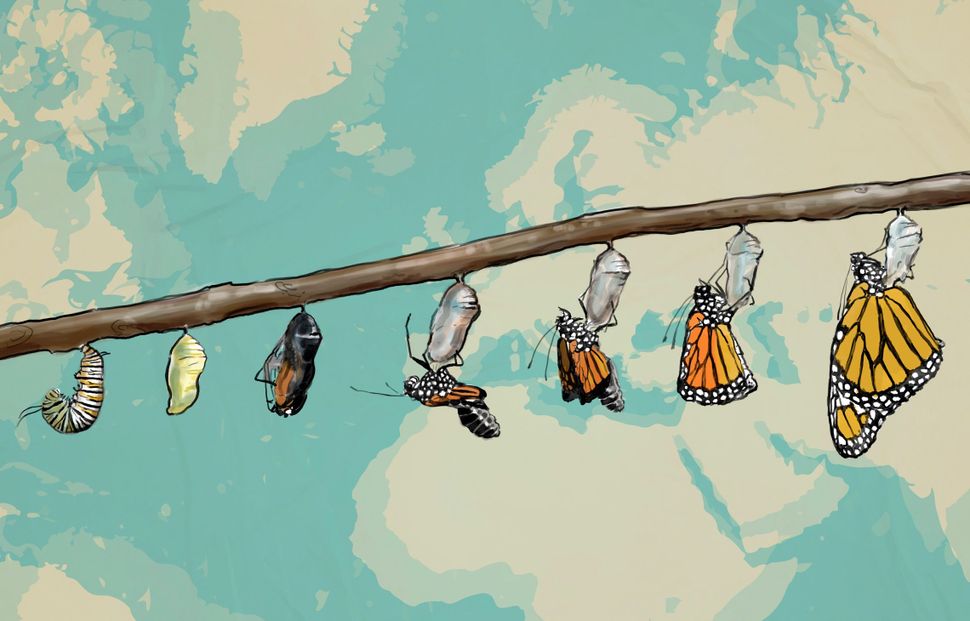 Some months ago, during an interview with a reporter, I remarked matter-of-factly, regarding my marriage of nearly 15 years, “ “I was a shitty husband.” The reporter looked alarmed, as if I’d confessed to hiding corpses in my basement. “Why do you say that?” she asked.

I hadn’t meant to be so self-denigrating; I meant only that I’d failed in my marriage the way we so often fail in relationships, especially when we’re young and selfish and have yet to learn the values of compromise and the messiness of other people’s feelings. My wife and I had married young, both of us 18. In a way, we grew into adulthood together, and sometimes we fumbled. We fought, lost our tempers, said things we later wished we hadn’t. My marriage ended nearly a decade ago, and it is only with hindsight that I think: I could’ve been a better spouse. I could’ve been a better human being.

Am I a better human being today?

I think of this especially during this Jewish month of Av, which speaks to me of transformation. Av was once a joyous month. Summertime in the Land of Israel, the grain crops harvested and the fruit ripening on the trees, the air festive, and young men and women dressed in the finest linens, forming dance circles through the vineyards. Then, on the Ninth of Av in 70 C.E., the Temple was destroyed, the long exile began, and Av became a month of grief and mourning.

Av will turn to gladness once again, though. The Messiah, tradition has it, will be born on Tisha B’av — the day we mourn the Temple’s destruction — and the day will be transformed into a festival. On the afternoon of Tisha B’av, therefore, we rise from the floor, straighten up the overturned benches and read the stirring words of Isaiah: “Nachamu, nachamu, ami. Be comforted, be comforted, my people. Speak tenderly to Jerusalem, and tell her that her sad days are gone.” Even in mourning, we hope for the Messianic Era, a return not only to joy, but also to a universe transformed. A utopia not only for mankind, but also for all of nature. “He will wear righteousness like a belt and truth like an undergarment,” Isaiah says of the Messiah. Even nature will be tamed, as wolves and sheep, lions and calves come together in a great zoological kumbaya.

It’s a sweet vision of a perfect world. Fantastical, sure, but it reminds us just how much transforming we need.

The corollary to collective transformation, though, is individual transformation — to become, each of us, better versions of ourselves. Unlike the repentance and forgiveness model of Yom Kippur, which is that cyclical, personal transformation occurs over a lifetime, the small changes in patterns and habits that add up, incrementally, to a change in character.

Curiously, though, collective and individual transformation seem to reflect each other as if in a funhouse mirror: When one is valued, the other appears to diminish. True, we wage fewer wars today, and commit less violence, but we’re also more savagely self-absorbed. We recognize many more rights for the historically marginalized, but we also feel more entitled than ever. We fight passionately for justice, but earnest, individual self-reflection strikes us as precious. We are passionate about changing the world, but hardly so passionate about changing ourselves.

Am I a better person today than a decade ago? I hold better political views, certainly. I want people to have health care, education, housing. I am troubled by our systemic racism and our many other inequalities. I worry about the state of our planet. I stood with Occupy. I voted for Bernie. I may canvass for Hillary in some swing state. Have I been transformed enough?

I am not so sure. Working for a better world is good, but it still allows us to be pretty awful as individuals.

From the sidelines recently, I observed an exchange on Twitter in which Shanelle Matthews, communications director of the Black Lives Matter network, turned bullying (linked tweet deleted) and abusive (linked tweet deleted) toward a Jewish anti-racism activist who asked simply to be heard. “Your beliefs and opinions are actively oppressing people,” Matthews declared, and I couldn’t help wondering: Can we really work for a kinder, more just world if we speak only with rage to friend and foe alike?

Perhaps decency is a lot to expect on social media, but mean-spiritedness so permeates our culture that we barely notice it. Last month, Republican vice presidential nominee Mike Pence suggested, “I don’t think name-calling has any place in public life,” and I thought, there goes a good man — until I remembered that he remains attached to a candidate whose entire campaign has been one long string of personal insults, and whose supporters have a unique penchant for vitriolic and violent outbursts. Mean-spiritedness being a bi-partisan sport, Jon Stewart, former host of “The Daily Show,” and previously a trenchant observer of all moral failings of the right, emerged from hibernation to call Fox News host Sean Hannity “Lumpy,” to which Hannity responded by calling Stewart “a fool,” neither of them speaking on a subject more substantive than the partisan bickering of TV pundits.

Yes, this is what we expect, but this is also how we like it. Some of us object to the idea of Donald Trump as president, but we’re happy to make him an entertainment icon. We salivate with fangs bared over the vicarious thrill of being mean to someone on national TV. We bathe in schadenfreude, luxuriating in the bubbles of someone else’s life imploding, over a bad relationship, a bad night out, a bad tweet. Sincerity? How quaint. Everyday acts of kindness seem so rare, the shaky phone videos of them go viral. We suddenly remember how good it feels to have our hearts warmed. A man lets another man sleep on his shoulder, and the world stands stunned.

The singer Joe Henry said recently, “If you exorcise your demons, your angels will leave too,” and I remember a brief time when I felt it acutely. It was years ago, after my faith had eroded, the demons of religious belief exorcised. Before I could figure out how to live without them, I sank into a kind of angry nihilism. F—k you, I’d think to the stranger holding the door for me at ShopRite. F—k you and your nice manners.

I began to drive my car more recklessly, endangering myself and others. A minor slight from another driver would ignite the thrill of road rage, primal, almost feral. I’d flip my finger and shout an obscenity, fantasize about the altercation turning physical. It was a breakdown of self-direction, as if I weren’t sure who or what to care about, and it manifested in generalized anger. It was also an experiment in cynicism. I had been an earnest boy, and then an earnest young man, and my training and religious beliefs had validated earnestness’s value. But what was it worth now, when I had no faith to demand it, and no culture to value it?

More important, could I live without it?

It turned out that I couldn’t — or at least found it too unsettling. I missed the little things that made me believe in myself as a moral agent in the smallest ways, able, if I chose, to make someone smile, to relieve a burden, to do the right thing rather than the convenient one. The trouble was not in knowing what kind of person to be, but in what value system to fit it in.

If the moral strength of Enlightenment values is to obligate humanity to grant liberty and justice for all, it fails to inspire us as individuals to give a daily dollar to charity, to visit the sick and comfort the bereaved, to be kind to family and friends even on a bad day. For such things, only a spiritual worldview provides.

Conversely, if the great strength of religious societies is to nourish our instincts for goodness, their weakness is to be blind to collective injustice. Pope Francis, for all his personal humanity, won’t override the doctrinal injustices of the Catholic Church, such as keeping women out of the priesthood or denying gay people the right to marry. If the fervently Orthodox Jewish world contains exemplars of human kindness, it is also blind to its parochialism and unique institutional injustices — the denigration of those who do not conform or the poorly pedigreed, and the protection of the powerful over the weak and vulnerable.

Am I a better person today?

Honestly, I am not sure, but I’ve certainly learned some things, most importantly this: We cannot transform a world without also transforming as individuals. As for being a better spouse, I remember something my mother told me in the weeks after I was married. “Marriage is not a give and take,” she said, “it is a give and give.” At the time, I questioned the sense of that, but I can see its wisdom now. Some of us envision a better world by demanding more of others. But to demand more of yourself, I think, is by far the greater virtue.

Shulem Deen is the author of “All Who Go Do Not Return.” Follow him on Twitter @shdeen