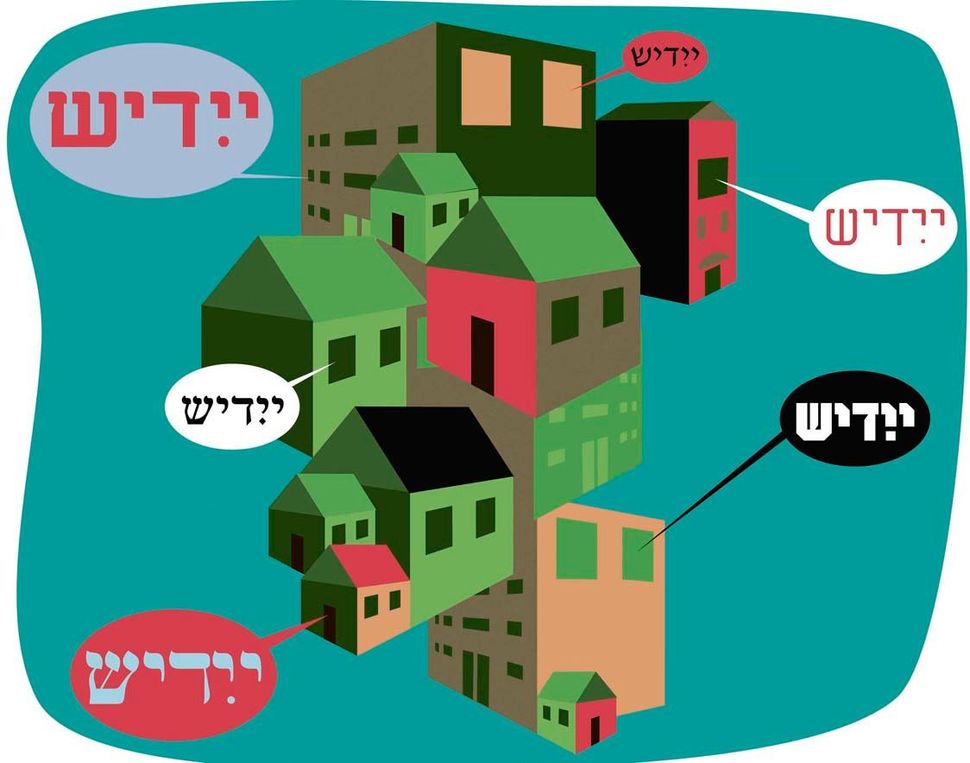 There once was a place known as Yiddish Land. It wasn’t a country. In fact, it lived and breathed for a thousand years in total disregard for the invisible borders sovereign nations fought and died over. Its citizens — German Jews, Polish Jews, Jews throughout Central Europe and across the world — numbered nearly 12 million, and they were connected not only by faith but also by mother tongue.

It took an event similarly unbound by the petty demarcation of nation-states and fueled by a hatred of the Jewish people to rip the heart out of Yiddish Land. Of the six million Jews murdered in the Holocaust by the Nazi Party and their collaborators throughout Europe, two-thirds spoke Yiddish.

For many, that’s where the story of Yiddish Land ends, said Agi Legutko, the director of the Yiddish language program at Columbia University. But almost a century later, American Jews in search of connection and identity are harkening back to the land that was — and they’re (figuratively) looking to become citizens.

Yiddish has remained prevalent in some segments of the Hasidic world as a common language, used to avoid profaning the sacred Hebrew of scripture, but until recently, the use of Yiddish among more “secular” Jews was nearly nonexistent, Legutko said.

She told the Forward that she has found three main reasons why learning Yiddish is increasingly popular, chief among them the search by millennial Jews for roots.

“It goes back to that old theory,” she said, in reference to a famous essay by American historian Marcus Hansen. “The first generation tries to make it, the second tries to forget it, and the third tries to remember.”

In Ken Richmond’s family, the only Yiddish he heard was peppered among the jokes his grandparents told. But thanks to his love of klezmer music, he began to learn Yiddish in earnest during an intensive program hosted by the YIVO Institute for Jewish Research — coincidentally, at the same time as the woman he would marry.

Richmond is now the cantor at Temple Israel just outside Boston, and he and his wife, Rabbi Shira Shazeer, speak only Yiddish at home with their three sons, ages three, seven and nine. At their school, MetroWest Jewish Day School, the boys speak English and some Hebrew.

Raising their children in Yiddish hasn’t always been easy, Richmond and Shazeer agreed, particularly when it comes to finding books for their children.

There’s a lot being published in the Hasidic world, but they said they have to screen those books to make sure there aren’t messages that clash with their worldviews.

“Songs and lullabies were easy,” Shazeer said, laughing. “I grew up with that. But stories are harder to find.” As a child, Shazeer’s father would speak Yiddish for a few hours and then switch to another language — Hebrew, French, Spanish. Having grown up with various languages himself, he felt that the more languages one had, the better, Shazeer said.

In recent years, the small secular Yiddish community in the United States has started to pump out translations of popular English children’s books, as well as produce its own. As the Internet has made it easier for Yiddish speakers across the world to connect, more literature has become available.

“Yiddish Land was famously this land without borders, spreading all over the world,” Legutko said. “Now, I think the Internet community has taken this on.”

Richmond and Shazeer had often thought about raising their children in Yiddish, but by the time they had their first son nearly a decade ago, the idea had been forgotten. Their Yiddish got rusty, Richmond said.

But after their second son was born, Richmond and Shazeer decided to take their family to Yidish Vokh, or Yiddish Week, and were amazed by everyone speaking Yiddish with their children. By the end of the week, they decided to give it a try themselves.

Yiddish Week was founded nearly 40 years ago by Yiddish linguist Mordkhe Schaecter, the father of The Forverts editor, Rukhl Schaechter, as an immersive weekend retreat for his students. It attracted a small number of people. Now run by the Yiddish youth movement Yugntruf, the annual event brings more than 100 diverse people together to speak Yiddish and attend lectures in Yiddish on topics such as arts and sports. Jordan Kutzik, a staff writer at the Forverts, is the organization’s chairman.

It’s important as a kid to have Yiddish-speaking peers, and every generation at Yiddish Week has found a close-knit group, said Meena Viswanath, a former chairperson of Yugntruf and Schaecter’s granddaughter.

As a member of the Schaecter family, Viswanath grew up with Yiddish her first language, but it wasn’t her only non-English one. Her father, who was from India, also spoke Tamil at home. But still, the Modern Orthodox world in which she was raised could be fairly insular, Viswanath said.

“I had an extra dimension in my life because I was exposed to a whole world of non-religious and even non-Jewish culture through Yiddish,” she said. “It allowed me to meet people and interact in other ways that other 10-year-olds wouldn’t have.”

Ever since she was born, Viswanath has been going to Yiddish Week, which she said gave her an experience separate from her peers in the Orthodox community — something she was proud of.

Yakov Blum rarely heard Yiddish growing up in a Modern Orthodox community in Flatbush, Brooklyn, apart from the casual Yiddish word that finds its way into everyday English. In fact, the thought of learning Yiddish never crossed his mind while he was studying math and linguistics at college — until he met a girl.

“I had a girlfriend that I thought knew some Yiddish, and I figured I’d surprise her with it,” Blum told the Forward.

Instead, upon opening a Yiddish textbook, he became infatuated. Blum began teaching himself the language and engaging in the Yiddish community, including Yugntruf, of which he is currently a board member.

In 2005, after he finished college in Santa Barbara, California, Blum moved to New York — where he hadn’t lived since he was 13 — and built a network of friends through his Yiddish connections, he said.

One of those friends was Naftali Ejdelman, another Schaecter family member, and the son of Rukhl Schaechter, whom Blum lived with for a year in an apartment a few blocks away from the Columbia University Hillel. With Yisroel Bass, they came up with the idea for the Yiddish Farm.

Founded in 2010, the Yiddish Farm, where Blum currently teaches, is an immersive Yiddish-learning community in upstate New York. Blum’s pupils have included his mother and siblings, all of whom learned Yiddish on the farm. Unlike Yiddish Week, which lets families just “exist” in Yiddish, the farm is meant to teach it, Blum said.

While speaking Yiddish with his family is important to him, Blum said that speaking the language is also about connecting with Jewish heritage in a way he feels has been lost.

Even with the creation of the Jewish State of Israel in 1948, Yiddish remained dormant. The official languages of the new country were Hebrew and Arabic. And in many ways, Yiddish was frowned upon.

Blum, who lived in Israel and speaks Hebrew fluently, said it is Yiddish culture that connects him to his heritage, not Israel, explaining that the culture feels richer than Israeli culture.

Although Blum still considers himself Orthodox, he said it isn’t enough for him anymore. The Modern Orthodox world feels assimilated to American culture, he said, but Yiddish offers a way to have his own world and Blum is not alone in his search for what he sees as a more authentic connection to his heritage. Legutko said that Yiddish has become a way to create an alternative Jewish identity that is not built on faith or Israel.

“There’s a little bit of a rebellion aspect to embracing Yiddish,” she told the Forward. “For those who aren’t observant and don’t feel a deep connection to Israel, it is the perfect alternative: an authentic, very rich Jewish culture that developed in Europe for over 1,000 years.” Blum agreed.

“One of the patterns of people drawn to Yiddish today is that they don’t seem entirely satisfied with the major mainstream ways of being Jewish, religion or Zionism,” he said. “I think Yiddish is a bit of a third path.” Most importantly, Yiddish can serve as a bridge for an American Jewry that overwhelmingly says remembering the Holocaust is what it means to be Jewish in America today.

The six million Jews killed in the Holocaust have become one of the pillars of Judaism and Jewish identity — but without knowing Yiddish, it’s hard to have a real understanding of who those people were, Blum said.

“One of the things that I’ve felt ever since I started learning Yiddish was a much more palpable and deep understanding of what was actually lost in the Holocaust,” he said. “It’s something, kind of like a grief, that I carry around that I didn’t before. I think by ignoring Yiddish and thinking it is the past, it means willfully not confronting the enormity of what was and what was lost.”

For Richmond and Shazeer, Yiddish offers a completely different way of thinking that connects them to the past. “It seems like there’s something lost when you lose a language, certain ways of thinking and understanding the world,” Shazeer said. “I want my kids to have better access to that.”

Now that their kids are playing musical instruments, Richmond and Shazeer also want to share their love of Yiddish music with their sons, so they started a family klezmer band. They’re still thinking of a name, Richmond said, laughing.

“[Yiddish] is certainly a beautiful, expressive language,” he said. “We figure this is something special and unique we can give our kids. So far, they seem to enjoy it.”

Viswanath, whose family deserves credit for sparking a new life for Yiddish in America, is currently teaching her one-year-old son Yiddish and said that even when she meets Jews across the globe, Yiddish can help her connect with those communities. Often, Yiddish acts as a marker of belonging, she said.

However, Viswanath said it’s important to maintain diversity within the Jewish tradition rather than everyone having the same cookie-cutter version of Judaism.

“It’s important to me to pass it on because not so many other people are,” she said. “I don’t think every Jew needs to go out and learn Yiddish, but it will always be important as a part of the broader cloth of our Jewish culture.”