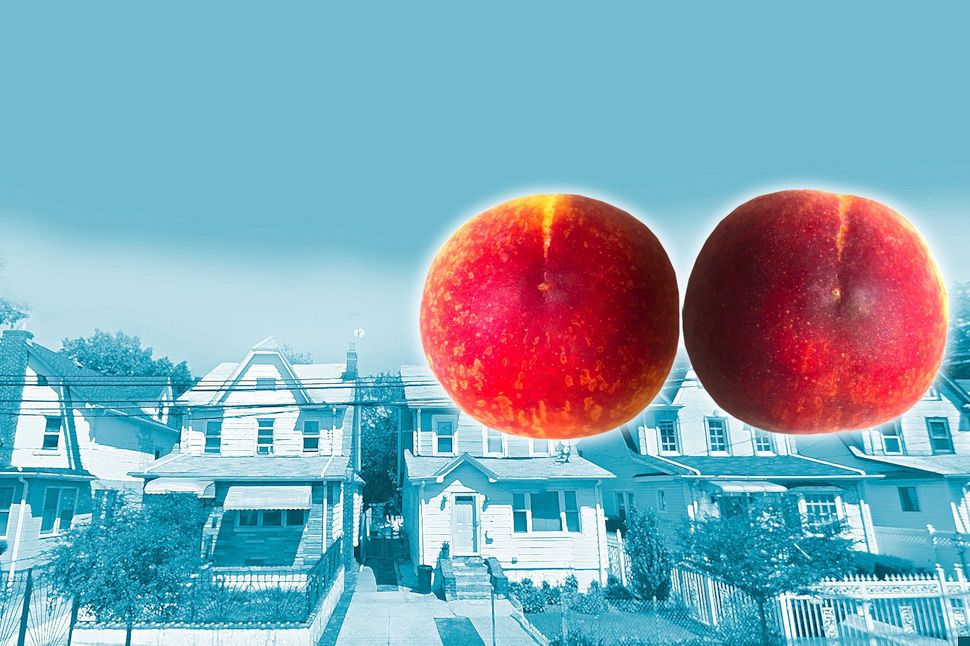 I was 8 years old and was standing on the front lawn of my house in Queens with my little sister, who was 4. We were standing under our favorite tree — a peach tree, a glorious, bursting peach tree, laden and heavy with ripe, fuzzy fruit. Lots of times, my sister and I would play together in the middle V of the tree —the shiny green leaves hiding us from all the neighbors. But that day we were both standing under the tree. And we were both crying.

Just a few minutes before, an enormous blue car had driven up to our house.

Out of the car came our cousin Estee Veissman, who was older than even our mother.

We could never figure out exactly how such an old woman could be a cousin and not an aunt.

She had enormous hair. Enormous teeth. And enormous bazooms.

We had never seen anything like those bazooms. They stood out a few feet in front of her, pointing to different time zones.

They were their own wonders of the world — cantilevered miracles.

She just stood on the sidewalk, barely out of the car, and stared at the peach tree.

And then Cousin Estee Veissman did something I will never, ever forget:

She reached into her pocketbook and pulled out something that looked like a little baggie.

She gripped that little baggie in both hands, shook it violently, and — FA-FOOOOOOOM!

That little baggie turned into the most gigantic — yes enormous — bag we had ever seen.

And then, Cousin Estee Veissman did the other something I will never, ever forget: She started to pick peaches off our tree. One, two, three, 100.

And my little sister and I stood watching it all, watching those peaches disappear into that bag.

Finally we could stand it no longer.

We turned and ran into the house. “Mommy! MOOOOOMMMMMY!!”

My mother put her arms around us.

Was there a hint of a smile there? A smile, definitely.

“She lives in an apartment in Brooklyn, and it’s exciting for her to pick peaches off a real tree.”

Yeah, all of them.

“Next year we’ll have lots of peaches, again.”

Yeah, and next year we’ll have a visitor from Brooklyn, again.

My sister and I didn’t learn our lesson in generosity that day.

We sat and glared at Cousin Estee Veissman as she ate the dinner of fried chicken, coleslaw and potato salad that my mother bought from Mauzone on Main Street, and that we had every single Sunday evening, like every other Orthodox family in our neighborhood.

Cousin Estee Veissman’s voice was clipped, her eyes sad. Her bazooms remained — defiantly — upbeat. Eventually I would learn that Cousin Estee had been suffering from schizophrenia, what we now call severe bipolar disorder. Depression. That she’d been in and out of hospitals. That nothing worked, nothing brought her out of it. It had been going on for years and years.

Her three children and her husband, who was actually a pretty jolly guy, didn’t talk about it. They were very frum, very religious, so these kinds of things back in those days were a shande, a bit of a disgrace — and not to be mentioned.

“Mama is sick,” they would say. And that was that. The years went by, with many more Mauzone Sunday night dinners, and although the rest of her family often came, she did not. The last time I saw her was at her son Abner’s wedding. Abner was finally getting married — at 45 — and to an old high school friend of mine! It was the first time I ever saw my cousin smile. Just a slight lift of the corners of her upper lip — but a smile, definitely.

But most of all, I want you to know that you have a little more nakhes. Your son Abner and my high school friend finally had a baby boy. I wish you could see him. He has big blue eyes. He smiles a lot.

And you’d love his hair. It looks exactly like peach fuzz.

Lisa Mayer was a Clio-award winning copywriter on Madison Avenue in New York City. She now lives with her rabbi husband in Auburn, Maine, among the moose.