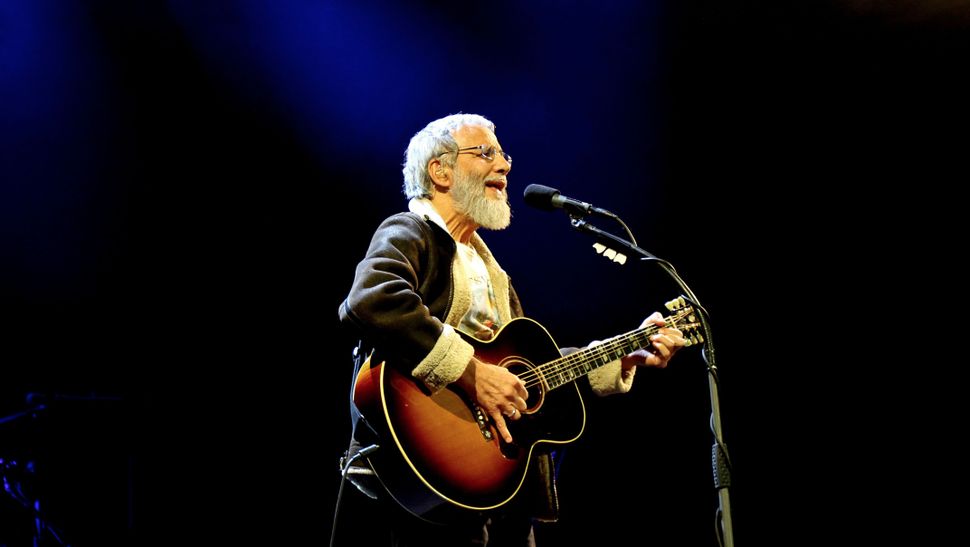 When I went off to sleep-away camp in 1972 for the first time, the soundtrack of the summer — especially for those like me, who arrived with guitar in hand — was all Cat Stevens, all the time. By 1972, Stevens had already achieved his greatest success with a stunning trio of albums released in the previous two years that, as much or more than the work of anyone else, established the category of “singer-songwriter,” a term that hadn’t even been coined before then.

Not all, of those songs were relatively easy to strum on the guitar, but most were. The melodies were sweet and catchy and easy to sing, and I buried myself so deep inside them that I could even pull off a passable imitation of Stevens, enough to propel me onto the stage of camp “assemblies,” those morning variety shows featuring performances of all kinds, by campers and counselors and staffers, that built community first thing in the morning after breakfast.

It was then and there that I was let in on a shocking secret: Cat Stevens’s real name is Steven Katz, and he cleverly switched it around to sound more like an entertainer and to hide his Jewishness. Never mind, of course, that Cat Stevens was in fact Steven Demetre Georgiou, born two months after the establishment of the State of Israel in London to Stavros Georgiou, a Greek Cypriot, and Ingrid Wickman, a Swede of Greek Cypriot descent. Never mind that an astute listener might have even figured this out by merely listening to the song “Rubylove,” found on “Teaser and the Firecat,” in which Stevens sang in fluent Greek — not Hebrew — with music that featured the sound of the bouzouki, not the violin or clarinet. For a while, at least, Cat Stevens, who sort of looked Jewish in a Greek kind of way, was one of us, and his songs, hippie-ish anthems like “Father and Son,” “Peace Train,” “Wild World,” and “Moonshadow,” became our summer-camp liturgy. It wasn’t, after all, too far of a stretch to find Jewish themes being played out in some of those numbers. What was his big hit, “Peace Train,” if not an anthem of messianic longing: “Oh I’ve been smiling lately. Dreaming about the world as one. And I believe it could be, some day it’s going to come.” What was “On the Road to Findout” (sic) other than a retelling of the story of Abraham? “Well, I left my happy home to see what I could find out.I left my folk and friends with the aim to clear my mind out.” And what was “The Wind” if not a paean to the soul, playing on the Hebrew word ruach, which means both “wind” and “soul”: “I listen to the wind, to the wind of my soul. Where I’ll end up, well I think only God really knows.”

For the rest of the decade, Stevens’s music as well as his thematic concerns would meander. The album title “Catch Bull at Four” was inspired by one of the Ten Bulls of Zen; “Foreigner” was an experiment in jazz-fueled rhythm and blues; “Buddha and the Chocolate Box” included a song called “Jesus” that also invoked the Buddha of the album title, and “Numbers” was a concept album evincing Stevens’s interest in numerology. Stevens was a restless seeker, and of course we all know where he landed at the end of the decade, after the one-two punch of having a near-death experience almost drowning off a beach in Malibu, and having been gifted a copy of the Quran¬, bought by his brother, David Gordon, during a trip to his Israeli wife’s hometown, Tel Aviv. Gordon knew that his brother — who once sang that “the answer lies within, so why not take a look now? Kick out the devil’s sin, pick up, pick up a good book now” — liked that sort of thing. He would have had no idea, however, where it would lead. In short order, Stevens became a Muslim, changed his name to Yusuf Islam, fulfilled his contractual obligations to his record label, said goodbye to his career as Cat Stevens, auctioned off all his musical instruments and gave the proceeds to charity; he devoted the next two and a half decades of his life in large part to Muslim education and humanitarian causes.

Fast-forward through controversies surrounding the Ayatollah Khomeini’s fatwa regarding Salman Rushdie’s “The Satanic Verses” (Yusuf, as he is now known, says he didn’t and doesn’t support executing heretics), and Stevens’s alleged financial support of Hamas (he says he opposes terrorism and Islamic extremism), Stevens finding himself on an American no-fly list (a spelling error, he says), getting deported twice from Israel (he just can’t shake the Hamas accusations), and his gradual reemergence in the public arena as a musical performer, first strictly with new works of an Islamic bent but in more recent years with new recordings as Yusuf that pick up where Cat Stevens left off in 1979.

And now, coming full circle, Stevens, now 68 years old, is returning to the American concert stage with “A Cat’s Attic,” a dozen-date tour, billed as “Yusuf / Cat Stevens,” promising to play old hits as well as new songs, on the 50th anniversary of his first hit single, “I Love My Dog,” from his pre-folk years in the late-1960s as a British pop star. (Perhaps ironically, there are several hadiths in Islam that look askance at keeping dogs as pets.) The tour will stop at Manhattan’s Beacon Theatre for two nights, September 19 and 20, his first public shows in New York City since 1976, when his Majikat tour stopped at Madison Square Garden and I was in the audience. He will also appear as a special guest at the Global Citizen Festival in New York City’s Central Park on September 24, along with Rihanna, Kendrick Lamar, Eddie Vedder and Metallica.

Alas, I won’t be in the audience at the Beacon this time. Not at $300+ a pop for tickets. I don’t begrudge him the money if he can get it, but that’s a little pricey for my budget. Even for Steven Katz.

Seth Rogovoy is a contributing editor at the Forward and the author of “Bob Dylan: Prophet, Mystic, Poet” (Scribner, 2009). He is a recipient of a 2016 Simon Rockower Award from the American Jewish Press Association for excellence in arts and criticism.