The Dark Night of Louis CK 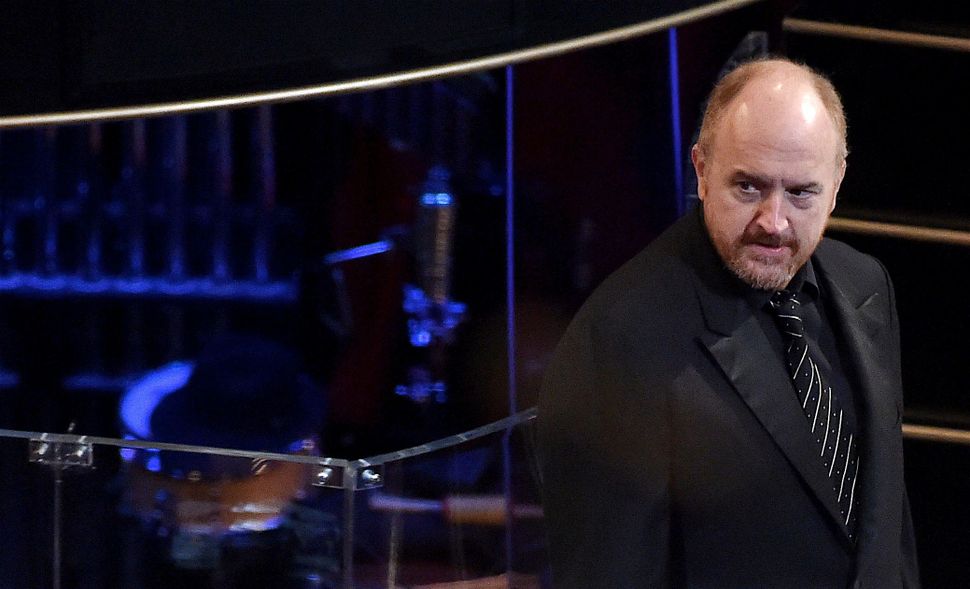 The CK of Louis CK stands for Székely — the family name that was passed down to him from his Hungarian Jewish forbears. But my connection to him is more significant than the shared religion of his Hungarian and my Lithuanian ancestors.

He’s three years older than me with two daughters (11 and 14) each three years older than mine, living around the corner from me in Manhattan. Watching his darkly comic autobiographical tv show “Louie” I can’t help thinking that his life of bitterness and self-loathing could be mine in three years, given a less tolerant wife and an extra 20 pounds. Well, that, and of course a laceratingly dark comic genius that cuts through the diseased flesh of our 21st century assumptions to the funny bone of our shared humanity.

He was playing at Madison Square Garden, our home venue. I had to go.

I’d luckily managed to score a Hamilton ticket in August — it was unsurprisingly excellent. But that bright fresh re-telling of a founding New York story didn’t get me in the guts. This brooding, festering exploration of fatherhood in contemporary America was my Hamilton. We had to turn off our phones, I didn’t have a pen, any quotes in the below are what are imperfectly seared into my memory.

Apart from pulling sports jerseys over bellies, middle aged men in their 40s and 50s don’t tend to dress like their heroes. But CK is the spokesman of our part of our generation. Even though he barely finished high school and is now a major star he embodies the thoughtful, liberal, mostly white (hence mostly privileged) middle classes who are doing ok but, in recognizing the injustices of society and hypocrisies of our daily life, recognize how we could have done better for the world. This insight places us on the spectrum of self-loathing.

Especially us fathers. We wear our male pattern baldness and goatee as a badge of belonging. We identify as respectable elders but feel like tired 20 year olds inside. CK zeroes in on this, explaining how he now anticipates naps in the same lustful way he used to hope to get laid. Everything is grist to the mill of disgust. “No one ever got up from a nap and thought oh no, that’s going to be awkward. Guess I can’t go back to that restaurant.” Isolation is damage limitation. Relationships are illusory. “You’re alone or you’re in something shit,” he repeats.

The audience has surprisingly many non-middle aged men. I feel like I’m authentic in an age where authenticity itself is obsolete and all that matters are Facebook likes. Like I’m wearing my “Born in The USA” t-shirt from 1984 to a Springsteen concert and no-one notices. There are high schoolers and pensioners. There are women in the audience. Even young women, closer to CK’s daughters’ ages than to his. I’m not sure that they are peering over the same abyss as CK and me. But I’m glad they’re here. If these people can appreciate the nihilistic craft of one 50-year old dad, there’s a kind of despair-flavored hope for all of us.

The audience is mostly white. The set is unremittingly dark. The language filthy. The delivery is idiosyncratic, unrepeatable. The abortion shpiel segues into suicide patter. The suicide discussion reappears throughout the entire performance as if it’s only his daughters and the challenge of his stagecraft that give him a reason to get up in the morning, for one more day at least. “I constantly want to kill myself, but then, too, there’s stuff I want to do… Naps are a chance to kill yourself and take it back.”

We revel in CK’s ability to get to saying the least PC thing in an arguably PC way not only because he can simultaneously excoriate the anti-PC bigots and the sanctimonious PC-police but also because he gets to say totally unacceptable things, and rude words loudly, and unapologetically, in public. The abortion section centers around the rhetorical opposition: “Either having an abortion is like taking a dump…, or it’s like killing a baby.” His vacillating tone and delivery is impossible to render in a review, but he lingers lightly on each side of the debate, entertaining one side (“abortion is killing a baby”) and then the other (“abortion is just like taking a dump”). He’s deadly serious as he jokes about both sides of the debate and follows through the logical and social ramifications of both. “I believe women should be able to kill babies,” he says with a dark, ambiguous chuckle. But also we know that “everyone hates the people with signs outside abortion clinics. [segues into a precious, maybe gay, accent] ‘I believe that abortion is killing babies, but there’s no need to be a dick about it.’”

CK’s persona is a man who doesn’t care whether he lives or dies or sounds like an asshole. He reaches for third rails. He pushes things over the edge. He’s wearing a dark suit to give the occasion gravitas. His bouncer gone-to-pot menace gives the performance an edge. His profound understanding of the way that privilege is structured and unmentioned gives his transgressions cover while leaving them raw. He whips us. He’s sorry/not sorry.

Writing this for the Forward there’s a compulsion to find the Lenny Bruce in this, the outsider view, the immigrant shtick. “My father was a Mexican. [beat] But I’m not. Just because my mother [slept with] a Mexican for years doesn’t make me a Mexican. Just makes her a whore.” But it isn’t really Jewish in any way. It’s sui generis. He starts a segment with “Why did the chicken cross the road?” It’s another challenge, can he make the most banal start of a joke into a contemporary and transgressive story that teeters on the racist? (Spoiler: he can.)

We laughed for over 100 straight minutes of his stand up despite the horror of the content. If Jon Stewart’s indignation set the tone for the Bush era, CK’s self-loathing and despair — even as he sits in the belly of the whale heading away from politics — sets the tone for the Trump-era.

The set feels like Shakespearean tragicomedy with a dash of the epic truculence of the prophet Jonah. Jonah is the entitled prophet, the sulky prophet, the one who’d rather flee God than deliver an unwelcome message to the sinning city of Nineveh, who’d rather God destroy that city than lose face, who’d rather curse God for killing the “gourd” plant that had been sheltering him from the sun. CK is a non-didactic prophet in a godless world. Unlike the three warm-up comedians who each came on for 10 minutes, there’s nothing party political at all. It’s all about CK. God, society, homosexuality, education, myth, race all are raked over the coals of his self-loathing experience.

He takes on beloved institutions and sacred figures. Whether marriage, old-man Jesus (not killed on the cross, still sermonizing in his old age to an increasingly bored crowd), public schools, or abortion, no matter the subject CK’s had an experience — real or imagined — that can destroy your preconceptions. Punctuated by head-in-hands despair at himself, he’s like Marlon Brando in Kurtz mode one minute, playing Caliban for laughs the next.

The Dark Night of Louis CK