80 Years Ago, Jewish London Fought Off the Fascists on Cable Street 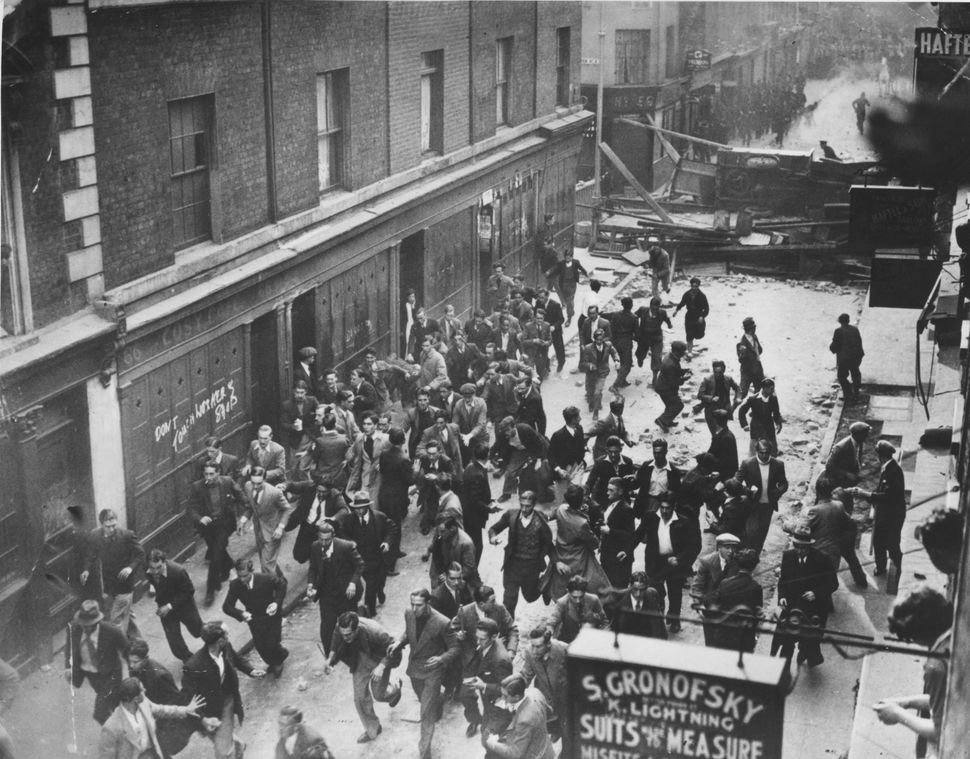 The Battle of Cable Street Image by Getty Images

“They had a bloody cheek to come and demonstrate in a Jewish area, don’t you think so?” declares Hannah Grant. The 95-year-old great-grandmother is reminiscing about a moment in British Jewish history that took place exactly 80 years ago. But the outrage in her voice is undimmed by the decades.

“The chutzpah of it — to march through a Jewish area, targeting mainly immigrants working hard to earn a bloody crust,” she says. “They were not going to get through. And they didn’t.”

In an old age home in Edgware at the very north of London, two of Grant’s friends are watching in admiration as she recalls what life was like at her home at 183 Cable Street in the East End.

“It’s all very much alive,” she says.

The Battle of Cable Street may hold little resonance for the average Brit, but to those who were there, it was a rare and delicious moment of victory. As the jackboot of fascism marched across the rest of Europe, Britain’s Blackshirts were roundly defeated by a rag-tag mob of men armed with chair legs, housewives tipping chamber pots out of upstairs windows and children rolling marbles under the hooves of police horses.

On Sunday, October 4, 1936, Sir Oswald Mosley, the leader of the British Union of Fascists, attempted to march down Cable Street — right through the heart of the Jewish East End. What he and his thousands of goose-stepping members (dressed in uniforms styled on Mussolini’s Blackshirts) hadn’t reckoned on was the strength and solidarity of ordinary Londoners, indignant at the blatant provocation.

An estimated 200,000 to 300,000 residents formed road blocks and cut off the fascists’ route, with the ‘battle’ itself then taking place between the East Enders and the police — determined to do everything they could to allow the fascists to pass.

Grant, one of the last of a tiny band of surviving veterans, had been told by her parents in no uncertain terms, “Don’t you dare go anywhere near it”. But there was no way that this politically engaged and rebellious 15-year-old was going to miss out on the action.

“I just went, sneaked off on my own,” she says. “I was politically involved since I was a child. It’s just in my nature. So while my friends were playing hopscotch, I’d be enjoying myself at a political meeting.” Grant publicized the protest door-to-door and helped raise funds, but admits that she didn’t play a great part in the street battle: “I was probably just a nuisance. But I did take marbles in my pocket. As the police horses came along, you waited, to get them under and the horses would then slip and lose control.”

She clearly remembers one of the speakers from that day, Max Levitas. The Dublin-born activist was a key organizer in the run-up and acted as a message runner, as well as rousing the crowds with impassioned oratory.

Levitas still lives in the East End, by himself on the fourth floor (no elevator) of a block of flats on Sidney Street — aged 101. Immaculately dressed in shirt and tie, the former tailor tells me how he had already been battling Mosley two years before Cable Street, daubing slogans including “Down with Fascism” on Nelson’s Column in Trafalgar Square. Police spotted white paint on Levitas’s shoes and he was arrested and fined £5.

“It was a lot of money back then,” he says. “But it was paid and we said we’ll still continue the fight against the fascists to ensure that they do not hold back the battle for socialism.” 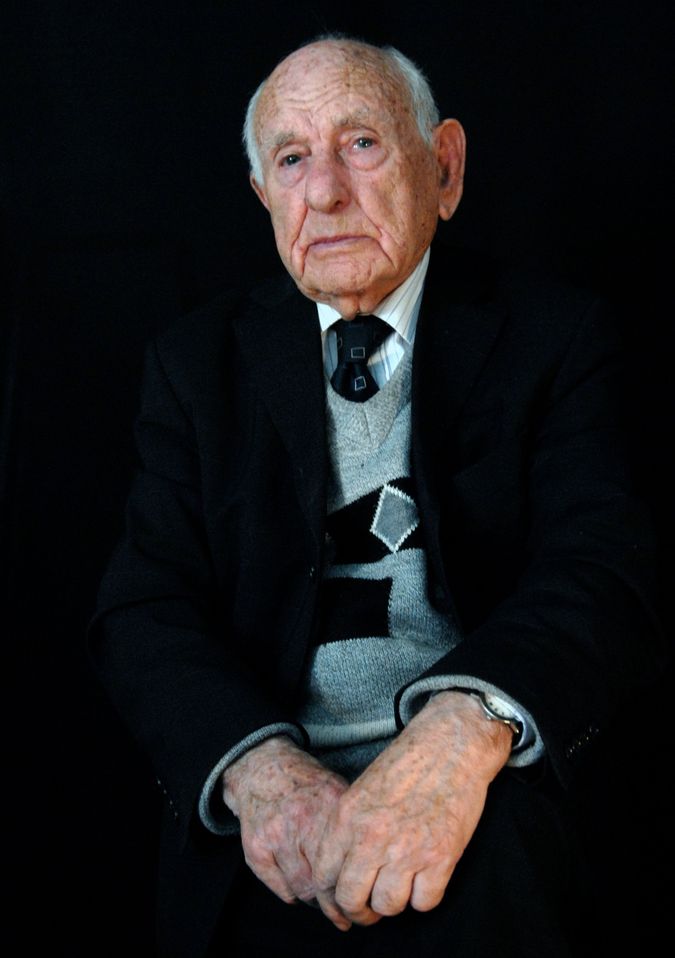 Levitas is clear that this was not just a Jewish victory: “I think it’s a brilliant part in working class history.” Indeed, it wasn’t just the Jews who turned out to fight. As Grant is also at pains to point out, it was as much the Communists, trade unionists and Irish dockers who saved the day. “It was Jews and gentiles together against Mosley; that was for me one of the proudest things. There was a unity, thank God for it,” she exclaims.

At Jewish Care’s day centre in Stepney, just a mile from Cable Street, 99-year-old Beatty Orwell recalls her experiences over a lunch of chicken soup, roast chicken and parsnips and baked apple and custard. She is accompanied by a kind of Greek chorus from friends Amelia Finger and Rene Stack.

“If you’d have seen that crowd, you’d have said they could never never get through. There would have been bloodshed really,” says Orwell, a former textile worker who has lived in the East End her entire life.

“Oh, yes, she was well in it, Beatty!” chips in Stack, 90, who declares that the police were almost as much the enemy as the fascists. “Police would pick on my brother because they knew he was Jewish,” she recalls. “Even my aunt, elderly woman, was dragged away by the police, she was screaming at Mosley so much, when he was speaking on the street in Brick Lane.”

Orwell, then 19, remembers the politically fraught time that led up to the Battle. She says she would “never go down Bethnal Green Road” for fear of being attacked. “Because the fascists used to wear big belts with a big buckle and that’s what they would hit ‘em with. They would break the windows of Jewish shops.”

“All their lives, the Jews had a bad time, from Russia to here,” adds Millie Finger, 99.

Of the day itself, Orwell describes the overturned lorry that formed one of the main barricades, the “fascists all lined up” near the Tower of London and the all-day “scuffles”. “They shall not pass!” Stack interjects, roaring the slogan of the day, which was inspired by the Spanish Civil War motto “No pasarán!” 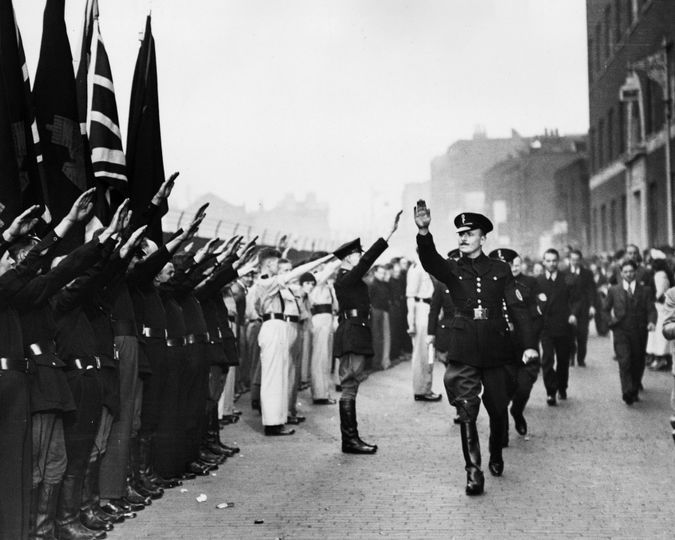 Bernard Kops, just ten in 1936, remembers the event as “sensational”, he tells me from his home in West Hampstead. It was a riot of noise – “the blowing of whistles and banging of kettles and saucepan lids”. He had grown used to hearing racist chanting: “The yids, the yids, we’ve got to get rid of the yids!” and had even seen his brother hit over the head with a police truncheon.

So perhaps it’s little surprise that Kops, now 90, sums up October 4 as “holiday time”, when London’s Jews ceased to be victims of Blackshirt intimidation.

Eventually, the authorities were forced to divert the fascists away from the Jewish area and the cockneys declared victory. “There was screaming, you can’t imagine,” says Orwell.

“We celebrated, we shouted, we sang the Internationale and the Red Flag,” recalls a jubilant Grant.

Levitas, who still has the air of a soapbox orator about him, adds: “I don’t drink, but I made a speech thanking the people and promising to ensure that with our own strength ‘ not with police strength — we will stop fascism growing in the East End of London and other parts of Britain.”

After the celebrations, a sheepish Grant had to return home to face the music. “Well, they weren’t very pleased with me,” is how she sums up her parents’ reaction, before adding with a smile: “I think secretly they were quite proud. They wouldn’t admit it.”

But her mother and father weren’t the only ones urging people to steer clear. Famously, the community leadership, the Board of Deputies of British Jews, told everyone to stay at home. The Jewish Chronicle “urgently warned” its readers: “Jews who, however innocently, become involved in any possible disorders, will be actively helping anti-Semitism and Jew-baiting.”

“It was absolutely ridiculous and we laughed that one off afterwards,” says Kops. Grant adopts a posh accent and replies: “Oh, yes, stay at home, have nothing to do with it.

“No bloody use! The Board of Deputies didn’t live in the East End, they lived in the hoiche fenster!” (“It means high windows in Yiddish,” she adds by way of explanation, “because a rich person’s house would have big, tall windows.”)

For many Cable Street veterans, the events of that day sparked a life-long campaigning zeal. They have inspired Kops, a writer, in many of his poems, books and plays.

Grant, who taught Yiddish well into her 80s, was a leading light in the Campaign for Soviet Jewry, demonstrating on refuseniks’ behalf and visiting them in Moscow – where she yelled at the KGB to f—k off (though Grant does without asterisks in the story’s retelling). Orwell, now a great-grandmother 18 times over, went on to be mayor of the borough of Tower Hamlets before serving as councillor for ten years in the 1970s and 80s.

And Levitas, former councillor of 15 years’ service, was waging war with the authorities as recently as last year.

Two days after the Battle, Mosley married in Joseph Goebbels’ drawing room, with Hitler as special guest. Later in 1936, the government rushed through the Public Order Act, which banned the wearing of political uniforms in public and required police consent for marches. However, the immediate aftermath saw a surge in support for the Blackshirts. Shortly after the outbreak of war in 1939, the BUF was banned altogether, with Mosley imprisoned as a Nazi sympathizer. And as the decade came to an end, in mainland Europe’s Jewish communities, the story would be void of victory.

“It was the beginning, wasn’t it, of the plague going through the world,” says Kops, “and that’s why it stands in history as a turning point. We were to become the litmus test for the rest of the world.”

For details about a month of commemorative events in the East End, visit: Cable Street 80

The Cable Street Festival at the JW3 Jewish Community Centre starts on October 6.

80 Years Ago, Jewish London Fought Off the Fascists on Cable Street