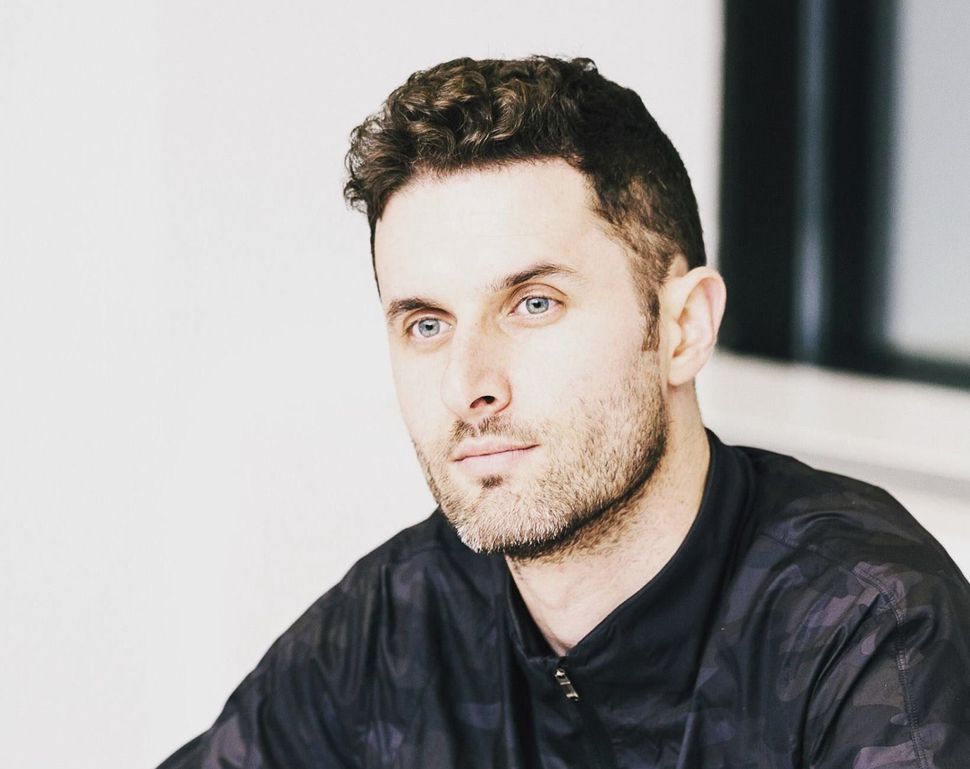 While the founder of JSwipe (which is often dubbed the Jewish Tinder) describes himself as a “post-affiliation” Jew, he’s accomplished what scores of religious rabbis and traditional grandparents could only dream of doing: He’s matchmade hundreds of Jewish marriages and thousands of Jewish relationships.

David Yarus, 30, and his three co-founders, working night and day in a gritty warehouse in the Williamsburg section of Brooklyn, launched JSwipe during Passover 2014 to capitalize on the extra downtime people had while home for the holiday. It seems to have worked: Almost instantly, “people were screenshotting and uploading [to social media] and we were able to immediately scale across the Jewish world,” Yarus said.

According to JSwipe, as of September 30 the app boasts 800,000 users worldwide (about 5% of the global Jewish population), 100 million monthly swipes, 4 million monthly messages and 1 million monthly matches. Yarus speaks with excitement about the couples, marriages and even babies that his brainchild has brought about. He attributes the app’s remarkable growth primarily to being in the right place at the right time, but also to the app’s execution: “Millennials need the freshest, cleanest, smoothest technology and user interface; at that point it wasn’t available for millennial Jews. We brought the latest and greatest of technology and innovation to the Jewish community, and we did it in a fun, fast, friendly, clean way. Social media is really where it just blew up.”

Though JSwipe has been wildly successful, not all has been smooth sailing. In late 2014, the parent company of JSwipe, JDate, Spark Networks, sued JSwipe, claiming intellectual property infringement over JSwipe’s use of the letter “J” and its matching algorithm. After a very public back and forth, the controversial lawsuit ended with the acquisition of JSwipe by JDate. “If you’re getting sued you’re having quite an impact, so it was a bittersweet moment,” noted one of Yarus’s co-founders, Chad Wood. The team got through it by really understanding that both companies were trying to do the same thing and that at the end of the day, it’s just the nature of the way some things work out. “Startups disrupt, and when you disrupt, there are certain players that are behind or who are wanting to catch up,” Wood said.

Yarus concurred: “Gam zeh le tov — what happened was crazy, but it’s all for the best.” It took some long and hard thinking; it made the founders question their intentions and what, exactly, they were trying to do. But ultimately, they were trying to impact the Jewish community, and so they made the choice of “tough love” required to mend fences with those suing them.

JSwipe, now officially part of Spark Networks, has come a long way from its scrappy Williamsburg beginnings (the old office came with the perks of a makeshift mini-golf hole and a closet shower). But according to Wood, even after the merger the organization is “still very much a startup. We’re just a startup within a larger organization, so frankly it really hasn’t changed much. The excitement and the energy is 100% still there… at this point you’re just working with more people, more resources and more flexibility.” After its acquisition the JSwipe team is able to focus fully on the “product, experience, and the community.”

While prior to the merger Yarus called JDate an “outdated organization” with “an outdated business model,” he and his team seem to have fully embraced the challenge of bringing it up to speed: in addition to focusing on JSwipe, Yarus noted that the team is “very deeply involved in the broader organization; I think we drive a lot of creativity.”

Every now and then you have one of those days that are like, extra inspiring and awesome. This was one of them… Mid-Jerusalem blizzard and FREEZING – everything just felt right. #blessed #thankful #inspired

Though it would be easy to allow his work with JSwipe to become all-consuming, Yarus isn’t just busy making matches. While best known for the dating app, his driving mission is building the future of the Jewish community.

For over a decade, Yarus has been identifying weak points within the Jewish world and creating innovative solutions to fix them. Chief among these challenges today, he observes, is the growing disconnect between millennial Jews and the leaders of the Jewish community.

“It shocks me that there isn’t more of a dialogue,” Yarus said. “There’s a coming rift in the Jewish world — the division between Boomers and Generation X, the decision makers and funders and chairpeople of ‘Big Jewish’; there’s a fundamental lack of understanding and clarity regarding millennials in general and how we relate to our Jewish identity. The priorities are set by older generations — and they’re freaking out.” We’re not going to synagogue, we aren’t connecting to our Judaism in the same ways earlier generations did. Older generations are “lovely people who don’t have a true understanding of what drives, moves, connects millennials to themselves and to their Judaism. There’s no surprise to me that we are seeing this drop-off and growing disconnect.”

Millennial Jews are some of the least religiously observant and Jewishly engaged members of the tribe in recent history: Almost a third of those born after 1980 identify as having no religion, and among Jews of all ages who fall into this category, 79% have a spouse who isn’t Jewish.

While communal leaders tear out their hair in frustration and opine about this growing divide, Yarus has delivered a solution: JSwipe makes dating other Jews as easy as swiping right.

In a March interview, Yarus cited the book “Contagious: Why Things Catch On” (written by fellow Jewish business guru Jonah Berger) as a source of inspiration for his team’s product design and marketing strategy. In this book, Berger explains how six traits — social currency, triggers, emotion, public, practical value and stories — can ensure an idea or product’s virality. JSwipe took off in part because it tells a compelling, shareable, emotional story of oft-discussed public and practical value: It has the potential to bring Jews together in the most important relationship of their lives. But JSwipe also works because, as Berger says, the product itself matters, and JSwipe is a stellar product with great user experience.

I want to live in a world where our default state is love, where we celebrate difference, and where everyone shines so bright that our collective light is the primary cause of global warming. To create this world I will push myself to actualize all potential within and around me, inspire everyone I meet to pursue their truth, and devote my life to cultivating collective consciousness. So incredibly inspired watching @heyamberrae transform @theworldwewant from idea to global movement. Special thanks to @templemb for bringing #TheWorldWeWant to #TelAviv, where I saw people stop in their tracks to breathe in the energy, hope, and future this wall represents. ✨?✨ – What world do you want to live in? What will you do to create it?

JSwipe is far from the only community Yarus has helped build. He’s a member of Chevra Ahavas Yisroel, a dynamic Chabad congregation of thinkers and doers in Brooklyn’s Crown Heights, and has helped the organization through a number of communal challenges.

“Pull triggers. Have you ever heard him say that?” asked Yarus’s friend and fellow congregant of almost a decade, Refael Tessler. “You’ve got to just go for things sometimes. A vision is one thing, but then to bring it down into actuality is another, and sometimes you’ve got to just pull the trigger.”

From an early age, Yarus was an unabashed action taker. Without telling his parents, he applied to St. Albans, a private Christian preparatroy school in Washington DC. Attending the institution, he said, marked “the most interesting and intense two years of my life.” In Florida, where Yarus grew up, Jewish identity was measured by how Jewish one acted, to what degree one measured up to an arbitrary set of communal standards. At St. Albans, far from being surrounded by other Jews, Yarus was almost the sole representative of Judaism. “It shifted the way I thought about Jewish identity,” he said. Since then, his Jewish journey has been a whirlwind and his Jewish identity continues to evolve.

After a perspective-widening trip to Israel during his sophomore year of college, Yarus became an integral part of sustaining the Chabad community affiliated with Babson, his prestigious private business school in Wellesley, Massachusetts. As Babson Chabad’s Rabbi Moshe Bleich put it, he was “unstoppable, as a matter of fact. He was able to really make things happen in a very big way, not just for himself but because of his enthusiasm for all this, He helped create this group which is obviously still around and has grown a lot bigger since he’s been here.”

In addition to fighting the college for Babson Chabad’s recognition as an official university organization (and for the funding that comes with it), Yarus also took part in organizing humbler events, like challah braiding and menorah making. “He was a real leader, even when he was 18, 19,” Bleich said. “He was somewhat of an all-star on campus, actually. He was the president of the Student Government Association, so he was the student president on campus… he was very, very popular on campus. For us it was huge, having someone like David Yarus who is a go-getter, a get it done, no-nonsense type of person: He was able to really move mountains and make things happen.” 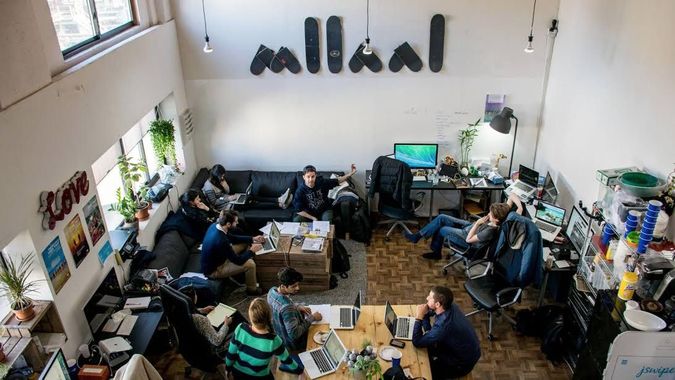 Aside from his involvement in the day-to-day operations of JSwipe, Yarus is also active in the millennial-oriented community “think tank” and “collective of #future-thinking lifehackers” he founded, mllnnl, through which he consults for a slew of major Jewish organizations: Hillel, Birthright, and the Charles and Lynn Schusterman Family Foundation, just to name a few. He’s into biking and into the Sabbath at Burning Man. If you glance at his Instagram, you’ll see he rocks a baseball cap just as often as he does a wide-brimmed felt hat. What’s next for Yarus?

“Part of my purpose in life is to stand on the top of the highest mountains I can stand on and scream, thoughtfully, to the leaders and connect the dots,” he said. He also wants to bring “digital everything” to the larger Jewish world. But at the end of the day, whatever Yarus has next up his sleeve, it will be a game-changer for the Jewish community. It will be something others wish they’d thought of first (and maybe they had, but failed to execute it). But mostly, it will be contagious.