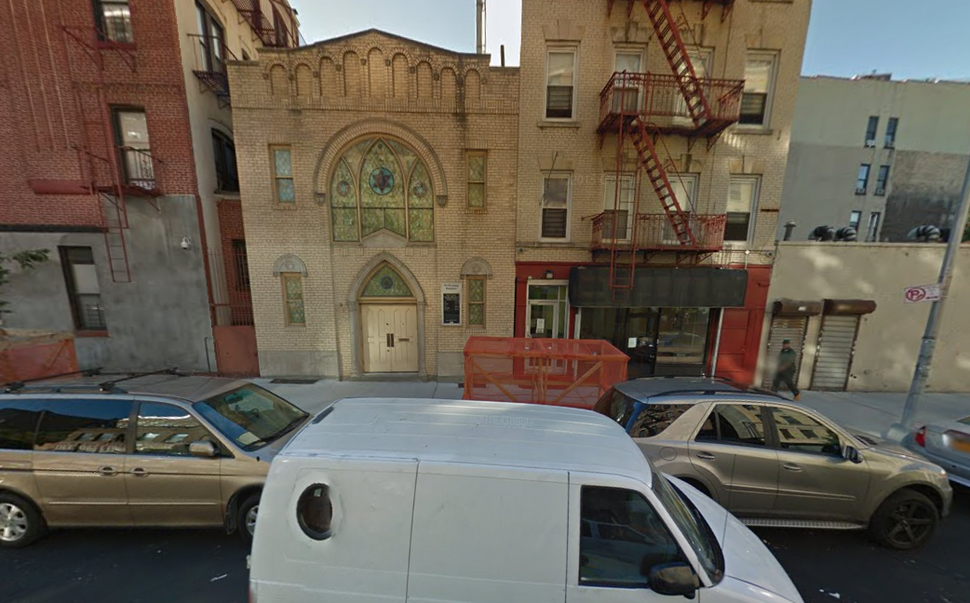 The Old Broadway Synagogue is the last operating shul in Harlem. Image by Google Earth

THE JEWS OF HARLEM: THE RISE, DECLINE, AND REVIVAL OF A JEWISH COMMUNITY

There was once an area in Manhattan where few Jews — and almost no whites — settled, that area beneath Morningside Heights, past Central Park, above 96th Street on the East Side: Harlem. But in the past two decades, with gentrification and “rent is too damn high” costs to boot, the boundaries have broken down, and Jews have started to flock to the predominantly black neighborhood. Jeffrey S. Gurock shows that such a move has rich, if forgotten precedents in “The Jews of Harlem: The Rise, Decline, and Revival of a Jewish Community.”

In a period that stretches from the late 19th to the mid 20th century, Harlem contained one of the largest Jewish communities in the United States, second only to the Lower East Side. Gurock, an urban studies professor at Yeshiva University and author of the prior volume “When Harlem Was Jewish,” starts his chronicle around 1870, beginning with Israel and Emma Stone, German Jews who moved there to enter the clothing business far off from the expense and competition of downtown. Their story became that of an inchoate German Jewish bourgeoisie, which built for itself elegant brownstones in Central Harlem and constructed tenement housing to the east for Harlem’s lower income new arrivals—Irish, Italians and Eastern European Jews. This class included luminaries of the New York Jewish scene, the future publisher of the New York Times, Arthur Hays Sulzberger, among them. 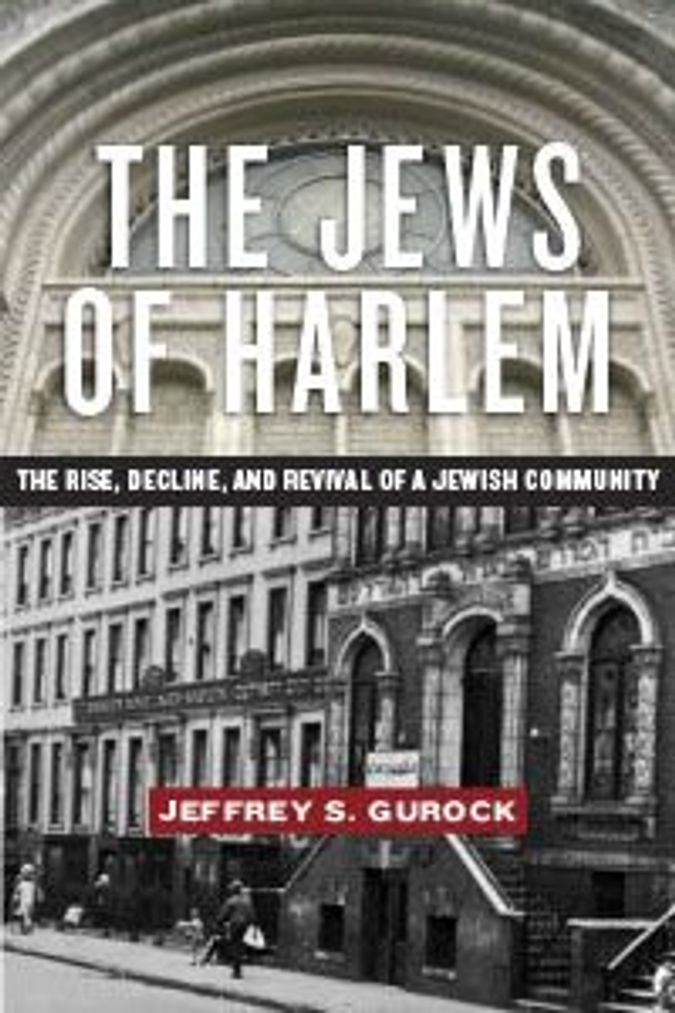 The community in an initially semi-rural Harlem grew in fits and starts, with the gradual opening of synagogues, community centers and Jewish schools. It had the feel of religious life on a frontier in its jury-rigged nature, Gurock argues. And at times, the absurdity reached “Blazing Saddles” proportions, minus the covered wagons and Indians. The local chapter of the Young Men’s Hebrew Association, for example, shortly upon its founding in 1879, organized a Hudson River cruise on Tish B’Av, the anniversary of the ancient temples’ destruction. This offended the piety of members at Congregation Hand in Hand, Harlem’s first (and erstwhile Orthodox) synagogue. But as Gurock notes, the summertime festivities sprung from mere ignorance, not from some commitment to Reform Judaism.

As Gurock unfolds his narrative, and as the Harlem Jews expand in number and diversity, familiar issues emerge: the classic tension between Germans and Eastern Europeans, fights over religious practice, anxieties about loss of cultural identity. But somehow the community held together. Harlem’s German Jews permitted monied Eastern Europeans into their ranks, and the two cooperated on initiatives like the Uptown Talmud Torah, a religious school that blocked full-on assimilation and Christian efforts at evangelism. At Temple Israel (the former Congregation Hand in Hand), the synagogue threatened to splinter over a ritual feud. But the eminent rabbis Kauffman Kohler and Meyer Jacobs stepped in, and schism was averted.

Entering the turn of the century — the period of the Bund and Arbeter Ring — Gurock shifts his focus to how the shtetl Jews of Harlem coordinated with their Lower East Side landsmen to lead union drives, battle greedy store owners and demand fair rents. He also delves into political history, with a highly detailed account of the battle among Democrats, Republicans and Socialists for a grip on the Congressional seats located on the Lower East Side and in Harlem.

During the Roaring Twenties, due to housing starts in the outer boroughs and improved public transit, Jews departed Harlem as blacks rushed in on the heels of the Great Migration. According to Gurock, the transfer of the neighborhood from one ethnic group to another was a mostly peaceful series of events, which seems quaint in light of the racial hatred that would later consume the city. As the Jews exited the neighborhood — for the Bronx, for Queens, for Long Island — their synagogues and communal institutions followed them to those new climes.

Despite its many successes, “The Jews of Harlem” has a major shortcoming: it does not fully address Harlem’s black residents, devoting a mere 70 pages to the group most associated with that neighborhood and with whom Jews have maintained a collaborative and conflictual relationship.

Gurock does well in what he does cover: the tensions that flared as wealthier Jews held economic power in a black Harlem, a complicated tradition of minstrelsy evinced in the work of performers such as talkie star and area habitué Al Jolson, the open race war between blacks and Jews that erupted as the ‘60’s came to an end, with the Ocean Hill-Brownsville showdown for control of New York City public schools.

But he understates the hostilities between these two communities, by clinging to the idea that antipathy to Jews must be plainly stated in the written record in order to have existed at a given point. Discussing the riots that shook the neighborhood and menaced Jewish businesses in 1935 and 1943, Gurock cites reports in the Amsterdam News, a black publication, and a statement from the Anti-Defamation League to support his thesis that “anti-Semitic sentiments did not fuel the core frustrations that sparked the violence.” Neither were the disturbances of 1964 “a battle of blacks against Jews,” but instead a clash among blacks and whites framed in economic terms. 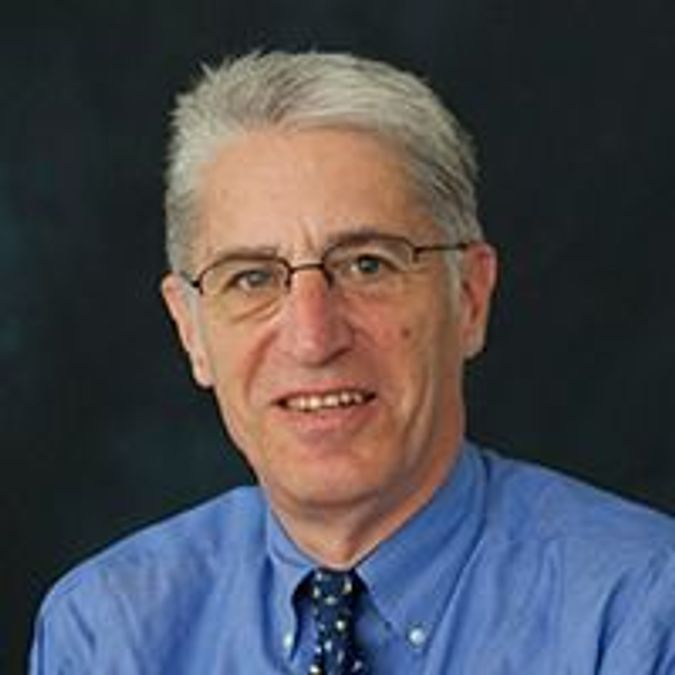 But if black intellectuals and community leaders from the ‘30’s on felt rage against the Jews who operated businesses, donated to philanthropies, or lived in Harlem, they might have refrained from qualifying antagonists as Jewish out of politesse and practical need. Take the example of Kenneth Clark, the psychologist and school desegregation activist who operated a clinic in Harlem. In his 1965 opus “Dark Ghetto,” he described “the dilemmas of social power” at work on the block. By his lights, Harlem was “a philanthropic, economic, business, and industrial colony of New York City,” a status quo that “white liberals” were implicated in by dint of their own charitable activities, which offered monetary aid but also articulated hierarchy.

As Mitchell Duneier writes in his recent “Ghetto: The Invention of a Place, the History of an Idea,” Clark himself had a run in with one of those sort: Marion Rosenwald Ascoli, a do-gooder and Sears heiress who had been the main funder of his clinic, until she withdrew her money after an attempt to exert more control over the practice. She was Jewish. And so, too, were many of those “white liberals.” As Duneier opines, expressions of ambivalence toward people not specified as Jewish might have been the result of unequal power, rather than an absence of that feeling.

Arriving at the present day, Gurock ends his chronicle largely on a note of triumph, while acknowledging the pain of those whom gentrification has displaced. In a chapter titled “The Beginning of Return,” he describes the families on the make—similar to Israel and Emma Stone—today finding a home in a renascent Harlem: “Harlem is now, as it was a century ago, a very good place for Jews. It remains to be seen whether uptown will witness a second heyday for Judaism.” There is reason for hope on that count—a Jewish Community Center will open on West 118th Street next January. But as gentrification brings into Harlem the descendants of those whom the suburbs brought out, old disparities—and their attendant hatreds—could manifest again.