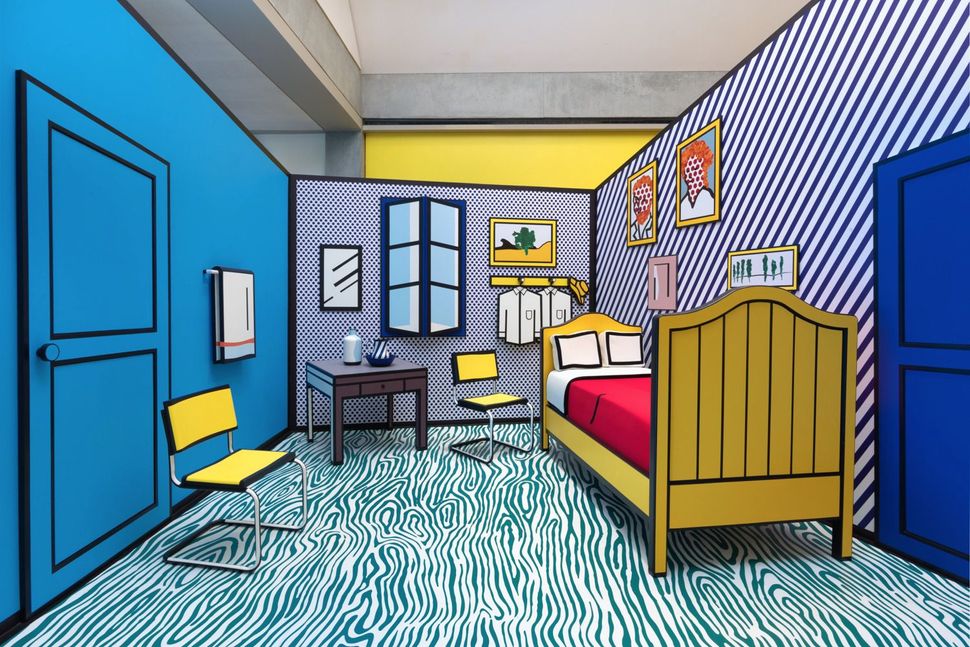 Though he was the grandson of German-Jewish immigrants. Roy Lichtenstein played down his roots.

But as a new exhibition at the Skirball Cultural Center in Los Angeles suggests, Lichtenstein’s Jewishness shaped the pop art pioneer’s career from his first experiments until the end of his life in 1997.

“Lichtenstein’s story, in many ways, is an assimilation story,” said Bethany Montagano, curator of “Pop for the People: Roy Lichtenstein in LA.” “Lichtenstein didn’t speak often about being Jewish. There was just one interview in the 1960s where he spoke about his maternal grandfather who went to temple and spoke Hebrew. But the press wasn’t that interested in pigeonholing him with identity. They were much more interested in how disruptive his art was.”

Much of the exhibition spotlights the artist’s relationship with Gemini GEL, a Los Angeles print workshop — owned by a pair of Jews — whose pathbreaking collaborations built a bridge between fine art and the mass market. Now in its 50th year, Gemini GEL itself is the subject of a concurrent show at the LA County Museum of Art. Gallerist Leo Castelli was the one who nudged Lichtenstein towards the Gemini collaboration.

“Not everything these artists did or accomplished was altruistic,” Montagano said. “They were also smart businesspeople. Castelli realized his cohort of artists could only make so many paintings each year. He pushed them to get into printmaking. Gemini was the best, and they were willing to provide an open and experimental canvas. Printmaking has a lot to do with creating new art market. It was monetarily based, but also more accessible.”

Lichtenstein’s sense that he was an outsider led him to continuously push past boundaries, Montagano said. “Look at his early life. He grew up on the Upper West Side of Manhattan. Because he was Jewish, he could only live in certain apartment buildings. He couldn’t find housing at Ohio State, so he joined a Jewish fraternity, and spent a lot of time socializing with Jewish boys and girls. I don’t think it’s too much of a stretch to say it did impact his worldview — wanting to come from margins, from outside, and level the playing field.”

“That’s where he derived his inspiration,” Montagano said. “I’m not sure he would have pivoted to comic book art and advertising if not for those encounters.”

Ultimately, Montagano said, “Pop for the People” is about Lichtenstein’s “relevant, simple belief that there’s much more in the human experience that connects rather than divides us. Elevating common sources to fine art — comic books, childrens books, advertising, things from America’s living rooms – was unheard of at the time. At the same time, he reinterpreted the work of artists like Van Gogh and Dali. He leveled the playing field between Jewish-American comics artists and Picasso. And his identity and upbringing gave him the resourcefulness, worldview, and passion to break down barriers.”

The Forward’s Dan Friedman will be hosting a panel on “Islamophobia and Anti-Semitism in Election Year” at the Skirball Cultural Center on October 19. Entry is free.