How To Vote in Other Languages — Including Yiddish 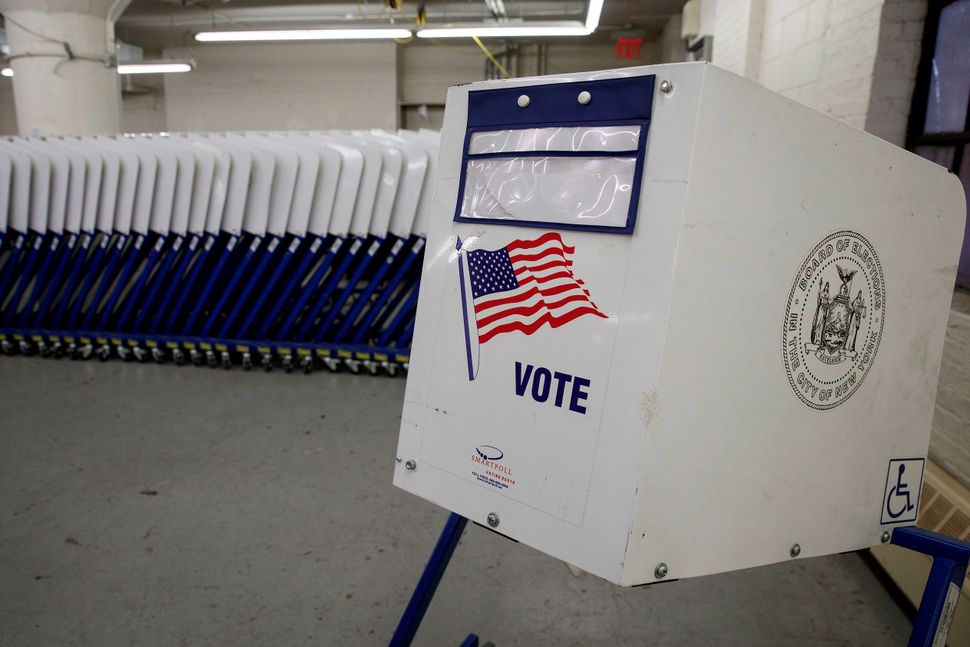 Voting early in Chicago, where the lines were long and snaking around the Edgewater Library stacks, I received a receipt printed in four languages — English, Spanish, Hindi, and Vietnamese. I immediately wondered about languages not listed but certainly heard in this zip code, one of the most diverse in America, and home to refugees from the former Yugoslavia, Africa, and the Middle East. What happens if you can only read Arabic or Swahili? What are your rights?

The answer came right in front of me, as a seventy-something couple approached election workers and asked for permission to let him help her vote. The election staff agreed after they both showed identification and he stated “I’m her husband.” Federal law gives you the right to bring another person to help you vote if you are unable to read or write, and in this case, the woman in a bun, tightly clasping her purse with one hand and holding her husband’s arm with the other, only read Russian, not English. That’s when I realized that there were no Russian voting materials at the library.

The right to vote in another language is protected under the Voting Rights Act of 1965, which was expanded in 1975 to include the right to vote in another language, and most recently amended in 2011. But if you read the fine print on the Justice Department’s website, detailing the Language Minority Provisions of the Voting Rights Act and its purpose — to enforce the 14th and 15th Amendments of the Constitution — it’s a little more complicated than that.

“Covered language minorities are limited to American Indians, Asian Americans, Alaskan Natives, and Spanish-heritage citizens—the groups that Congress found to have faced barriers in the political process,” per the Justice Department’s website. Refugees from the former Yugoslavia, or Africans, both well-represented in my neighborhood, or for that matter, Russians, like the couple I saw, are not on that “covered language minority” list; neither are Middle Eastern refugees, currently the major refugee story since World War II.

Beyond that, to have your language represented, you need to live in the same neighborhood as other speakers of your language. Specifically, you must live in an area where “more than 5 percent of its voting age citizens are members of a single language minority group and are limited-English proficient,” according to the Justice Department’s website. In addition to that, “the illiteracy rate of such language minority citizens in the political subdivision is higher than the national illiteracy rate.”

Sometimes sheer numbers will help when percentages won’t. There is the “numerical approach” for a political subdivision, meaning “more than 10,000 of its voting age citizens are members of a single language minority group and are limited-English proficient;” and “the illiteracy rate of such language minority citizens in the political subdivision is higher than the national illiteracy rate.”

The Civil Rights division of the Justice Department publishes a brochure on voting rights in six languages: Spanish, Chinese, Japanese, Korean, Vietnamese, and Tagalog. I kept thinking about languages that are left out. My immediate neighbors speak Croatian, Russian, and Turkish — languages without brochures; but all also speak some English, and can probably make it through the ballot.

Sometimes politicians lobby to make voting materials in a particular language available in their districts; Assemblyman Dov Hikind, for instance, a Brooklyn Democrat, lobbied for Yiddish. In practice, it will likely be easier to vote in Yiddish in Brooklyn as opposed to Alaska.

The Justice Department’s site states that it also holds meetings in various jurisdictions, and makes sure there are sufficient bilingual officials available at the polls. And if all else fails, the Justice Department can sue. “The Division, when necessary, has filed litigation to enforce the language minority requirements,” it says.

In a close election year like this one, with many concerned about limited polling places and long lines, protecting the ability to vote in languages other than English may be especially important. It’s yet another aspect of the election to watch.

For more information on The Language Minority Provisions of the Voting Rights Act, click here.

Aviya Kushner writes the Forward’s “World of Words” column. She is the author of “The Grammar of God.”

How To Vote in Other Languages — Including Yiddish