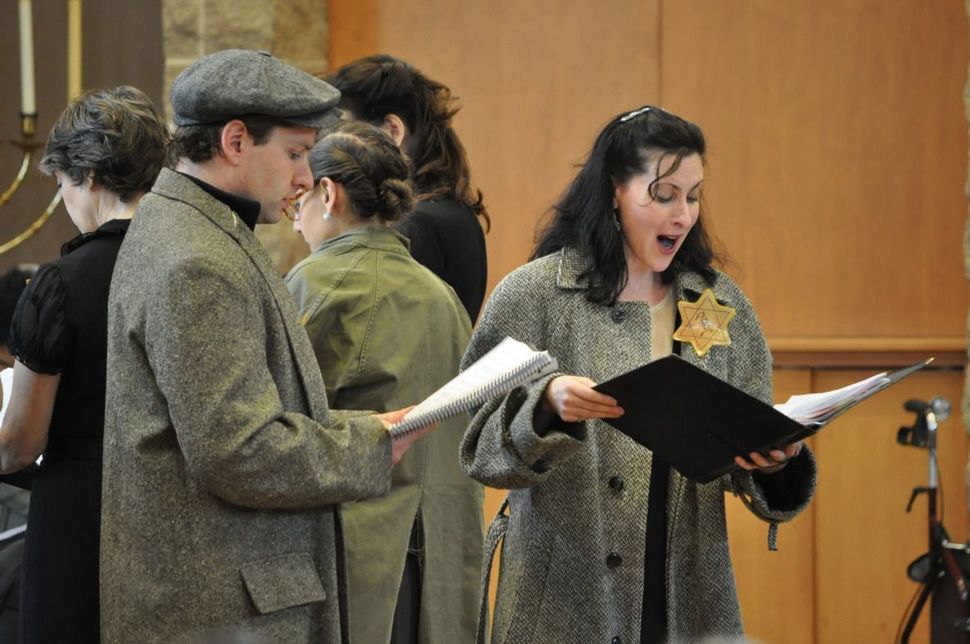 Image by Courtesy of Shaarei Tikvah

In January, 2018 a new opera with an unusual angle on the Holocaust will make its world premiere at Opera Colorado.

The Denver-based opera company, which recently announced its 2017-2018 season, will perform composer Gerald Cohen and librettist Deborah Brevoort’s “Steal a Pencil For Me,” which tells the story of Jaap and Ina Polak, who fell in love while in the Westerbork transportation camp and Bergen Belsen concentration camp.

Cohen, a cantor at Shaarei Tikvah in Scarsdale, met the Polaks there in 1987. (They were longtime congregants.) Speaking with the Forward over the phone, he explained he had the idea to write an opera about the duo after reading a book of the letters they wrote each other while in Westerbork and watching a 2008 documentary on their story.

He’d already written the full-length opera “Sarah and Hagar” and the one-act opera “Seed” and was looking for his next project. As a first generation American born to parents who’d fled Europe, he’d hoped to write an opera focused on the Holocaust. Learning the Polaks’ story crystallized his interest.

“One thing that Deborah and I were aiming for was an opera that was both about an intimate story, about very real people, and putting it in the context of this huge horrible historic event,” he said.

“I called up Jaap and Ina and said I’m thinking of writing an opera on your story, and they were kind of stunned. Jaap’s first reaction was ‘write it quickly,’ because he was 97 years old at the time,” he continued.

The Polaks assisted Cohen and Brevoort with the opera’s creation, and both were able to see its first performance, a semi-staged concert production at Shaarei Tikvah in 2013, before passing away. Conducting that performance was Ari Pelto, who has since become the music director of Opera Colorado.

“I was completely wrapped up in it,” Pelto told the Forward. “[Cohen’s] musical writing, his musical language, the compelling story itself, made me deeply interested in the piece.”

When he joined Opera Colorado, in a happy coincidence, the company was beginning a push to produce more new work. They were also beginning to think about performing operas in venues outside the Ellie Caulkins Opera House, where they usually perform. For Cohen, those projects rang a bell.

“I thought that ‘Steal a Pencil For Me’ would be perfect,” he said, “partially because I thought it could be interesting to engage in the demographic of the Jewish community.” In line with that engagement, the opera will be performed at the Elaine Wolf Theater at Denver’s Robert E. Loup Jewish Community Center.

“[Cohen’s] music is intricate, it’s very sophisticated, it’s very approachable but deceptively simple,” Pelto said. A year from January, the Denver community – Jewish and otherwise – sounds like it’s in for a treat.

Watch a scene from the opera below.