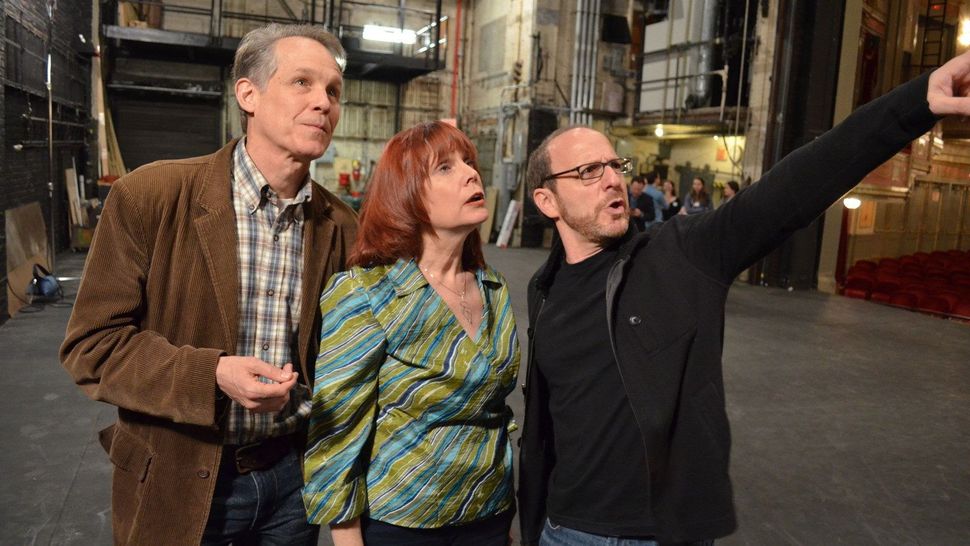 Image by Best Worst Thing That Ever Could Have Happened

Editor’s Note: “The Best Worst Thing That Ever Could Have Happened,” a documentary that chronicles the rise and fall of the beloved-but-doomed Stephen Sondheim-Harold Prince musical “Merrily We Roll Along,” opens this weekend. Forward contributor Abigail Pogrebin was in the original cast along with Lonny Price, who also directed the new documentary. The following reminiscence is taken from her Amazon Kindle single “Showstopper.”

I have on my wall a large black-and-white photograph of the legendary Broadway composer Stephen Sondheim and the famed director Harold Prince, from the fall of 1981.

They’re mid-conversation in a rehearsal studio; a lean, young Sondheim is dressed in a sweatshirt with three stripes on the sleeve, sheet music in his left hand, appearing to listen intently. Prince is clearly saying something about the show they’re rehearsing, the stub of a cigarette between two fingers, his trademark dark-rimmed glasses perched, with inexplicable balance, on his high, bald forehead.

The men appear focused and also intimate — friends and collaborators since 1970, with a track record that includes, at the time of this photograph, several Sondheim classics: “Company,” “Follies,” “A Little Night Music,” “Pacific Overtures,” “Side by Side by Sondheim” and “Sweeney Todd.” I bought this image after coming upon it in an art gallery a few years ago. My response to it was immediate, because I remembered clearly the day it was taken. I was at that very rehearsal, and so many others, as one of the twenty-eight cast members in Sondheim’s most infamous, anomalous flop: “Merrily We Roll Along,” a show that closed after just sixteen performances but went on to become a cult favorite.

“Merrily” is the story of three close friends — Franklin Shepard (a composer), Charles Kringas (his lyricist), and Mary Flynn (a novelist/journalist) — and how their devoted troika splinters over time, thanks to compromises and betrayals. The narrative winds backwards chronologically, opening with a tense party scene in the Reagan era and ending with the sweet launch of their friendship (and Sputnik) in 1957. It was conceived originally to have teenagers playing adults at various ages, over two decades, as the timeline rewound.

I treasure the snapshot not just because it captures two giants whom I’d idolized shuttered abruptly, they wouldn’t work together again for twenty-two years, and even when they finally did, not with the same fanfare and mythology around them. I value the picture also because it reminds me of how seemingly perfect moments inevitably fray and dim.

I’m a journalist now; I don’t wear my “Merrily” credit on my sleeve and, most of the time, I don’t think to mention it to anyone —unless I’m talking to an obvious Sondheim junkie — because it was so long ago, and because I have spent my adult life as theatergoer, not a performer. That piece of the past feels very much like it’s passed. But recent events have brought it all back — the magnitude of the experience, the profuse fondness of our cast, the shock of the smashup, and especially the saliency of the show’s material. Its story and lyrics were about aiming boldly, getting shot down, success, settling, and ultimately losing track of what really matters. The themes didn’t really resonate when I was in the show: At sixteen, I’d yet to become jaded or thwarted by severe disappointment. “Merrily’s” failure was the first time, really, that I saw a “sure thing” stumble.

But then, of course, growing up has a way of introducing all the lessons that “Merrily” portended. Despite all the blessings in my life — more than I can name without feeling superstitious—by now I’ve seen my share of letdowns: collapsed friendships, over-dramatic breakups, the shoals of parenting, goals thwarted or never tried.

What else brought “Merrily” back to me in the last year? The myriad birthday celebrations and retrospectives for Sondheim’s eightieth in 2010. The publication of Sondheim’s “Finishing the Hat,” the first of two rich volumes in which the maestro deconstructs every one of his musicals. I suddenly had a window into where he felt “Merrily” had gone wrong, and I was moved to read how strongly the experience had impacted Sondheim himself. It prompted me, after three decades of dormancy, to reflect on what I myself took away.

The most powerful time-travel moment came in March, 2011, when I was asked by Lonny Price, one of the original leads of “Merrily” —now an accomplished theater director—to be interviewed by him for a documentary he is co-producing on the making of “Merrily.” As I began answering his questions about whether the show had informed my approach to life, I was startled to hear myself admit how much it had. The experience taught me that creativity takes audacity, that Utopia materializes, that failure can be survived. It was formative to see that songs — which underwhelmed some critics in 1981 — could become classics ten or twenty years later; that a bedeviled flop could become folklore, that art can keep breathing after it’s declared dead, and even come to life again, many times over.

No one in Merrily has ever put the whole story to paper, but every one of us was imprinted by it. The plotline came to life before our eyes — not the selling-out so much as the dissolution of relationships and, in any pursuit, the certainty of at last one big fumble. Those of us who watched our heroes build “Merrily” — and then attempt to save it—were galvanized and startled by their struggle. I’m now actually aware of how pivotal this roller coaster was in my overall perspective, a definitive lesson — in ways both valuable and invisible to a teenager — in how things can not go your way.

Lonny arrived at my Upper West Side apartment earlier this year with a much bigger film crew than I anticipated. After a long setup (during which I kept returning to my bathroom mirror to mask the laugh lines in my face with more makeup), we faced each other under hot lights and talked for an hour about “Merrily We Roll Along.” Here I was, at forty-five, utterly distanced from those teenage years — that pre-real-life moment before I’d ever had heartbreak, sex, or a job — sitting together nearly three, experience-filled decades later, in my own bona fide home with photographs and appliances, my children doing homework in the next room, my husband at the office, two published nonfiction books on my shelf plus various stops along the résumé. Other than our original cast being connected on Facebook (and we are — through supportive updates and excavated snapshots), “Merrily” was a lifetime away.

But Lonny brought it all back: the first reading, the last audition, the first rehearsal, opening night, closing night, the album recording, the reunion.

He asked how the experience had changed me and, at first, I wasn’t sure it had.

Then I realized how much.

It was my first proof that dreams can get realized overnight…and be dashed just as fast. It was the dividing day between believing idols are infallible…and learning that everyone fails.

It was a taste of the thrill of professional theater…and a reminder that maybe my skin wasn’t thick enough. But above all, it was the moment in my life when I felt airborne. When everything up ahead was bright, and possible.

“In truth,” Sondheim writes about “Merrily,” “like the characters in the show, I was trying to roll myself back to my exuberant, early days, to recapture the combination of sophistication and realism that I’d shared with Hal Prince, Mary Rodgers, Jerry Bock, and Sheldon Harnick, John Kander, and Fred Ebb, and the rest of us show-business supplicants, all stripped back to our innocence”

This article is excerpted from “Showstopper” by Abigail Pogrebin, an Amazon Kindle Single.