J.K. Rowling’s Jewish Wizard, Bernie Sanders’s Manifesto, And 8 Other Things To Read, Watch, And Do This Weekend 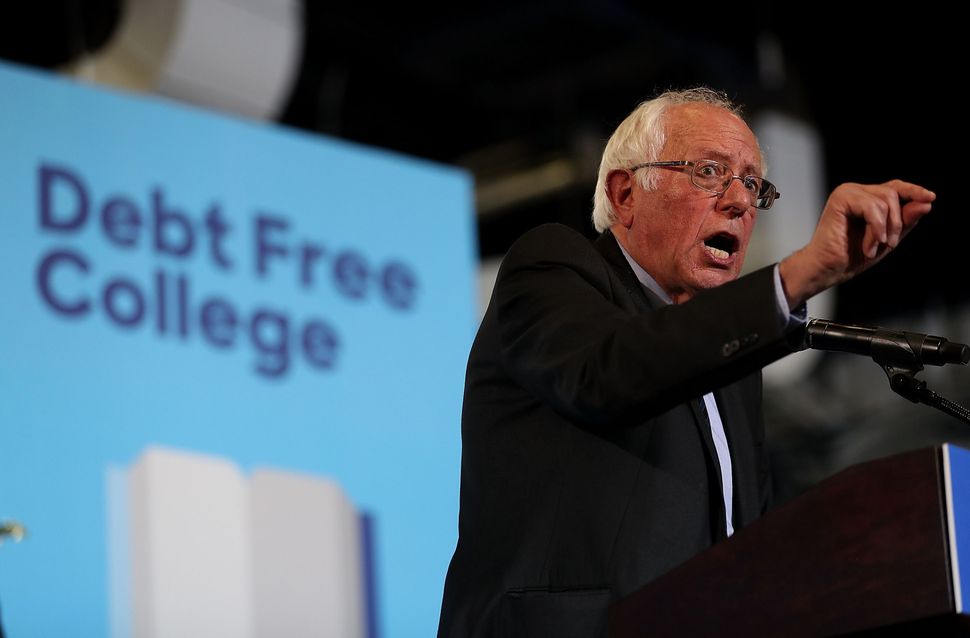 It can be hard to remember to take time for yourself, in this week between the madness of the election and that of Thanksgiving. Still, take some time this week for the arts. With good reads, a few good movies, and events in New York, D.C., Chicago and Los Angeles, there are plenty of options to keep you interested.

The new documentary “Best Worst Thing That Ever Could Have Happened” opens in New York this weekend (and Los Angeles the following one). The documentary tells the story of Sondheim’s “Merrily We Roll Along,” the original run of which lasted only 16 performances; made by one of the original cast members, Lonny Price, it’s a tender look at a musical that’s since become legendary. While you wait to see it, read Abigail Pogrebin’s recent essay in the Forward about her experience as a member of the show’s original cast.

2) Read about the remarkable rise of women artists

Famously, in 1971 the art historian Linda Nochlin penned an essay interrogating the lack of great women artists. In a feature for The Atlantic, Sarah Boxer revisits the subject 45 years later. Reviewing a year of exhibits focused on women artists like Barbara Kruger and Diane Arbus – “this year, 2016, is once again the year of the woman artist – it happens roughly every decade,” she writes – she revisits the question of the unique ways in which women move in the art world.

Check out an exhibit on the former in Washington, D.C. and the latter in New York. An exhibit of Kruger’s art opened in late September at D.C.’s National Gallery of Art, and will run through mid-January; an exhibit of Arbus’ work, which opened at New York’s Met Breuer in July, will close on November 27th. While you’re on the Jewish-women-artists bent, stop by Annie Leibovitz’s “WOMEN: New Portraits” at Manhattan’s former Bayview Correctional Facility, open until December 11th.

Sanders and Chernow made waves this year for very different reasons – Sanders as political firebrand, Chernow as the historian whose work inspired “Hamilton” – and this week release very different books. Sanders’ manifesto published November 15th, outlines his ideas for continuing the movement he began in his presidential campaign. Chernow’s “The Warburgs,” re-released two decades after its original appearance, relates the story of a patrician German and German-American Jewish family in the twentieth century. Their path through the twentieth century mirrored that of German Jewry more broadly, and provides useful looking back for Jews in what are still the early days of the twenty-first century.

5) Plunge back into J.K. Rowling’s wizarding world – this time with a Jewish protagonist

The first installment of the five-film series “Fantastic Beasts and Where to Find Them,” the first big-screen return to the world of “Harry Potter” in five years, features Porpentina Goldstein, played by Katherine Waterson. She and her sister Queenie take center stage alongside Eddie Redmayne’s Newt Scamander; as relations of Anthony Goldstein, an exceedingly minor character in “Harry Potter,” they’re the first major Jewish wizarding family Rowling’s created. Catch the movie when it comes out Friday to find out.

6) Check out talks with Sarah Ruhl, Edward Hirsch, and more

New York has a strong roster of talks and lectures this weekend, starting with Thursday, when Sarah Ruhl will join fellow playwright Lynn Nottage and actress Cynthia Nixon in conversation at the Brooklyn Historical Society, and Leonard Barkan his new book “Berlin for Jews” at the 92nd Street Y. Following those conversations, on Sunday the poet Edward Hirsch will appear with his friend and fellow writer Alec Wilkinson at the Museum at Eldridge Street to discuss his book-length poem “Gabriel,” written at Wilkinson’s urging to process his son’s death.

7) Hear the Ariel Quartet take on Mozart, Shostakovich, and Beethoven

The Ariel Quartet, formed by students in Israel almost two decades ago and now serving as the Faculty Quartet-in-Residence at the University of Cincinnati’s College-Conservatory of Music, performs at D.C.’s Kreeger Museum this Saturday. The program includes Beethoven’s Quartet in C-sharp minor, Op. 131; watch the group perform an excerpt from the piece below.

Sunday, in Chicago, Borts will perform a program rooted in the traditions of Yiddish theater at Chicago’s Illinois Holocaust Museum and Education Center in the Chicago YIVO Society’s Sarah Lazarus Memorial Concert. Borts most recently appeared on Broadway in “Once,” and Yiddish material is familiar to her; check out her performance of “Dem Zeydn’s Nign,” below.

As part of a stand-up comedy showcase at Los Angeles’s American Jewish University, watch professor and comic Dobrer deliver some serious shtick this Sunday. Dobrer, who also teaches at the university, will perform a set followed by a conversation with fellow comic Annie Korzen.

J.K. Rowling’s Jewish Wizard, Bernie Sanders’s Manifesto, And 8 Other Things To Read, Watch, And Do This Weekend