What If Mike Pence Got Booed at ‘Fiddler on the Roof?’ 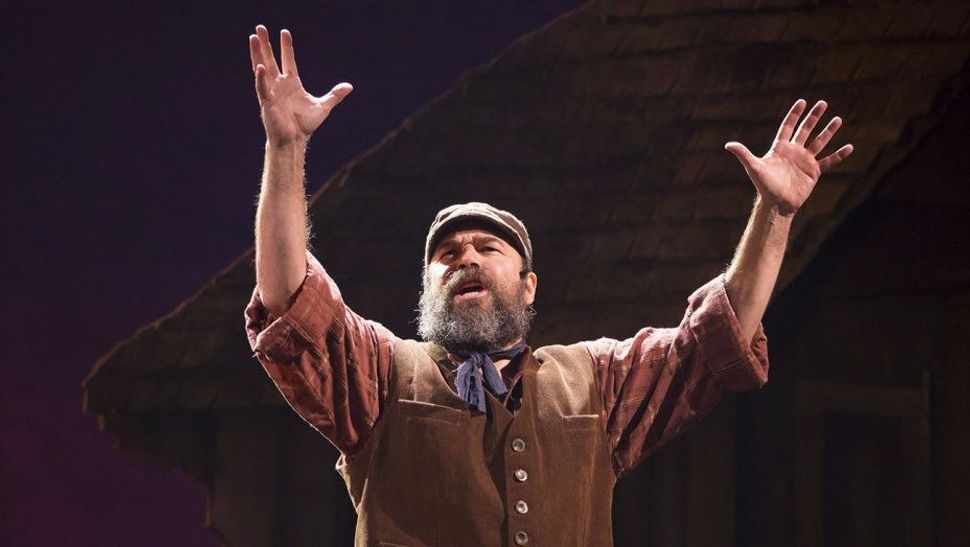 Picture this: It’s a lovely evening at the Broadway Theater and “Fiddler on the Roof” is nearing its finale. Soon, the little village of Anatevka — beset by pogroms and the disruption of tradition — will be little more than a memory. Some will try to adhere to the old ways, others will try their luck with America and assimilation.

The lights go down, then come back up. Applause clatters through the theater, then Danny Burstein, the actor playing Tevye, steps forward and tells the audience that Vice President-elect Mike Pence is in the house. Burstein silences the boos, then reads from a prepared statement:

“We, sir, we are the diverse America, who are alarmed and anxious that your new administration will not protect us, our planet, our children, our parents or defend us and uphold our inalienable rights, sir,” Burstein says. “But we truly hope that this show has inspired you to uphold our American values and to work on behalf of all of us.”

What would the reaction have been?

Would the president-elect have immediately taken to Twitter to call “Fiddler” overrated and to demand an apology from the actors playing Anatevka villagers?

Would “Sopranos” actor and E-Street band member Steve Van Zandt have gone on Twitter to censure the “Fiddler” cast for violating the sanctity of the relationship between audience and art and demand they apologize to Pence?

Would NeverTrumper Bill Kristol have mocked the “Fiddler” cast’s “lefty self-righteousness and self-importance?”

I think the answer to all those questions is No, no no, and probably no. For one thing, “Fiddler” is part of the American canon, a full-body embrace of assimilation and the American Dream. For another, it no longer represents (if it ever did) any challenge to complacency or any traditional reading of American history.

What makes “Hamilton” such a convenient target is that it has the efftrontery to present unapologetically a vision of a wholly diverse America. It’s an America where founding fathers engage in rap battles, and employ the sort of language that the president uses in the locker room but finds filthy when others use it, particularly those who come from different backgrounds and have different visions of America than he does. “Hamilton” represents what America truly looks and sounds like today — and, to some who’d like to turn back the clock to, say, 1964 when “Fiddler on the Roof” opened on Broadway, that’s a challenge. And, for them, that challenge needs to be headed off at the pass — with angry, self-righteous tweets and demands for apologies. And worse. Far worse.

Still, it’s interesting to think what might have happened if the same scene had played out at “Fiddler?” What if the president-elect had berated the cast and audience of the show for perceived harassment? What if there really was a #BoycottFiddler movement? What if Breitbart News declared the “Fiddler” cast to be “whiny Jews?”

A new sense of fear would right now be coursing specifically through the Jewish community, the same way it is coursing through African-American, immigrant and LGBTQ communities; it would be the same fear that is both chilling and galvanizing artistic communities throughout the country as we see grim portents arising from a president-elect who demands safe spaces for himself and his followers and none for anyone else.

Maybe an uproar over “Fiddler” never would have happened, but maybe we should act as if it had.

Maybe it’s time for every show’s cast to speak directly to its audience — whether or not Mike Pence is there, whether or not some businessman-turned-authoritarian politician tweets about it. Maybe it’s time to treat an attack against one work of art as an attack of all works of art. And, at the same time, maybe it’s time for artists and those who write about them to make sure we’re not only talking about tweets while we avoid talking about more momentous issues, such as cabinet appointments and $25 million lawsuit settlements.

The world should be a safe space and the theater should be the one where our safety and sense of complacency are challenged — not the other way around.

What If Mike Pence Got Booed at ‘Fiddler on the Roof?’