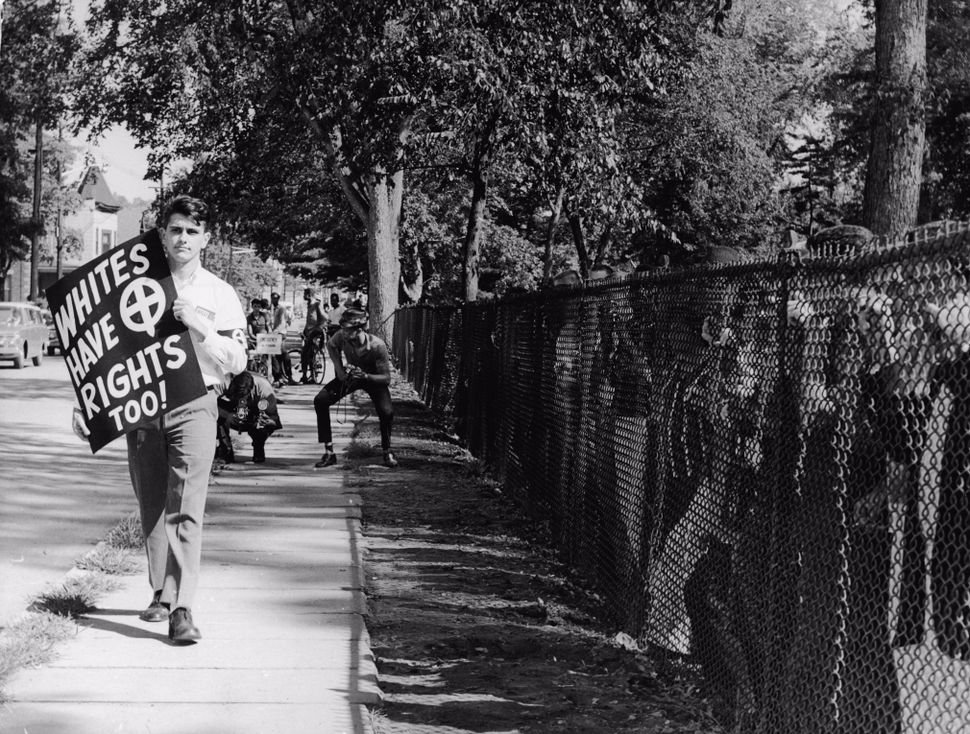 Hundreds of college students gathered outside the auditorium carrying signs protesting the evening’s speaker. Dozens inside were poised to heckle him and condemn his views. Many fumed that their university had extended an invitation to a veritable Nazi.

The scene could easily describe any number of recent campus protests where students have used inflated rhetoric to oppose the arrival of a controversial speaker. But on this occasion, the angry students were not exaggerating. The speaker was an actual Nazi.

On November 30, 1966, Brown University hosted a public lecture by one of its most notorious alumni — the founder of the American Nazi Party, George Lincoln Rockwell (class of 1942). With the speech marking its 50th anniversary this month, it is worth reflecting on what the forgotten episode reveals about how standards of free speech have dramatically changed on college campuses in the last half century.

The controversy erupted in October of 1966 after the Brown Daily Herald reported that the university’s main student activities committee, the Faunce House Board of Governors, had invited the American Nazi Party leader to speak on the growing “white backlash” against the civil rights movement. The committee justified the invitation by saying the event would provide the liberal student body with a sense of political trends on the far right.

At the time, Rockwell had made national headlines for his extreme views on Jews, Blacks, Gays, and other minorities. Having founded the ANP in 1959, he had marched in front of President Dwight D. Eisenhower’s White House with a sign reading, “Save Ike from the Kikes,” attacked Martin Luther King Jr. as “Martin Luther Coon,” and ran for governor of Virginia on a racist platform that later came to be known as “White Power.” Before his assassination in 1967 by a disgruntled Nazi comrade, Rockwell epitomized the worst of right-wing political extremism. If ever a case could be made for denying someone a platform to spread hate, it was he.

Predictably, various Brown students and faculty fiercely opposed the invitation. Some argued that Rockwell was not a serious political figure, describing him as an “impotent force” and dismissing the invitation as a publicity stunt. As Professor I. J. Kapstein argued, many students would turn out to see a “two headed cobra” and would be better served by the appearance of a more formidable right-wing politician, such as Barry Goldwater or William F. Buckley. Kapstein further insisted that inviting Rockwell was an “insult” both to the campus and to the “6,000,000 who died at the command of Rockwell’s idol.” Soon thereafter, Brown’s President Ray Heffner added his voice to the critics, saying that a “deplorable lack of responsible judgment” lay behind the invitation. In response to these comments, the campus board withdrew the invitation three days later out of “respect for those who would be most offended” by Rockwell’s appearance.

This withdrawal, however, inevitably led angry counter-protests. The Providence Journal accused the university of restricting “academic freedom,” while some Brown faculty feared the emergence of a left-wing version of “neo-McCarthyism” imposing a new kind of “political censorship” on campus. Supporters of inviting Rockwell insisted that students had the “intellectual maturity” not to be swayed by his “repulsive” views. Building on this sentiment, an ad hoc student group, the “Open Mind” club, formed to extend a separate invitation to Rockwell, which he eventually accepted. Despite further protests from Brown’s Hillel Rabbi, petitions from undergraduates, and protests by Jewish Veterans groups, no further move was made to cancel the talk.

On November 30, 1966, Rockwell spoke in front of 900 people at Alumni Hall and delivered a fiery, if rambling, talk laced with antisemitic, racist, and homophobic invective. Most of it was devoted to presenting the “facts” about the role of “international Jews” in supporting “communism,” promoting “race mixing,” and destroying America’s social and cultural order through their control of the media. Rockwell further complained about being unable to “criticize Jews” without being “compared to an antisemite” and griped about being “subjected to terrorism” by “bums,” “beatniks,” and “queers.” The response of the audience was mixed. There was sporadic heckling, but also frequent laughter and clapping, especially when Rockwell cracked his jokes about his college days, made stridently racist claims, and facetiously promised to “go to work…for Martin Luther King” if any of his assertions were proven false. The talk’s content was blatantly offensive from start to finish. But it went off without major incident.

Contrast this outcome with the situation fifty years later. By all accounts, college campuses today are less willing to tolerate the expression of views that are objectively far less offensive than those articulated by Rockwell. In recent years, student groups have protested the appearance of a wide range of speakers. Some of these invited speakers are generally identified as conservatives, such as Ayaan Hirsi Ali (who was to be awarded an honorary degree by Brandeis University but whose invitation to speak on that campus was rescinded); former Secretary of State Condoleeza Rice at Rutgers University (who declined a commencement speech invitation after protests against her); and former New York City Police Chief Ray Kelly, whose recent talk at Brown was disrupted to the point of cancellation. Other speakers have been liberals and even leftists, most often Israelis, whose appearances have been interrupted or cancelled thanks to the efforts of BDS activists, as was the case at the University of Minnesota (Moshe Halbertal) and Syracuse University (Shimon Dotan). In certain instances, some speakers have even been compared to Nazis. Brown students protested Kelly’s campus appearance with posters of the former police chief alongside swastikas, while BDS activists nationwide have frequently used Nazi comparisons in protesting Israeli speakers.

What does it say about the current state of free speech that present-day students are quick to condemn mainstream speakers as Nazis, while students two generation ago were willing to listen to a genuine Nazi?

First, the shrinking tolerance is partly the unintended result of an otherwise positive development: the rise of Holocaust consciousness. Fifty years ago, the Nazis were recognized as criminal, but the depth of their evil had not yet sunk in. Only after the early 1960s, following the Eichmann trial, did full awareness of the Holocaust begin to dawn in western consciousness. This was particularly true of young people who had grown up after 1945. As the Brown Board of Governors explained about their initial invitation to Rockwell, current students belonged to a “different generation” than Rockwell’s and were “curious” about “painful” ideas that were “distant from us by twenty-five years.” This curiosity had the positive effect of generating increasing attention to the Jewish experience in the Holocaust in subsequent decades – so much so, that Nazism became associated with the apex of evil.

At the same time, however, the spreading awareness paradoxically led to the widespread universalization of the Nazi legacy. As the students of the 1968 generation became aware of the Third Reich’s crimes, they applied the term “Nazi” to attack their own era’s evils, including the Vietnam War, racial injustice, the Watergate break-in, and other happenings they strongly opposed Ever since, student activists have invoked the Nazi past to criticize an enormous range of issues, many of which do not remotely resemble the crimes of the Nazi era. In all cases, however, they have done so with the goal of discrediting and silencing their opponents.

This development highlights a second irony: namely, how American Jews have shifted position on the question of free speech. At Brown in 1966, Jewish students, faculty, and community figures led the fight to cancel Rockwell’s campus appearance. They were less concerned with protecting the principle of free speech than with preventing speech from offending, hurting, or even endangering those who might be exposed to it.

Today, many Jews find themselves in a very different situation because of the furor surrounding the subject of Israel on college campuses. Because campus speakers discussing Israel-related topics have often been disrupted and sometimes shut down, many Jews have come to see that it is in their interest to defend free speech unconditionally to avoid being silenced. (They are equally interested in preventing the inflation of the term “Nazi” into an all-purpose slur, lest it be used against them).

To be sure, defending the principle of free speech can put Jews in a difficult position when faced with especially controversial speakers. When Columbia University invited Iranian President Mahmoud Ahmedinejad to speak on campus in 2007, for instance, Jewish groups were appalled. They were even more shocked by the counterfactual claim of Columbia’s dean of international affairs, John Coatsworth, that the university would have invited Adolf Hitler himself, “if he would have been willing to engage in debate.”

This hypothetical example is extreme, but it confirms a larger truth; whether the Nazi legacy is invoked to prevent or permit the appearance of controversial speakers, it remains the ultimate litmus test for our society’s willingness to allow the expression of unpopular ideas. As colleges and universities continue to debate this difficult topic, the case of George Lincoln Rockwell’s appearance at Brown half a century ago should remind us of the importance of supporting free speech as an absolute principle.

Shifting political currents make clear we can never know what side of the issue we will be on. While we may be tempted on one occasion to sacrifice the principle of free speech to protest a speaker we oppose, we may find ourselves embracing it in another instance to defend a speaker we support. Since the standards for defining acceptable and unacceptable speech are inherently subjective, the only choice for anyone who wants to retain the right to be heard is to support free expression unconditionally for everyone.

This is especially true given the possible threats to free speech looming on the horizon. In light of the fact that our President-elect has openly called for changing America’s libel laws and his campaign manager has warned potential critics of the incoming President to “watch what they say,” it is more important than ever to commit firmly to the value of free speech in all of its forms – critical, polemical, and, yes, offensive. While it can be misused as a tool of aggression, it is indispensable as a means of defense.

Gavriel Rosenfeld is an alumnus of Brown University (class of 1989) and a Professor of History at Fairfield University. His latest book is the edited collection, “What Ifs of Jewish History: From Abraham to Zionism” (Cambridge University Press).