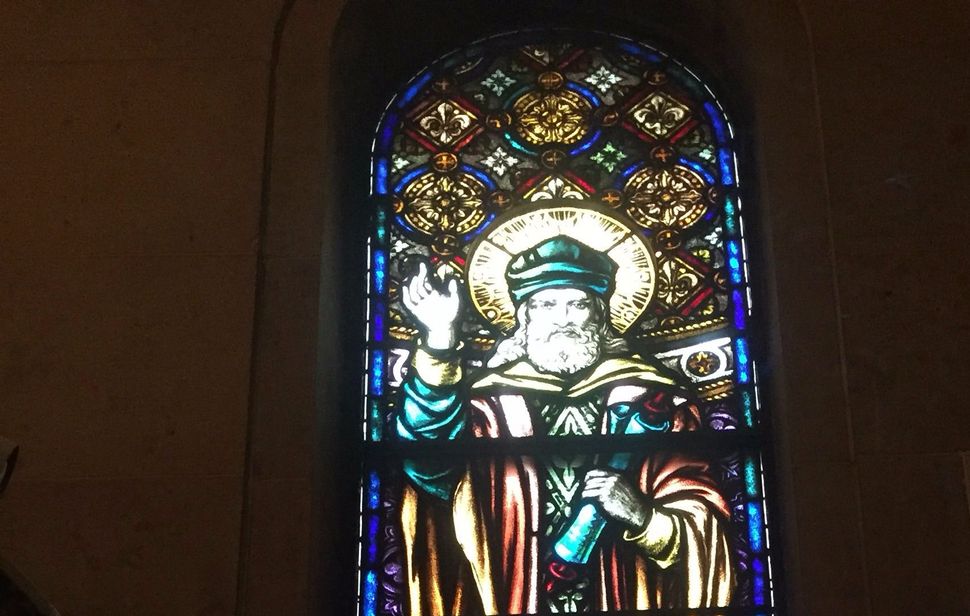 The biblical Balaam’s reputation centers on striking and eventually talking to his ass — the donkey sort. But as far as rabbinic tradition was concerned, Balaam may as well have been one himself.

The prophet, who saw God thwart his effort to curse the Israelites and turn his attacks into blessings, couldn’t see an armed angel sent to deter him. After striking his donkey for avoiding the angel, Balaam finally heard from the eloquent beast, which rebuked him for questioning its loyalty. Even after Balaam saw the angel, he decided to join with Balak, the Moabite king, to curse the Jews.

It’s no coincidence that rabbinic commentaries often refer to “Balaam the evil one” (rasha).

So I was surprised when I found myself face-to-face with a celebration of Balaam in the nave of Minneapolis’ Basilica of Saint Mary, the first U.S. basilica which is now in its 90th year.

Abraham, Jacob and the other Old Testament figures depicted in the stained glass windows — created in the 1920s by the studios of Minneapolitan artist Thomas Gaytee, who previously worked for Louis Comfort Tiffany — made sense. But why Balaam, whose ego and desire for gold got in the way of an opportunity to try to destroy the Jewish people?

Balaam is by no means invisible in art history. Rembrandt painted him reeling back to strike his donkey four years after his teacher, Pieter Lastman, captured the same moment, albeit less dramatically. The 13th century Psalter of St. Louis sets the scene in a dream-like frame, while various black-and-white and color prints followed a depiction by 16th century Netherlandish artist Maerten de Vos, who portrayed Balaam and Balak overlooking the Jewish camp they so hoped to curse and destroy. These works depict, though, rather than celebrate.

At the Minneapolis basilica, Balaam, identified by an inscription, is haloed as a saint. He raises one hand in a teaching gesture, while he carries a scroll, the prop of a scholar, in the other. His lavish robes fall over his bare feet, above another inscription — this one inside a scroll — from Numbers 24:17, “… a star shall rise out of Jacob, and a scepter shall spring from Israel.” It is a cherry-picking from one of several instances where God manipulated Balaam’s tongue to issue a blessing rather than a curse.

Does an accidental blessing make an anti-Semite window worthy?

In Minneapolis, Balaam is connected to the scene of the Magi, who come from far away lands to meet the baby Jesus, says Johan van Parys, director of liturgy and sacred arts at the basilica. The Magi follow a star, which is based on the prophecy from Numbers 24:17 of the star rising out of Jacob and the scepter springing from Israel, which derives from Balaam’s inadvertent blessing.

“He is a very complex figure. Though he is seen as a prophet, in three places in the Christian writings, he is described as an evil figure. Sometimes the bigger picture is lost in favor of a smaller,” van Parys says, “in this case being the Christian interpretation of the prophecy of the star and the scepter applied to the star of Bethlehem and the Magi.”