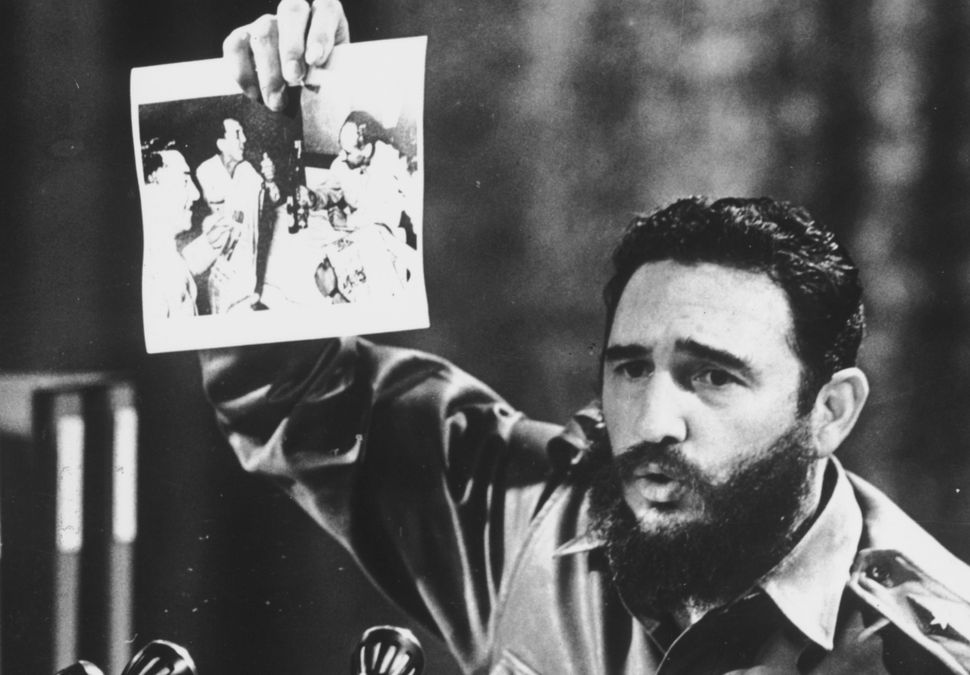 In February 1961, the Newark-born socialist, anti-Communist poet Louis Ginsberg wrote a fretful letter to his son. The poet Allen Ginsberg, among his many other vagaries, seemed over-optimistic about the Castro regime in Cuba, as his father cautioned: “Visitors tell of being in manipulated throngs chanting pro-Soviet and anti-American slogans in whose frenetic atmosphere it was as dangerous to dissent as ‘Amid a hostile throng of benighted, hate-mongering white citizens, KKK groups in the South.’ The fact remains that the Commies have poured in arms into Cuba and that the Commies call the tune in Cuba: there is no freedom of the press, no freedom of speech in Cuba… Further, the people, as I say, have been robbed of free speech so that it is dangerous in Cuba to dissent.”

In March 1961, Ginsberg replied to his father, reminding him that he had briefly encountered Castro during the latter’s visit in 1960 to New York for a United Nations meeting. On that occasion, Castro and his entourage stayed at the Hotel Theresa in Harlem, under conditions reproduced in the Alfred Hitchcock movie “Topaz” (1969) The younger Ginsberg reminded his father, “I notice that every time I open my mouth on Cuba… I get accused of being a Red or Red-dupe and if Castro reacts to this in the same way I do I see nothing strange in his present anti-US hysteria.”

Allen Ginsberg did begin to notice strangeness when he actually arrived in Cuba, on a tour of Communist countries where his project was to advocate free speech. In 1965, Ginsberg went to Cuba, ostensibly as a correspondent for “The Evergreen Review” and judge of a poetry prize conferred by Havana’s Casa de las Américas. Ginsberg would be promptly deported after speaking at Havana University against the Castro government’s persecution of gay people, describing the ferociously homophobic Che Guevara as “cute,” and hinting that Castro’s brother Raúl – since 2008 President of the Council of State of Cuba and the Council of Ministers of Cuba – might be gay.

Ginsberg also proposed that Cuba’s political prisoners who had been sentenced to death should be forced to work as elevator operators instead of being executed. Such energetic clowning and Yippie-style japes were a familiar part, even by then, of Ginsberg’s world tours, although in Castro’s Cuba, satiric humor scarcely thrived. Ginsberg later recounted in an essay that one night in Cuba, he was roused “with (a) knock on my door and 3 miliciano entered and scared me…Told me pack my bags the immigration chief wanted to talk to me, and wouldn’t let me make phone call… told me they were putting me on the first plane out.” Ginsberg was forced onto an Aeroflot flight to Prague, where he would be ceremonially crowned Kral Majalies (King of the May) at an annual festival. Ginsberg modestly dedicated his crown to Franz Kafka, but he would soon be deported from Prague as well. Meanwhile, things did not go well in Cuba for the gay people who had been exposed to Ginsberg’s free speech advocacy.

Ediciones El Puente (The Bridge Publications) had been founded in Cuba after the 1959 revolution by the poet José Mario Rodríguez. Responding to ambient homophobia, by 1965 Castro’s government had set up concentration camps, termed Military Units to Aid Production (UMAP), for gay people and any opponents of the regime who could be accused of being gay. The Castrist slogan “Work will make you men” was posted around these Cuban forced labor camps. Decades later, Rodríguez recalled in the “Revista Hispano—Cubana” (2002), he and fellow hosts of Ginsberg were repeatedly arrested and subjected to all-night police interrogations because of his association with the American poet. Detained fully 17 times, Rodríguez and his fellow poets were finally accused of the formal crime of “consorting with foreigners.”

Earlier, Ginsberg’s publisher and promoter of the Beat Poets, Lawrence Ferlinghetti, of French/Portuguese Sephardic heritage, had also shared his mixture of optimism and naiveté about the new regime. As Ferlinghetti’s travel journals and letters to Ginsberg indicate, he preceded Ginsberg by visiting Havana in 1960. Sitting at a restaurant in Havana, he noticed Castro walking down the street: “I see a big guy with a beard wearing fatigues smoking a cigar…. I rush outside [and] shake Fidel’s hand and tell him I am poeta norteamericano – he’s speechless – my news really astonishes him.” Yet upon his return, Ferlinghetti published a poem, “One Thousand Fearful Words for Fidel Castro” (1961) which was hardly a fan letter:

“When in the course of human events/ it becomes necessary for one people/ to dissolve the political bonds/ which have connected them with another/ …We’ll dissolve you first, Fidel/ you’ll be dissolved in history/ we’ve got the solvent.”

No such dissolution was immediately proposed by Susan Sontag, who went to Cuba in the early 1960s. Rafael Rojas’s “Fighting over Fidel: The New York Intellectuals and the Cuban Revolution” notes that while Sontag was aware of “Stalinist discourses and practices in Cuban socialism – which included the establishment of the UMAP labor camps (Unidades Militares de Ayuda a la Producción), the expulsion of Allen Ginsberg from the island, the persecution of homosexuals, and attacks on dissident writers such as poet Heberto Padilla – she firmly believed that the Cuban leaders would correct these errors.” Instead, Sontag would correct her own error years later. In 1982 she told the “New York Times” that a “very large portion of the left has underestimated the wickedness of the Communists.” Sontag realized this, she explained, after the Warsaw Pact invasion of Czechoslovakia in 1968. She further admitted, “It’s a mistake I shared from the early 60’s, when I went to Cuba and was terrifically impressed with the Cuban revolution (which was not then even Communist)…”

In 1989, her revised views led Sontag to co-sign a wistful “Open Letter to Fidel Castro” with Saul Bellow, Elie Wiesel, and her son David Rieff, among others, gently hinting that with the fall of the Berlin Wall it might be time for free elections in Cuba, preceded by other human rights reforms. Sadly, these worthy notions were not heeded by the Castro dictatorship. Yet Sontag, with her time lag before realizing what was happening in Cuba, seemed positively prescient compared to the baffling, enduring obtuseness of Norman Mailer on the subject. As his biographer J. Michael Lennon noted, Mailer called Castro the “first and greatest hero to appear in the world since the Second World War,” likening him to Emiliano Zapata, a leader of the peasant revolution in Mexico portrayed by Marlon Brando in the 1952 Hollywood biopic “Viva Zapata!” Yet this was no mere confusion of onscreen fiction and historical reality. Lennon observes, “Over the years, [Mailer’s] belief in Castro’s greatness never flagged and was strengthened when they met in Cuba decades later.” Another sadly overfamiliar quote from Mailer ranks among “true geniuses” Castro, Muhammad Ali, Charlie Chaplin, and Ezra Pound. If tabulating acumen in lists were useful, Mailer’s boosting of Fidel Castro might have an unfortunate effect on his posthumous ranking in American letters.