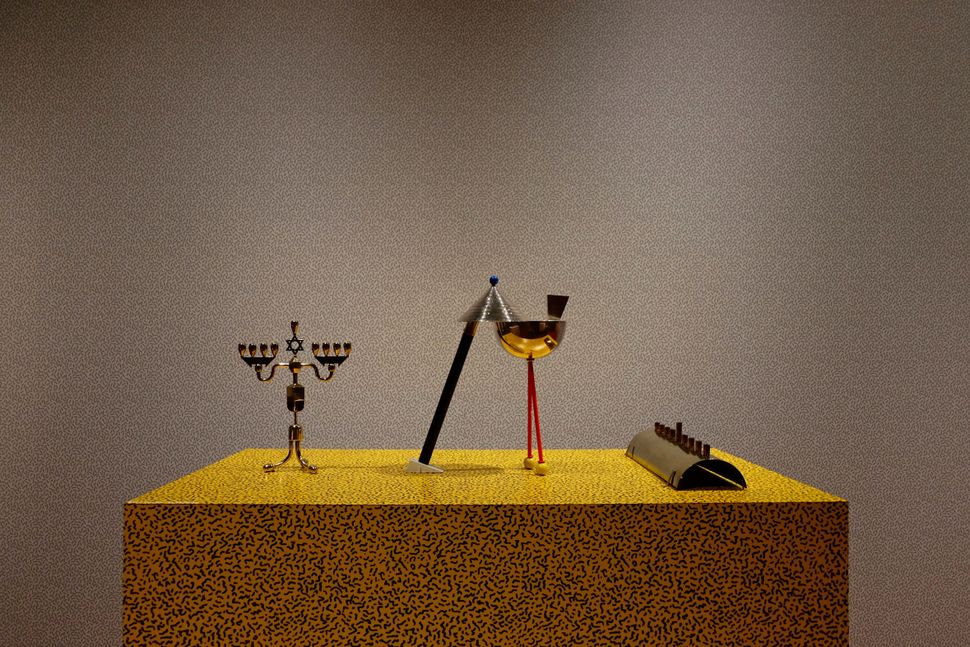 Judaica, like all religious art, represents an aesthetic dilemma: Are these religious objects primarily objects of worship, or do they have an aesthetic value abstracted from any potential uses? Even if the answer is “both,” context is critical. Most Judaica exhibits that I have seen (exhibits at the Jewish Museum in Prague, or the Museo Ebraico di Roma for example) attempt to be non-committal when it comes to the context in which they present their pieces. Most often, the pieces are presented first as historical-religious artifacts (i.e. “look how Czech Jews of the 1830’s made seder plates”) and secondarily, often tepidly, for their aesthetic properties (i.e. “but also look how pretty they are!”).

The somewhat desultory nature of these exhibitions leaves one wondering just what one is supposed to be looking for. Should we, like good historical observers, admire the preservation efforts, nodding at the slight rust at the base of the piece (the objects must show their age) while praising the sterling sheen of the rest? Or should we first sing lukewarm praises of its design, then reflect on the remarkable continuity of Jewish practice over the years? The dichotomy is not always so stark, of course, but the wishy-washy curation in Jewish Museums throughout the world often makes for homogenous, downright boring, viewing experiences – relevant perhaps to historians or a few religious observers. In other words, curators often seem to believe that the objects they display are interesting enough and therefore present pieces without any kind of creative presentation to buoy the viewing experience.

Thankfully, New York City’s Jewish Museum, with the current iteration of its “Masterpieces & Curiosities” series, has managed to create an exhibition focused on Judaica (specifically menorahs and hanukkiahs) that is both historically and aesthetically fascinating. “Memphis Does Hanukkah”, centers around designer and artist Peter Shire’s “Menorah #7” (1986), and uses Shire’s piece as a jumping off point to reflexively examine the work of Memphis (an Italy based design group), of which he was a celebrated member.

Even with the Memphis aesthetic in mind, you would be forgiven for not recognizing Shire’s creation as a menorah upon first glance. (For those wondering – no, it is not kosher). Visually, the piece has more in common with a Calder mobile or a Moholy-Nagy work than it does with any traditional conception of what a menorah ought to look like. 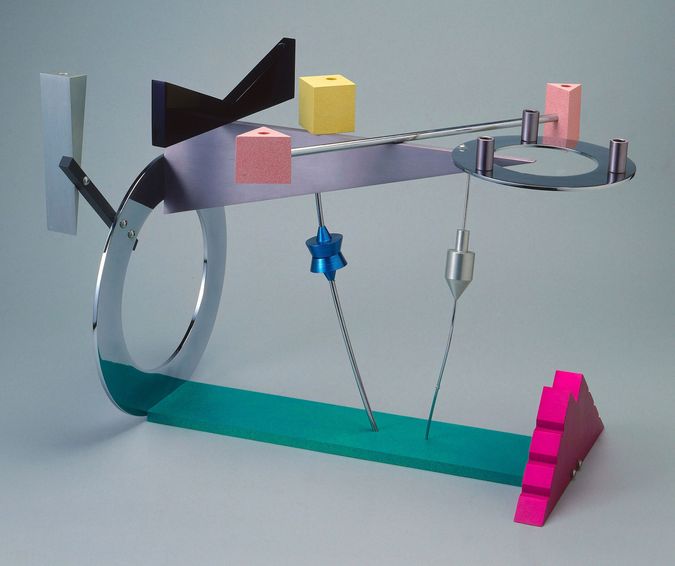 Replacing the usual menorah and hanukkiah design – either symmetrical, with three or four candles on each side of the shamesh, or asymmetrical with all six or eight candles off to one side of the shamesh – is a haphazard collection of precariously balanced colors and shapes. Upon first glance, the piece might seem like numerous sculptures pasted together – Frankenstein’s menorah – but upon closer inspection, Shire’s creation is more organized than it appears. He plays upon Hanukkah traditions with two metal “tops,” which straddle the thin supports of the upper element. They would be entirely useless as dreidels, but their shape and context are still enough to evoke the game.

Placed at opposite ends of the piece are the two biggest clues as to the work’s ostensible “function.” The largest candle holder, set alone at the back of the structure (though it’s impossible to really say what is front and back) reads like a play on the shamesh. The circular plate with the hollow center that sits at the tip of the triangular element at the opposite end displays candle holders that resemble those of a traditional menorah. 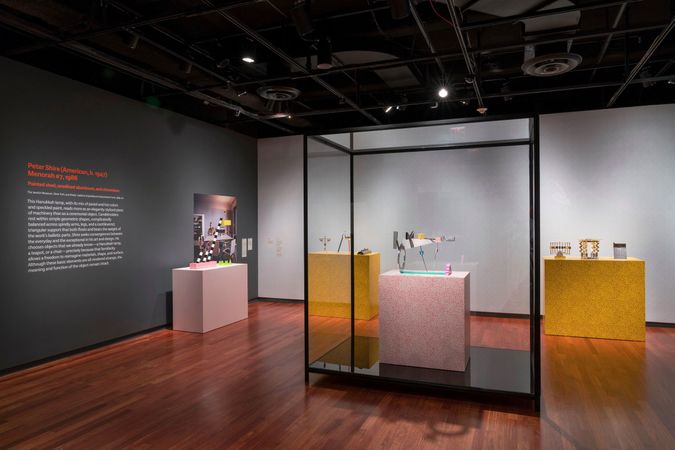 “Menorah #7,” placed in a glass case at the center of the exhibition (like many of Shire’s creations, the work demands to be seen from all sides), serves as the organizing principle for the rest of the pieces. The curators have juxtaposed menorahs and hanukkiahs, both more traditional and more avant-garde, with other Memphis pieces.

In the exhibit’s strongest display, we see, from left to right, the unattributed “Hanukkah Lamp” (1930’s-1940’s), Peter Shire’s “teapot” “Anchorage” (1983), and Donald E. Kooker’s “Hanukkah Lamp” (1951). The two lamps flanking Shire’s “teapot,” are, taken alone, nice albeit a bit unremarkable. The unattributed lamp is a copper homage to machine engineering, with its teardrop motif (as the exhibition catalogue points out, tear drops “emerged as a shape that fluidly reduced friction and drag” for airplanes and cars) and nuts-and-bolts construction. 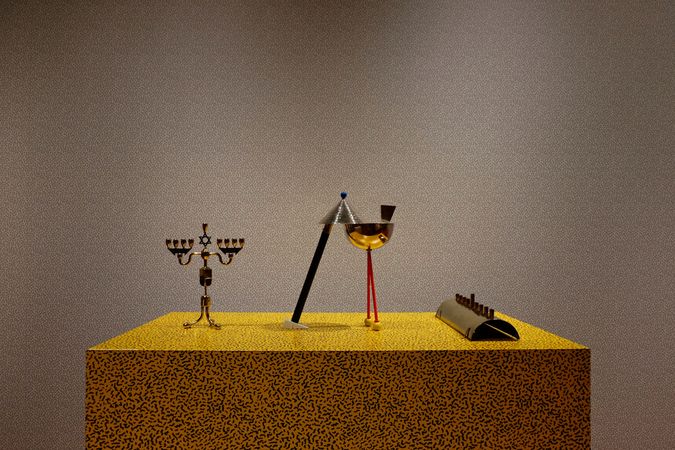 The Kooker piece is more historically than visually interesting (without the historical explanation it simply looks like a generic metal hanukkiah). The menorah is comprised entirely of used casings and cartridge shells from the Korean War. Kooker, at the time a First Lieutenant in the U.S. military, created the menorah in Korea for Jewish soldiers who did not have another menorah on hand.

The exhibit’s triumph is its recontexualization of pieces like Kooker’s. By placing the two Hanukkah lamps next to one of Shire’s curious works, the exhibition’s curators have breathed new life into objects that might otherwise have languished in a staid display next to an undistinguished (but old!) piece of Judaica. That juxtaposition forces the viewer to consider the aesthetic merits of the more traditional pieces displayed, and also puts those pieces in conversation with Memphis in a fascinating way. Next to Shire’s “Anchorage,” Kooker’s menorah is not just a piece of Judaica (visually speaking), but also a reflection of Memphis’ usage of “low brow” or industrial materials. Had we seen the unattributed menorah next to a more traditional piece, we might note the uncommon shape of the candle holders, but might not consider the work’s place within the larger context of aesthetic machine worship.

Also on display are two textiles (one Memphis, one 16th century Uzbek), a kitschy print of a dinosaur on an invitation to the first Memphis exhibition in 1981, Peter Shire’s mezuzah “Celestial” (1986), and other pieces. All of this is set against a number of wonderfully vulgar Memphis graphic plastic veneers – loudly colored speckled patterns – that cover the walls and pedestals.

This is Judaica done right, Judaica made interesting, made relevant. Here’s hoping that other Jewish Museums around the world take note.

“Masterpieces & Curiosities: Memphis Does Hanukkah” is on display at the Jewish Museum at 1109 Fifth Avenue until February 12th, 2017.