Could a Song Save the World? And Other Things That Make Us Go ‘Ugh!’ 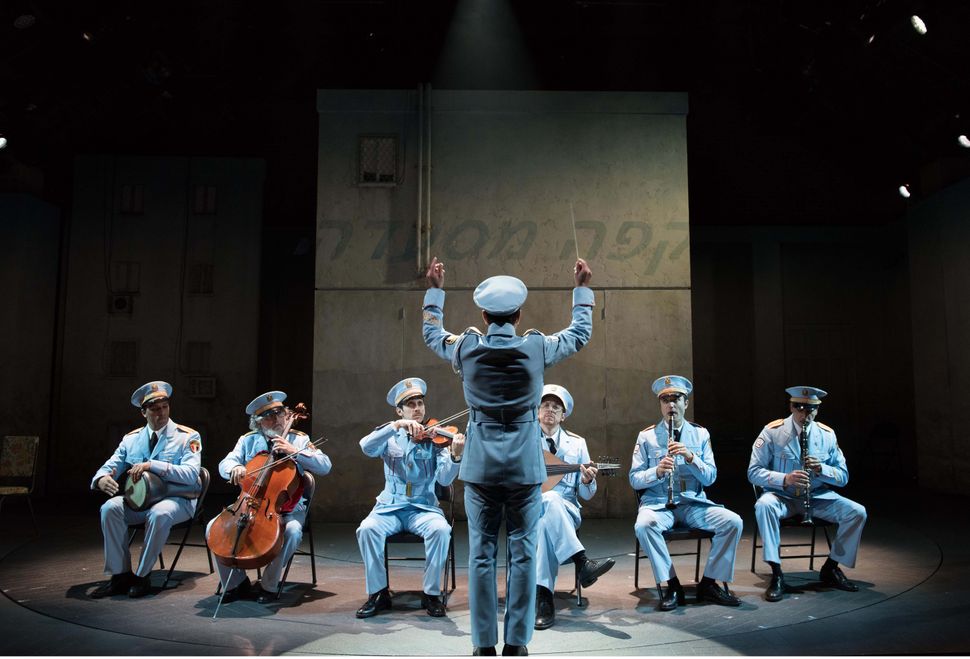 If everyone in the world were a classical musician, we’d long ago have made peace in the Middle East.

That’s a realization I had in the early 2000s, reading in the Times about yet another youth orchestra for Israeli and Palestinian prodigies — or maybe it was a chess program for Jewish and Muslim grandmasters or a plan to build understanding through retiree backgammon. In any case, the point was the same: There are innumerable well-intentioned programs to create understanding between Jews and Arabs. They just don’t seem to have done much good in solving the larger problems.

Such is the reality of “The Band’s Visit,” a sweet and elegant but rather trite new musical about Israeli-Arab interpersonal connections opening tonight at the off-Broadway Atlantic Theater Company.

Adapted from a much-praised 2007 Israeli film of the same name, “The Band’s Visit” chronicles the misadventure of a group of Egyptian men, the Alexandria Ceremonial Police Orchestra, who have arrived in Israel to play at an Arabic cultural center in the town of Petah Tikva but instead end up in the small — and fictional — desert village of Beit Hatikva. (There is no P sound in Arabic, and Arabs speaking other languages often replace Ps with Bs.) Finding neither a cultural center nor Arabs there, nor a hotel or a bus out till morning, the men visit a small restaurant, where its proprietor and staff agree to put them up for the night. Human kindness and cross-cultural charm ensue.

The stage version is, in fact, deeply charming, from its first moment, when the audience enters to find suitcases and instrument cases arrayed across the front of the stage and a “Please turn off your cell phones” messages projected on a scrim in English, Arabic, and Hebrew. Directed by David Cromer, it confronts its material with a light, wistful touch and a parade of other small, clever bits of stage business on Scott Pask’s spare, evocative, rotating set.

David Yazbek, who has written bouncy Broadway scores including those for “Women on the Verge of a Nervous Breakdown” and “Dirty Rotten Scoundrels,” is here in especially fine form. His music integrates Middle Eastern sounds into soulfully poppy show songs, and his lyrics display a sly wit, from his opening number about life in a place with nothing to do, “Waiting,” to a lovely number about the passion that young Israelis once had for some Egyptian art, “Omar Sharif.”

The TV and movie star Tony Shalhoub, who also has a long list of theatrical credits, leads the cast as Tewfiq, the conductor and apparent administrator of the small orchestra. It’s no surprise that he well portrays a kind, restrained, and fundamentally decent troupe leader; what’s impressive is how nicely he sings. He has a clear, mournful, almost cantorial voice in his duet with Dina, the restaurant owner, with whom he shares an unconsummated flirtation.

But it’s Katrina Lenk, playing Dina, who is the star of this generally well-acted show. (Many of the performers are of Middle Eastern descent.) She gives a beautiful performance as the kind, sexy, thwarted, resigned restaurant owner and de facto leader of the locals, charismatic and compelling. You understand why Shalhoub’s Tewfiq is so drawn to her — and that’s before you even consider her singing — but you also understand why he cannot allow himself to get involved with her.

It’s interesting that a story that made such a successful film a decade ago today feels so trite, and I suppose it’s possible that to some degree that has to do with the current mood of the country and the world. The movie, and the musical, do a fine job of making the point that we’re all people, with similar feelings and dreams and disappointments. Perhaps it’s simply that in the wake of December, in the wake of Brexit, in the wake of another fruitless decade of settlement-building, that we’re-all-people point feels irrelevant at best or chimerical at worst.

But I also don’t think it’s helped here by Itamar Moses’s book, which doesn’t solve that problem while also adding a few of its own. My notebook is littered with “ughs,” like when Dina sings of her love for Omar Sharif movies and the Egyptian singer Oum Kalthoum, and Tewfiq responds that “not everybody feels like you.” (Ugh.) Or when Haled (Ari’el Stachel), the flirtatious, Chet Baker-loving Egyptian trumpeter confesses that he doesn’t get to “go with girls all the time”: “You know what is arranged marriage?” Yes, ugh, we do.

Those clunky, obvious moments underscore the Hallmark sentimentality of the “The Band’s Visit,” but, still there are many well-crafted ones, like when some of the Israeli and Egyptian men almost accidentally join into a chorus of “Summertime,” a more elegant reiteration that music can, perhaps, bring us together. Color me skeptical. But, then, if everyone in the world were a George Gershwin fan…

Jesse Oxfeld has written about theater for the New York Observer and Entertainment Weekly.

Could a Song Save the World? And Other Things That Make Us Go ‘Ugh!’