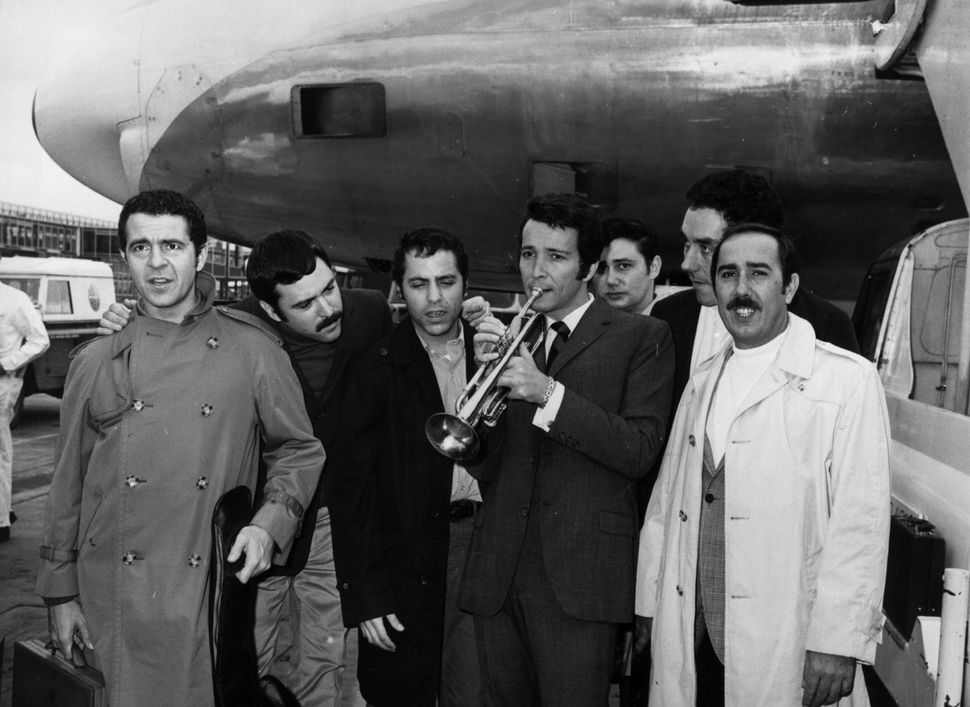 Herb Alpert and the Tijuana Brass Image by Getty Images

This first night of Hanukkah falls on Christmas Eve this year, a collision of holidays that — for me, at least — inevitably brings to mind all the classic Christmas songs that have been written by Jews. Irving Berlin’s “White Christmas” is the big blini, of course, having been covered more than 500 times since Bing Crosby first sang it on his NBC Radio show on Christmas Day 1941. But there are over a dozen other Yuletide standards containing lyrics or music penned by Jewish composers, including “Winter Wonderland” (Felix Bernard), “Rudolph the Red-Nosed Reindeer” (Johnny Marks) and “The Christmas Song (Chestnuts Roasting on an Open Fire)” (Robert Wells and Mel Torme). While there was undoubtedly an element of opportunism in the creation of these songs — any professional songwriter will tell you that a good Christmas copyright can mean an annual infusion of megabucks into your bank account — there’s no denying their excellence (at least as far as Christmas songs go), or their permanent positions in the secular Christmas canon.

But when it comes to Christmas albums by Jewish artists, the selection is considerably less distinguished. To say that the 1963 “A Christmas Gift for You From Phil Spector” is the greatest Christmas album ever made by a Jew is like saying that Sandy Koufax was the greatest Jewish pitcher of all time; even the most incorrigible contrarian would have a difficult time presenting a convincing counterargument. Featuring timeless vocal performances by the Ronettes, the Crystals, Darlene Love and Bob B. Soxx & the Blue Jeans, and wrapped in glorious “Wall of Sound” arrangements that perfectly channel the bustling giddiness of the holiday season (nobody loved sleigh bells like Spector), “A Christmas Gift for You” may well be the greatest Christmas album ever made, period; even the creepy Spector monologue that closes the album — and sounds even creepier when we have the knowledge that the eccentric producer is currently doing 19 to life in the California state prison system for the 2003 murder of actress Lana Clarkson — can’t dull its festive glow. 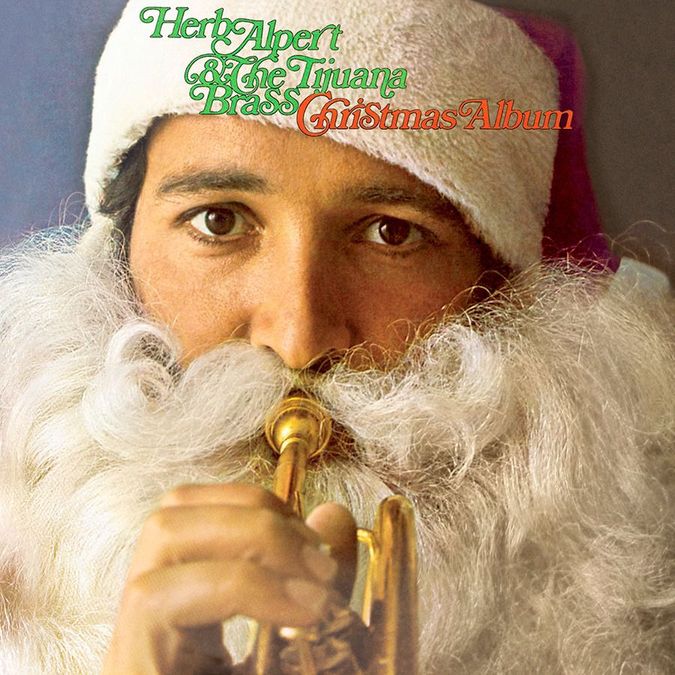 Aside from Spector, however, you generally don’t see many Jewish artists showing up on “Best Christmas Album” lists, and for good reason. Barbra Streisand’s “A Christmas Album” has sold over 5 million copies since its release in 1967, but its combination of hushed reverence and Broadway-style overreach hasn’t aged particularly well. Barry Manilow’s 1990 Christmas LP bears the defensive-sounding title “Because It’s Christmas,” as if offering an excuse for the album’s snoozy, schmaltzy existence. Bob Dylan’s 2009 holiday entry, “Christmas in the Heart,” remains the most puzzling (and least listenable) chapter of the Nobel Prize-winning singer/songwriter’s enigmatic career, while Neil Diamond has released no fewer than four profoundly inessential Christmas albums over the past 25 years — most recently, this year’s “Acoustic Christmas,” which contains such cringe-worthy moments as Diamond lightly jigging his way through “Christmas in Killarney.” And can the 8 million people who bought Kenny G’s 1994 LP “Miracles: The Holiday Album” be wrong? Yes, they most certainly can.

But there’s one full-length Jewish Christmas record that rarely gets its just due: Herb Alpert & the Tijuana Brass’s wonderful “Christmas Album.” Having already dominated Billboard’s Easy Listening charts for much of the 1960s with instrumental albums like “Whipped Cream & Other Delights” and “!!!Going Places!!!” Alpert and the Tijuana Brass applied their patented “Ameriachi” sound to 10 Christmas-related tracks, unveiling the festive results on December 16, 1968. Though the sunny and playful record might have seemed like an odd capper to a tumultuous year of riots and political assassinations — and undoubtedly sounded like it was beamed from an entirely different universe than the Beatles’ “White Album,” the Rolling Stones’ “Beggars Banquet” or Jimi Hendrix’s “Electric Ladyland,” all of which had hit the shelves in the preceding weeks — it immediately soared to the top of Billboard’s Christmas charts upon its release.

In retrospect, it’s not hard to understand why: “Aural comfort food” would certainly be one way of describing “Christmas Album.” The record’s lush choir and string arrangements by Shorty Rogers (a Jewish trumpeter who was one of the originators of West Coast jazz) contrast beautifully with the TJB’s spare, lightly swinging approach. On upbeat tracks like “Winter Wonderland,” “Jingle Bells,” “My Favorite Things” and “Sleigh Ride,” the overall effect is kind of like dozing off in front of the fire in a spiked eggnog reverie, then dreaming that you’re sailing in Santa’s sleigh across the Southern California sky on a 72-degree December afternoon, as the tinsel-wrapped palm trees below you sparkle brightly in the sun.

There’s time for fireside romancing, too, as the Tijuana Brass[ slows down “Let It Snow!!”(penned by Jews Sammy Cahn and Jule Styne) to a smooch-worthy tempo, and Alpert puts down his trumpet and takes the microphone for a slow-burning rendition of “The Christmas Song,” delivered in the same gentle, breathy manner as “This Guy’s in Love With You,” the Burt Bacharach/Hal David composition that he’d taken to No. 1 on the Billboard pop charts earlier in the year. And speaking of Bacharach, Alpert also essays a vocal version of “The Bell That Couldn’t Jingle,” a song penned by Bacharach with fellow tribe member Larry Kusik. Though essentially a second-rate “Rudolph”-type story-song (Spoiler Alert: Thanks to the timely intercession of one Jack Frost, the titular bell eventually goes “jingling all the way”), it’s still kind of a kick to hear the best-selling Jewish bandleader of the 1960s joining forces with one of the decade’s hottest Jewish songwriters to serve up a Christmas song.

That sense of joyous cultural crossover is really one of the most magical things about “Christmas Album,” and it’s present everywhere, from the cover — on which Alpert, a nice Jewish boy from Los Angeles’s Fairfax District, dons a Santa hat and beard — to the contemplative interpretation of the traditional Mexican song “Las Mañanitas,” arranged by Baja Marimba Band leader Julius Wechter (also a Jew), and the lovely choral rendition of Bach’s “Jesu, Joy of Man’s Desiring,” which closes the record. “Christmas Album” isn’t just about Jews successfully assimilating into mainstream American culture (though there’s certainly an aspect of that to the record, as well); it’s also about the many cosmic possibilities inherent in Jews and Christians peacefully coming together to celebrate the birthday of the man who was both the most important Jewish and Christian figure in the history of the world.

And it’s all delivered with the sort of snappy-yet-laidback tunefulness that pairs marvelously with the holiday cocktail of your choice. Once considered the very epitome of Squaresville, the Tijuana Brass catalog has undergone something of a critical rehabilitation over the past two decades, thanks to increased interest in The Wrecking Crew (the all-star group of L.A. session musicians who played on a staggering number of hits in the 1960s and ’70s, including many by Herb Alpert & the Tijuana Brass) and to a renewed appreciation for the easy listening sounds of their era. Alpert and the TJB’s “Christmas Album” — which has been reissued multiple times over the past 25 years, most recently last November via the Herb Alpert Presents label — will hopefully find a bigger 21st-century audience as well. After all, in these strange and unsettling times, who among us couldn’t use a reassuring dose of Herb for the holidays?

This Christmas Eve, when my wife and I observe the first night of Hanukkah by lighting our electric menorah, we’ll have the TJB “Christmas Album” on the turntable. And for those 32 minutes or so, all will seem right with the world.

Dan Epstein is the author of, most recently, “Stars and Strikes: Baseball and America in the Bicentennial Summer of ’76.”