Lupe Fiasco Doubles Down on Bigotry With Anti-Semitic Rant 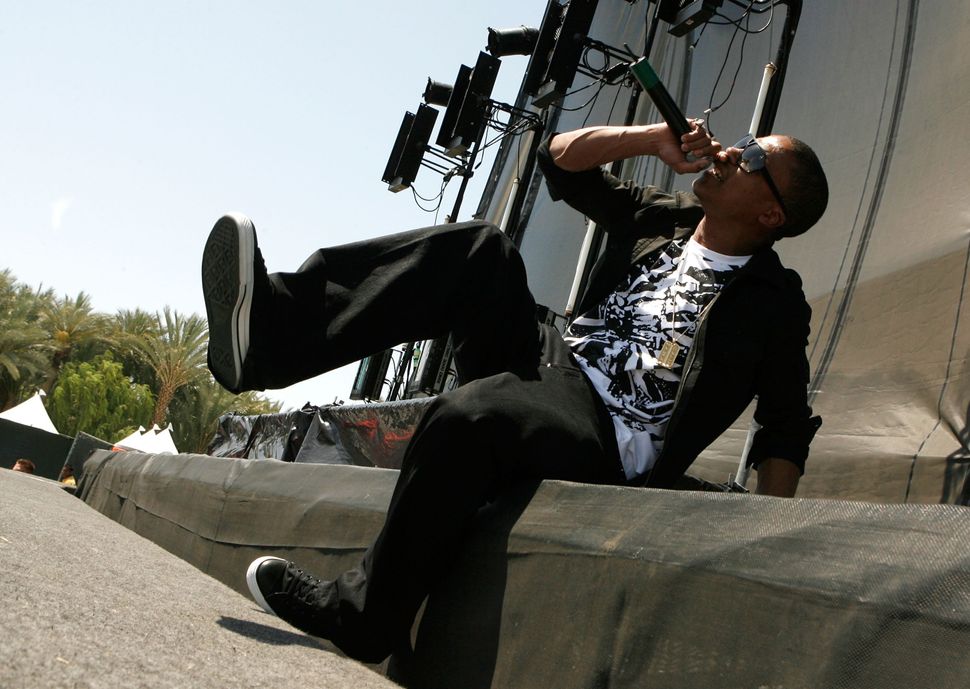 Lupe Fiasco took the stage last night at Denver’s Fillmore Auditorium, only to lecture his fans at length and intensify his anti-Semitic rhetoric. In the Chicago M.C.’s first show since his Dec 12 release of the track “N.E.R.D.,” which featured the lyrics, “Artists getting robbed for their publishing by dirty Jewish execs who think it’s alms from the covenant.” The song triggered a storm of controversy and had Fiasco arguing with fans both Jewish and non-about the lyrics, including a lengthy back and forth with Jonathan Greenblatt of the ADL.

A belligerent Fiasco took to the stage last night, as reported by Westword. As well as taunting and berating the audience throughout the night, Fiasco defended himself against the charge of anti-Semitism repeatedly. Videos of the event show him singling out audience members and asking them if they are Jewish.

“I’ve got a fun fact for y’all,” he is seen saying on the video, “Y’all ready for one of Lupe’s fun facts? What does the word ‘Semite’ mean? Y’all don’t know, do you? Do you know who I consider Semitic? Israelis. Peoples from Judaism. But also Palestinians are considered Semites. Did you know that? … So anything that is hostility or an opposition against someone who is a Semite is considered anti-Semitic … So if you have any aggressions or hostilities or war against Palestinian peoples, that makes you anti-Semitic too. Did you know that? I didn’t know that either. But who the f—k am I?”

The above logic possesses a near total blindness to historical realities and context, of course, but it is also a common canard of — guess who? — neo-Nazis and anti-Semites. Fiasco explained his supposed upcoming retirement, saying that he knew his career was over after being “painted an anti-Semite — which is like death in the music business… like you’re f-cking dead, music, movies, TV- because you’ll never be able to escape it, because they just want to be victims.”

A Jewish woman who was present at the concert described her terrifying experience at the “very charged” show. “Fiasco punctuated nearly every song break with a rant about how right he is and how he’s “not anti-Semitic at all.”

Members of the audience verbally attacked and tried to have thrown out people “who were saying they are fans but didn’t agree with his using the words dirty jew.”

“I audibly gasped”, she says, when I heard another audience member say, ‘Why would he say it if it weren’t true?’ followed up with a ‘Get the f-ck out of here!’ hurled at one critic of Fiasco who was being ridiculed, pushed, and had his hat hit off his head aggressively.”

“It was very scary and eye-opening to see in the flesh as a Jewish person watching all of this,” she continued, “I didn’t feel safe as the crowd got more riled up and the show entered its second hour. Lupe was singling out members of the audience who appeared take issue with him, and directed his lyrics and then his banter at them. Then audience members would harass and taunt them. Many people did not feel safe and left.”

What I described as “Trumpian defensiveness” on Fiasco’s part now seems all too appropriate. “The scene was a leftwing version of what I understand a Trump rally must be like,” my source said, “complete with groupthink, celebrity worship, hate, and defensiveness at the cost of honesty, openness, and dialogue.” I couldn’t have said it better myself.

Meanwhile, on Twitter, Fiasco has taken to offering sage advice about how blacks in America should care for themselves and their families (don’t drink, eat healthy, make an honest living), including this questionable proverb: “Every black family in America should own at least 2 AK-47’s w/ 500 rounds with every member of the household able to hit targets @ 50 yards.”

For a now former fan of Fiasco’s this is all very depressing. As DJ Z, a fan of Fiasco’s who took him to task over his anti-Semitic lyrics wrote, “Lupe Fiasco continues to make it more difficult to be a Lupe Fiasco fan.” Fiasco himself had some recent words for DJ Z’s website DJ Booth, which confronted him over his anti-Semitic lyrics then invited him to further dialogue, “Go f-ck yourself. All I have is violence and ill wishes for you.”

Lupe Fiasco Doubles Down on Bigotry With Anti-Semitic Rant