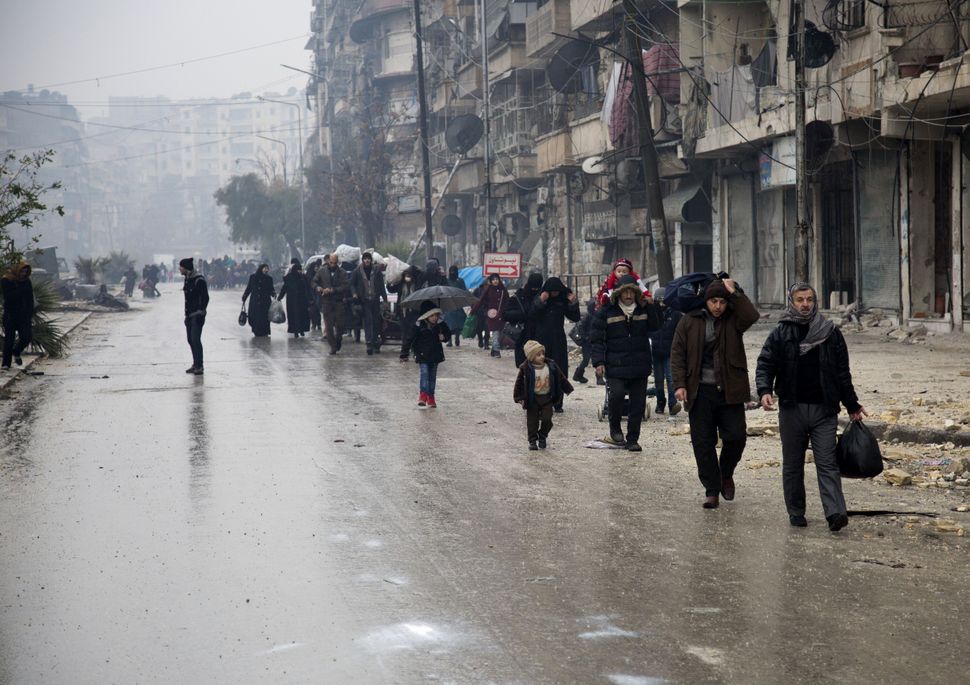 What do we mean when we say “never again?” These days, do we mean anything at all? Perhaps when the phrase was coined in 1961 by filmmaker Erwin Leiser in his Holocaust documentary, “Mein Kampf,” we might have been able to salvage some semblance of a stance from the words. We had yet to experience the moral degradations of Bosnia, of Rwanda, of Halabja, of Cambodia…God, there’s too many. But now, in 2016, 71 years after the events of the Holocaust, the case seems to be closed on what we mean by “never again” – what we mean is precisely this: nothing.

Do a quick search of any crime against humanity perpetrated since 1961 followed by the words “never again,” and you will see the same refrain, repeated ad infinitum – is this the time that we really mean it? The answer, inevitably, indefensibly, is always no. The very nature of the phrase itself suggests a forward looking mentality. The “again” implies that there will be future occasions which will necessitate the phrase’s use, but it also lays out a call to action that has thus far remained unheeded. In use, however, the phrase is not a rallying cry to take proactive measures against crimes against humanity, but a reactionary slogan – “never again” is only spoken after the irrevocable “never” has already taken place.

When the news broke earlier this week that Aleppo had finally fallen, there was an almost palpable sense of guilt-ridden relief in the various announcements. It was as if the world, which, thanks to social media, had watched the events unfold with unprecedented visual access, was finally able to let out a noxious exhalation: “at least we no longer have to watch.” The destruction of Aleppo is over simply because there is nothing left to destroy – the suffering of its people however, is far from over, as thousands remained trapped in freezing temperatures without food, shelter, or medical supplies while awaiting evacuation. Our suffering of Aleppo’s destruction has also come to an end and even though the executions and torture and displacements and bombings continue for Syria, I wonder if, after this protracted ordeal, observed by many with thinly veiled apathy, the world will be able to muster even the iota of moral strength required to care. Aleppo was the cause du jour, but when Assad comes knocking at Idlib (to which the last remaining residents of Aleppo are being slowly, perhaps too slowly, evacuated), and it is only a matter of time, will we invent new hashtags? Bring out the old slogans, only briefly retired? Or will we just watch silently, ashamed, finally, of our own pathetic impotence.

Speaking of shame, there is plenty to go around. I have seen a video circulating the internet recently in which American U.N. Ambassador Samantha Power asks the Syrian, Iranian, and Russian U.N. delegations, “Are you truly incapable of shame? Is there literally nothing that can shame you?” It’s an obvious question, with an even more obvious answer. But what is striking about Ms. Power’s “scathing” speech, is its hypocrisy. Power’s Pulitzer Prize-winning book, “‘A Problem From Hell’: America and the Age of Genocide” lays out her case for intervention in the face of crimes against humanity. She castigates the world’s leaders for indifference to mass-suffering and asks in the book’s conclusion “Why does the United States stand so idly by?” The question presents itself now, as it doubtlessly will again. As an appointee of an administration that watched Russia aid and perpetrate the worst crimes against humanity that I have seen in my short life, Ms. Power might ask herself why she sits so idly by, why she continues to serve, and whether, along with Russia, Syria, and Iran, if there is nothing that might shame her, or this country.

Let’s add this recent New York Times editorial to the litany of shame. After detailing the atrocities of Aleppo, nodding to Donald Trump’s disgusting admiration for Putin, offering a insipid defense of Obama’s flaccid and feckless non-response to Russian and Syrian atrocities, and informing us that the violence has continued despite another (failed) cease-fire, the New York Times gives us this baffling line: “When will it stop? That’s up to Mr. Assad, Mr. Putin and Iran.” If it’s up to them, the actual perpetrators of this horror, then the answer is clear – it will stop when there is no one left to kill. The lunacy of this statement is akin to saying in 1943, “Mr. Hitler, stopping the Holocaust is up to you.” The perpetrators have a vested interest in carrying their violence through to fruition – the onus is on those countries with (fading) claims to moral superiority to make it stop.

Perhaps most upsetting about the emptiness of “never again,” which we might more accurately write as “never, again,” is the way that it has “sloganized” crimes against humanity, the way that it allows us to view humanity at its worst and offer ourselves a verbal pat on the back. The way it has turned events that ought provoke a deep, meaningful discussion of existential horror into a two word tag line. “Never Again!” makes great copy, genocide does not.

So enough of our “Never Again,” our “Save Darfur,” our “#aleppoisburning,” they mean nothing in the face of our inaction, though this is surely not the last time that we will see it fit to trot them out. But when that next time comes, remember in disgrace – when duty’s all too human face came crying at our feet, we merely shrugged and sighed “never again,” again.