The Secret Jewish History of ‘The Nutcracker’ 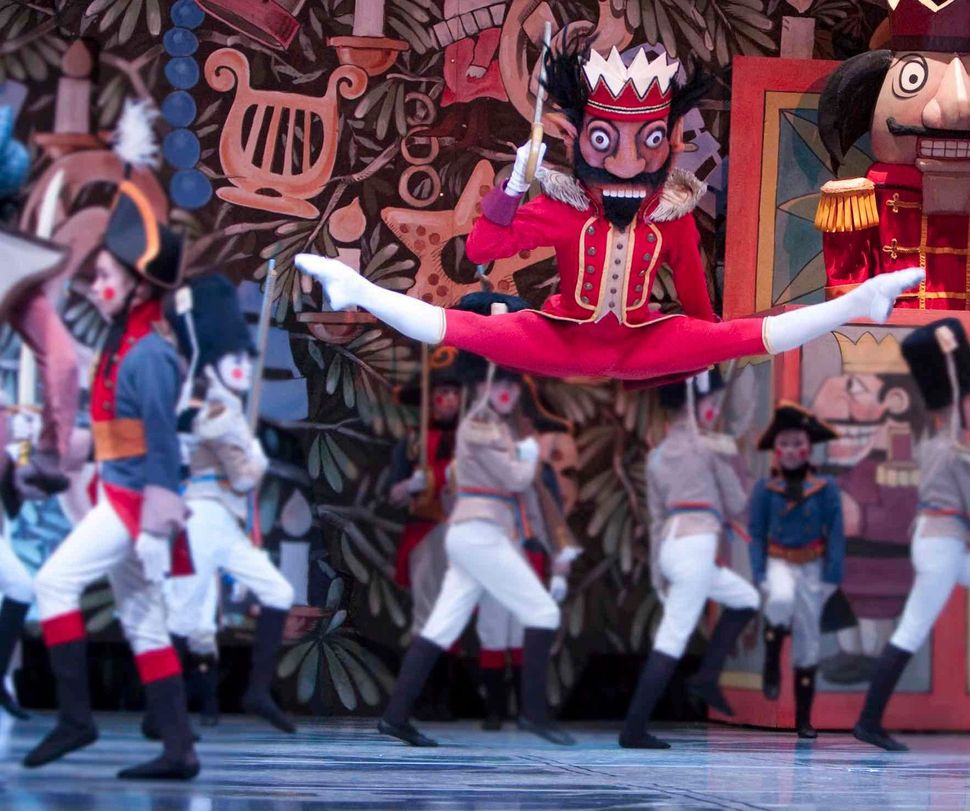 Former Pacific Northwest Ballet dancer Andrew Bartee performs as “The Nutcracker” in the Maurice Sendak-designed production of the ballet. Image by Angela Sterling

A memory of pure magic: I am eight years old, dressed in a special red fleece cap and cape, dashing to a stage door at the Denver Center for Performing Arts with snow falling around me. Backstage is magical, a cavernous room dotted with enchanting, candy-colored set pieces and filled with tutu-clad ballerinas.

I was in the Colorado Ballet’s “The Nutcracker,” where I spent hours at the theater every night for a breathtaking whole minute onstage. It never occurred to me to ask my parents how they felt about their Jewish daughter spending her holidays – and theirs, as they drove me to the theater and picked me up every night – dancing in a ballet about the magic of Christmas.

This year, as the start Hanukkah and Christmas Eve land on the same night, it struck me that I couldn’t have been the only young Jewish dancer who grew up performing the story of another little girl whose Christmas dreams take shape as a breathtaking wonderland. So turn on the “Waltz of the Flowers,” grab a mug of eggnog, and read up: this is the True Jewish History of “The Nutcracker.”

The first performance of “The Nutcracker” was, to put it kindly, a flop. It premiered at the Imperial Mariinsky Theatre in St. Petersburg, Russia just before Christmas in 1892. Choreographed by Marius Petipa and Lev Ivanov, and loosely based on E.T.A. Hoffman’s story “The Nutcracker and the Mouse King” as adapted by Alexander Dumas père, the ballet’s own composer thought it wanting. Tchaikovsky, writing a friend, commented that “in spite of all the sumptuousness it did turn out to be rather boring.” (Ouch.)

The Russian Jewish ballerina Anna Pavlova took “Snowflakes,” a ballet staged to the “Snowflake Waltz” from Tchaikovsky’s score, on tour around the world starting in 1911, but it took over forty years for the full narrative ballet to premiere outside Russia’s borders. It arrived in England in 1934, and in an abridged version in Boston in 1940. In both those landmark performances, a British Jewish ballerina named Alicia Markova danced the ballet’s most prominent female role: the Sugar Plum Fairy.

Markova was born Lilian Alicia Marks in London in 1910; she became Alicia Markova under the instruction of Ballet Russes founder Sergei Diaghilev, who reportedly asked her “Who would pay to see Alicia Marks?” Her career was in many ways unprecedented; she was the first “free agent” ballerina, the first ballerina to – scandalously – perform in only a leotard, shunning a tutu, and the first Jewish prima ballerina assoluta – the highest rank of ballerina – in the world.

“To most of us, [Markova] was, is, and always will be the one and only Sugar Plum Fairy,” Manchester wrote. “She was brittle and sparkling, like the frosted icing on a Christmas cake. There was a crystalline purity in every movement, and she made the most beautiful adagio an unforgettable experience.”

After its introduction to the Western Hemisphere, “The Nutcracker” became a subject of widespread love. George Balanchine’s famed choreography debuted in New York in the early 1950s, followed by versions from choreographers including Rudolf Nureyev, Alexei Ratmansky and Mikhail Baryshnikov.

(While audiences might think of “The Nutcracker” as clearly defined, the choreography and narrative vary wildly. In some the roles of Clara and the Nutcracker Prince are danced by children, while in others they’re danced by adults; in some Clara is named Marie or Masha; in some the duo are lovers; some versions end with the duo’s presumed deaths; some exclude the Sugar Plum Fairy altogether.)

In an even earlier televised production of the ballet, broadcast in 1958, Jewish dancer Allegra Kent performed the role of Dewdrop.

Like Markova, both Kent and Hayden were born with distinctly Jewish names; Kent as Iris Margo Cohen, and Hayden as Mildred Herman. The circumstances surrounding Kent’s name change were familial – her mother, apparently, took dire measures to reduce the family’s appearance of Jewishness – but the fact that all three dancers were made to feel their given names would impede their success suggests a strain of theatrical anti-Semitism.

Over time, as “The Nutcracker” became a cornerstone of the repertoire of ballet companies across the country, dancers, choreographers, and audiences thirsted for innovative takes on the ballet. One of the most visually exciting was designed for Pacific Northwest Ballet by the beloved illustrator Maurice Sendak in 1983, with new choreography by Kent Stowell.

Stowell, Sendak wrote in the introduction to his book “Nutcracker,” which he released after designing the ballet, “suggested we abandon the predictable ‘Nutcracker’ and find a fresh version that did honor to Hoffman, Tchaikovsky, and ourselves.” He initially believed “The Nutcracker,” he told NPR’s Bob Edwards, to be “the most bland and banal of ballets;” as he researched the narrative, though, he found it to have “weird, dark qualities that make it something of a masterpiece.” Reviewing a 1986 filmed version of the ballet directed by Carroll Ballard, The New York Times’ Janet Maslin called Sendak’s design “charmingly sinister.”

While the Pacific Northwest Ballet retired the Stowell and Sendak “Nutcracker” in 2015, after acquiring George Balanchine’s choreography, the production remains beloved.

“Grumpy and cranky as Maurice could be with adults, he related instinctively to children,” remembered Francia Russell, Stowell’s wife and collaborator.

Of course, “The Nutcracker” has also provoked resentment – where’s the great Hanukkah ballet? – and, therefore, some Jewish interpretations. Among them are “The Jewish Nutcracker,” created by World Dance Fusion’s Katy Alaniz Rous in 2010 and performed yearly in San Francisco through 2015, and “The MeshugaNutcracker,” a song-and-dance celebration of Hanukkah set in the fictional Chelm with a “Klezmer-ized” take on Tchaikovsky’s score. (Phew!)

It may be true that “The Nutcracker” is inescapably Christmas-y – after all, most productions feature a giant Christmas tree growing out of the floor – but should you find yourself in possession of children going wild to see it, or to dance in it, don’t feel chagrined. Before you go, just tell them about Alicia Markova – and Maurice Sendak, and Anna Pavlova, and more.

The Secret Jewish History of ‘The Nutcracker’