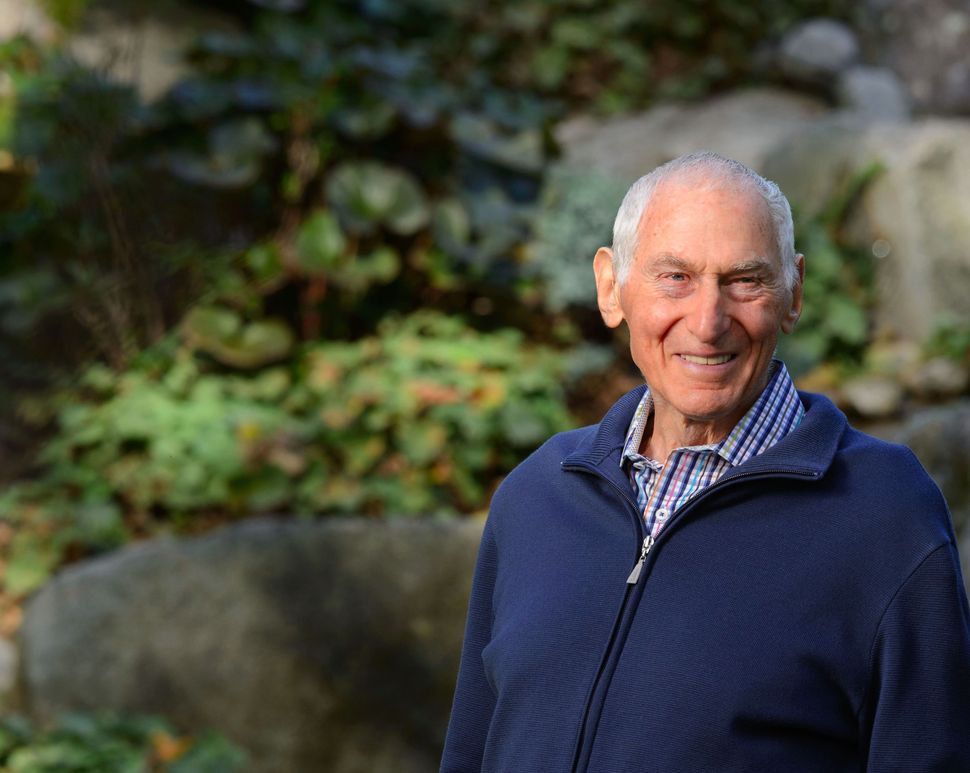 Image by Courtesy of the Harold Grinspoon Foundation

Harold Grinspoon is not a scholar, he is a businessman – a fact which he reminded me of multiple times throughout our conversation.

Yet, despite his protestations, Grinspoon has done more than most in terms of cultivating the next generation of Jewish learners. He isn’t a lecturer, an author, a rabbi, or in any way a part of the intelligentsia. He is simply a kind (and enormously wealthy) man who understands the importance of books to the Jewish communal experience.

Grinspoon is the founder of the Harold Grinspoon Foundation, which, in addition to providing consultation for Jewish overnight camps, running grant programs for Jews in Grinspoon’s native Massachusetts (as well as southern Vermont), and more, operates PJ Library, a philanthropic effort that sends out free Jewish-themed books and music to anyone who requests them. PJ Library currently operates in 12 countries, and has extended its program to provide books to non-Jewish Israeli Arabs.

“In the 21st century, I believe that for Judaism to continue to have an impact on families and society, Jewish living and learning must be actively cultivated,” he stated.

In December, I spoke with Grinspoon at PJ Library offices in Manhattan. Grinspoon’s sharp Samuel Beckett-esque features might lead one to believe, upon first glance, that he is a prototypical business magnate – cold and cunning. Perhaps he is, as an entrepreneur, but in conversation, Grinspoon exuded a familiar grandfatherly warmth.

Also joining us in conversation was Etan Harmelech (PJ Library Project Lead at the Harold Grinspoon Foundation). Read excerpts of our conversation below.

JR: Tell me about the mission of PJ Library.

Harold: I’m a business major, so I’m a little off base on philanthropy. Our mission is — I love the Jewish people, and what should we do in the dramatic changing time we are going through? Do you see the Jewish people going through, I don’t want to use the word upheaval, but dramatic change in our country right now – lets go back 50 years, do we have a 71% intermarriage rate amongst the non-orthodox?

Harold: So what does that mean, it’s has to mean something, it has to mean a dramatic change in the Jewish world. If I love the Jewish people, and we have all these interfaith marriages, we have to give these people the opportunity to learn something about Judaism. This organization is a way for us to get invited into the home — by 160,000 families every month in North America — to help educate and help children have a pleasant reading experience, and maybe to help the parents learn something about Judaism as well.

JR: On intermarriage, you send books to both interfaith families and entirely Jewish families. Do you see your project as a way to preserve Judaism in an interfaith household?

Etan: We get testimonials from interfaith families often. They often say that their children’s books give them a way to teach their spouses about Judaism, as well as their kids.

JR: Based on the press release I was sent, it seems like you came to Judaism later in life.

Harold: [laughing] I actually came to Judaism very early in my life. As a young kid I went to a public school and there I was a “kike” and a “Jew boy” and a “Christ killer” and no Catholic home would invite me in. So I don’t know if that’s what you meant, but I sure did come to Judaism fast. I wasn’t a religious Jew but I sure was Jewish.

JR: So that’s coming to Judaism from the negative side, defined by and against your Catholic peers, or I should say bullies, but did you have a realization from the positive side, affirming yourself as a Jew.

Harold: I’m not a scholar myself, but I wander around the Jewish world and I make observations. These Jewish minds have done amazing things. I think we’re 1% or less of the world population and we’ve won so many incredible awards, so I have great respect for what the Jewish mind is able to accomplish.

I’ve created a lot of wealth and that wealth never belonged to me, it belongs to the Jewish people. That creativity and development that contributed to my success wasn’t just happening overnight, it happened over centuries of scholarship and learning. Do I want to give back to a people who gave me so much? Absolutely.

JR: What was the moment that you decided to embark on this project?

Harold: I started out as a very poor boy in a two family house. I always knew that if I ever made any money, I would give it away “Jewishly.” My thinking was affected by the fact that 1/3 of the Jewish people were annihilated by Hitler. My father left Ukraine in 1908 at 8 years old and I think in some way, this project is a memorial to all those Jews who died from anti-Semitic persecution.

JR: Why books and why children’s books in particular?

Harold: If I asked you this question: you want to be a major player in the Jewish world, and you have a few dollars in your pocket, what would you do?

JR: Books would probably be my first thought, I was raised with books floor to ceiling.

Harold: There you go. But more, I’m in the car one day going home from work and I’m listening to public radio and I hear about Dolly Parton giving away books to kids ages 0-5 years old. She finds partners all over the country and I partnered with her in western Massachusetts. I thought, this is a pretty good program, the Jewish world could use this program.

There’s nothing quite as intimate as having a book with a child. Etan, tell us what the experience is like.

Etan: The experience is tremendous. You read to your kids, it’s bedtime, they’re cuddled up in your lap, and that’s your time with them after you come home from the day. A book is 12-14 pages when you’re young and they can absorb it all and you can answer any questions that they have — and they always have questions.

Harold: The books are only the initial step of building community. It is the initial step. It’s like an invitation to join up and be a part of a community. The U.S. government allows us to put one pound in the mail, and the books typically weigh around a half pound. So In addition to the books, we put a tzedakah box in along with a deck of cards with games that teach children about the idea of tzedakah.

We also do programs to help push money back into the Jewish community. One project we do is mini grants: you can apply and get a grant to do a big Shabbat or something else. We really just want to build Jewish community and the books are a stepping stone in that pursuit.

JR: I was wondering if you could talk about the selection process for the books that you send out.

Harold: When we started this project, there was virtually no market for Jewish books – it was an industry that existed in fragments due to low sales, so we had to be very patient. We have sent out over 400 different books, 88 books a year – thats a lot of books to come up with. So we have a selection committee and we are scurrying around getting great Jewish books. It is a huge responsibility on our part to develop meaningful books.

JR: Do you only select books about straightforwardly Jewish subjects or does it extend to Jewish authors as well? For example, Groucho Marx wasn’t necessarily writing about Jewish subjects, but he is a quintessentially Jewish writer.

Harold: You want part of the content to be Jewish, otherwise they can just go out to Barnes and Noble and buy whatever books they want, so your responsibility is to get a great book with a great story and have great Jewish content, that’s what we try to do.

JR: But Jewish values are so broadly defined. I’d say reading in itself is a Jewish value. The way I’m thinking about what you’re doing is that you’re designing a curriculum in a certain sense. So it’s a question of what you’re trying to teach. Could you give me your top priorities, top values that you’re seeking to instill?

Harold: We have some great minds working on the scholarship of this program. Our selection committee is engaged in an ongoing process on the question of how to ensure our books communicate Jewish values to our readers. But if you ask me to choose the value that resonates the most with me, and that I really want children to learn how to make part of their lives, it’s tzedakah. There’s nothing more important than helping other people.

Etan: A researcher at Lehigh University did an exhaustive study of all of the books put out by PJ Library. Her research led her to conclude that PJ library is taking children’s Jewish literature in a more diverse direction.

JR: Why did you make the decision not to send Holocaust themed books to children under 8 years old?

Harold: Because child psychologists recommended that we don’t approach the topic. But we have a project called PJ Our Way which is for kids aged 9-11 years old where we can tackle more complex material – here’s an example, a book for children about the Dreyfus affair.

JR: Do you have any plans to expand towards an older, teenage audience?

Harold: We made a decision to try to see what the adults of these families would like to receive, if anything, so a few months ago we offered them the option to choose one of four books for free, and 46,000 of them signed up to receive a free Jewish book, the number one book they chose was a cook book for parents and children. We’re going to stay with that project, whatever parents want to do to continue Jewish learning, we’re going to fill that void.

JR: To wrap up, tell me a little about how you got your start in business.

Harold: I was born an entrepreneur. When I was at Marlboro College in Vermont there was no washing machine there. So I purchased a hand-crank washing machine and, with their electricity and their hot water, I put a quarter meter in the machine – charged a quarter per load. The school ended up being happy because they needed some kind of washing machine – we were out in the boonies in those times.