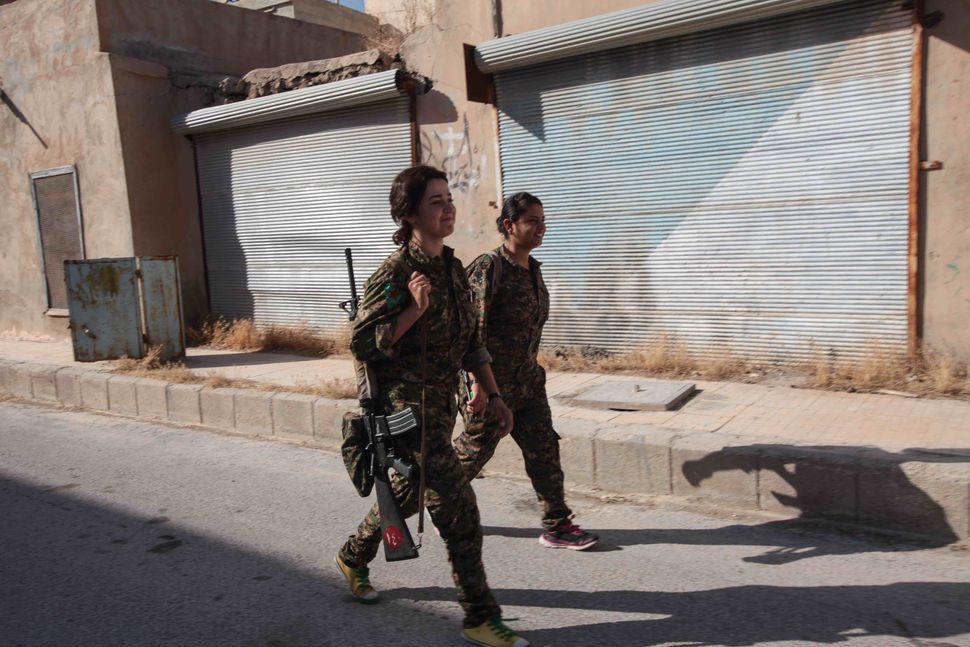 Stop the presses, the best news item of 2017 has already been written. The Independent reported earlier this week that the “Kurdish Women’s Protection Units (YPJ) is both widening its operations to include Arab women who want to join the fight against ISIS and stepping up its military assault on the extremists’ de facto capital of Raqqa in 2017.”

According to Nesrin Abdullah, a spokesperson for the YPJ, women’s role in the fight against ISIS greatly expanded in 2016 with “new military councils designed to encourage the participation of freed Arab and Yazidi women.”

The YPJ can be seen as the latest in a long line of female leadership in resistance movements, like that in Jewish history of Haika Grosman. Grosman not only served in the leadership of a prominent Polish socialist group, she also helped lead the Bialystock Ghetto uprising in 1943, and founded, along with five other women, “the anti-fascist brigade,” which aided various partisan organizations towards the end of the war.

Less successful was Hannah Senesh, who left the relative safety of Palestine in 1943 to join the British Army and fight the Nazis.

Senesh was one of thirty-three people who volunteered for a special mission to infiltrate Occupied Hungary and help save the country’s imperiled Jews. She was captured, but her courage in captivity, as well as her poetry, served as inspirations for resistance fighters during the war and after.

Just like their predecessors in Jewish resistance movements, the women of the YPJ are breaking new ground. The Kurdish forces have been consistently hailed as the most competent, successful, and dependable fighters against ISIS, but the Syrian Democratic Forces (SDF), a primarily Kurdish military umbrella group of units fighting against ISIS, did not have any women’s units – that is, until the YPJ came along. Now, in addition to the YPJ forces, there are plans to begin a Free Arab Women’s Battalion within the SDF as well as an Arab Women’s Academy – two moves that owe thanks to the efforts of the YPJ.

As Abdullah states in an interview with ANF News, when male forces inside the SDF saw “that women participated in the war and fought bravely,” it changed the way they thought about manhood, and the way that they thought about women’s role in the fight. This helped to establish the YPJ as a legitimate partner in the fight against ISIS and has led not only to the two aforementioned Arab Women’s initiatives, but also to the creation of an all-female Syrian battalion in the recently liberated city of Manbij that has been absorbed in the SDF’s al-Bab military council.

Despite their growing reputation as determined fighters, the YPJ’s mission extends well beyond the military.

“As the women of YPJ, our goal is a mental and intellectual liberation as well as the end of ISIS occupation,” Abdullah stated. She continued to say that the YPJ is fighting not only for the liberation of the land, but also “for the liberation of women and men. If this does not happen, the patriarchal system will prevail,” she said.

In order to accomplish this mission of dual liberation, the YPJ offers bilingual training (Kurdish and Arabic) in the fields such as philosophy and women’s history.

Grosman and Senesh were exemplary resistance fighters, and their contributions cannot go unnoticed, but even as resistance leaders, they still worked as a part of a male-led movement. Part of what makes the YPJ so special is that it is, according to Abdullah “the first women’s organization of war and struggle across the globe.”

“Other powers indeed have women’s units,” she said, “but there is no organization other than the YPJ where women have their own decision-making power, will, conference, congress and social mobilization.”

Abdullah states that the YPJ anticipates that 2017 will be the final year of operation for the YPJ, but only because the organization believes that a solution to the conflict — or at least, the framework of a solution — will be reached in that timeframe. In any event, the YPJ is seeking to grow their forces and influence as they work towards military and cultural liberation – wish them luck.