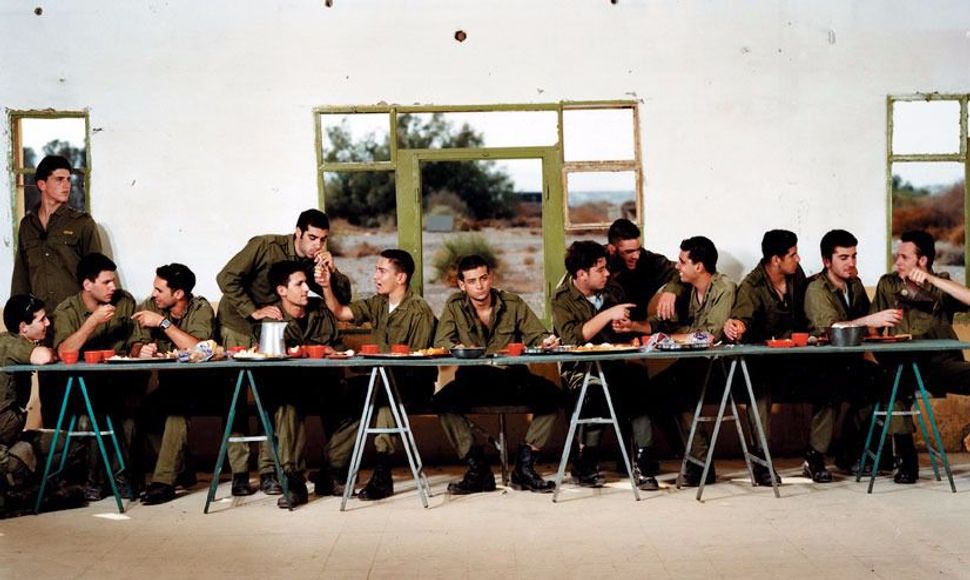 “The Last Supper,” by Adi Nes Image by Courtesy of the Israel Museum

‘It turns out that all Israeli art is about Jesus,” an American tourist said to me as he moved away from a painting in The Israel Museum’s paradigm-shifting new exhibit titled “Behold the Man: Jesus in Israeli Art.” In Hebrew, the title is a bit different: Zeh Ha’Ish, or “This Is the Man.” Throughout the exhibit, language makes a difference; the wall text often diverges in subtle but important ways in Hebrew and English.

The world’s museums are full of portrayals of Jesus, but scenes of the Madonna and child, the crucifixion and the Last Supper are generally not thought of as Jewish subjects, or as the stuff of Jewish art. The Jesus narrative was used to invoke hatred of Jews for centuries; some Jews interpret the Hebrew name for Jesus, yeshu, as an acronym for y’mach sh’mo u’zichro, or let his name and memory be obliterated.

But in this groundbreaking and utterly fascinating exhibit, Jesus is certainly not obliterated; instead, Jesus is used to symbolize the suffering and powerlessness of Jews in the Holocaust; Palestinians in both intifadas; Mizrachi Jewish refugees housed in ma’abarot, or temporary camps, in 1950s Israel, after being expelled from Arab countries; the disabled in Israeli society; Israeli soldiers sent to die in war; and in one of the most haunting pieces, the personal suffering of a major Israeli artist who lost his wife in childbirth, and their daughter three years later, and who painted himself as Jesus and then locked the painting in a cabinet. The painting was found a year after the artist’s death.

The location of this exhibit is a key part of its power — and this can be seen in the inclusion of works that draw parallels between the return to the land of Israel after thousands of years of exile, and the Jesus story, which promises resurrection. Though the exhibit defines itself as “Israeli art,” it opens with a giant 19th-century painting painted by Maurycy Gottlieb in Poland in 1878-9 titled “Christ Teaching in Capernaum,” usually on view at the National Museum of Warsaw, along with two striking Marc Chagall paintings; Chagall wasn’t exactly “Israeli,” though he and Gottlieb were both deeply Jewish artists.

The exhibit asserts in Hebrew that Gottlieb’s Jesus is “the heir to the prophets,” but the English omits that. “Gottlieb’s approach clearly derives from the Jewish enlightenment view that Jesus was a great ethical leader who never intended to abandon his religion,” the English reads. What is most intriguing, however, is Gottlieb’s own comment, which seems to indicate that he saw both Jews and Poles as Jesus figures. “How deeply do I wish to eradicate all the prejudices against my people — and to bring peace between the Poles and the Jews, for the history of both peoples is a chronicle of grief and anguish!”

Next comes Chagall, who unlike Gottlieb, lived during the Holocaust. The exhibit helpfully explains that Pope Francis named Chagall’s “White Crucifixion” as his favorite painting. Chagall probably played the most important role in transforming Jesus into a symbol of Jewish suffering; his “The Crucified,” painted in 1944, portrays Jews — not Jesus — as the crucified. Chagall, who grew up in a Jewishly observant home but saw plenty of Christian art in the museums of Europe, also felt entirely comfortable mixing Jewish and Christian imagery, such as in “The Crucifixion on Yellow,” painted in 1943, where Jesus appears with a Torah. Chagall even wrote a poem composed during the war which reads: “A Jew passes with the face of Christ/ He cries: calamity is upon us.”

This idea of the Jew as Jesus reaches a horrifying height in a woodcut from the “6,000,0001” series by Moshe Hoffman. In it, an emaciated Jesus is taken off the cross by a soldier with a rifle — presumably a Nazi — and forced to join the line of Jews in a death camp, carrying sacks, en route to extermination. It is a must-see.

But this exhibit constantly seeks out complexity, and shows how interpretations of Jesus have changed over recent decades. One of the most striking works here is a 1973 series titled Via Dolorosa by the Israeli performance artist Motti Mizrachi. Handicapped from birth, Mizrachi retraced Jesus’s trip to the cross through Jerusalem with a large photograph of himself and a sign on his back. The idea was to dramatize the powerlessness of weak elements in Israeli society, such as the disabled. The Hebrew wall text claims that the Black Panther movement of the 1970s influenced the series, but the English merely refers to generalized “liberation movements.” (I really wanted to know more about the Black Panthers.) The bearded, black-and-white photo of the sullen artist bears some resemblance to newspaper mug shots of terrorists; questions of terror, resistance, martyrdom, and justice constantly reverberate here.

Many artists here portray Israeli young men, sent to die in war, as Jesus. A striking untitled 1999 photograph by Adi Nes, featuring Israeli soldiers eating a meal, is staged in a very similar way to Leonardo da Vinci’s “Last Supper” (1495-8), suggesting that this may indeed be the young soldiers’ last meal. Here, the Hebrew wall text again diverges from the English; the Hebrew refers to milchemot shav, or “pointless wars,” whereas the English has “a geopolitical constellation over which they have no control.” For those with Biblical familiarity, the phrase milchemot shav can recall nevuot shav, or false prophecies. (Ezekiel 13:8 is one example.)

Another piece that suggests that Israeli soldiers are sent to be crucified is Igael Tumarkin’s “Mita Meshuna,” which means both “strange bed” and “strange death.” The expression originates from the Talmud, where it means an unnatural or extremely painful death, and the piece is hard to look at. “Mita Meshuna” features a partly opened military cot, arranged in the form of a cross, with the English words Mita Meshuna placed above a blue-and-white cloth that might be an Israeli flag. It was made in response to the first Lebanon War, which had heavy casualties. The soldier, Tumarkin suggests, has been sacrificed by society — sent to a painful death.

Many works here place Palestinians in the Jesus narrative. A gelatin silver print by Misha Kirshner depicts a Palestinian woman who gave birth while she was in detention arranged in the pose of a Madonna and child. It’s titled “Aisha el-Kord, Khan Yunis Refugee Camp, 1988,” and the baby is wrapped in what could be a tallit, or Jewish prayer shawl. It’s an interesting contrast to a 1952 piece by Naftali Bezem titled “Mother and Child (Madonna of the Transit Camp), featuring an Arab-Jewish woman and her child in a similar pose; discrimination against Mizrachi Jews, or those from Arab-speaking lands, continues to be a major issue in Israeli society.

Another example of the Palestinian-as-Jesus interpretation is “Gush Katif,” 2001, a 2001 photograph by Pavel Wolberg, a Russian-born Israeli, in which a Palestinian young man lies on the ground, barefoot, hands outstretched, his body arranged into a cross formation; he is probably already dead as a crowd gathers and a woman passes by. (Gush Katif was a bloc of seventeen Israeli settlements; the Israeli Army destroyed the settlements and removed the occupants from their homes as part of the unilateral disengagement from Gaza in 2005; Gaza is now administered by Hamas.)

Other striking works here mix ancient Jewish and Christian ideas with Israeli history—like a monumental series of paintings by Moshe Gershuni about the soldiers who fought to conquer the road to Jerusalem in the 1948 War of Independence, titled “Hai Cyclamens” and painted in 1984, featuring the Hebrew words ha’soleach le’kol avonoteinu,” or “he who forgives all our sins,” which comes from Psalms 103-4. Cyclamens, or rakafot in Hebrew, are also a reference to Chaim Gouri’s poem “Bab el Wad,” about the bloody battle for the road to Jerusalem; the poem became an iconic Hebrew song. As for Bab el Wad itself, it means “gate to the valley” in Arabic; the spot is known in Hebrew as Sha’ar Hagay, which has the same meaning.

Unfortunately, the Bab el Wad reference does not make it into the English, but the explanation that cyclamens often refer to Israeli soldiers, and that “hai” means life, does. (Yes, it’s spelled that way by the museum.) There is some explanation about Gershuni’s multiple themes: Judaism, Israeliness, homosexuality, and Christianity.

The catalogue by curator Amitai Mendelsohn is currently being translated into English, and it is my hope that it will include as many of the references to Israeli history and Jewish culture as possible, so that readers of all backgrounds will be able to access the multiple layers of this one-of-a-kind exhibit. And on a practical note, the Israel Museum offers half-price tickets for those who return to the museum within three months; this challenging exhibit probably requires a “second coming.”