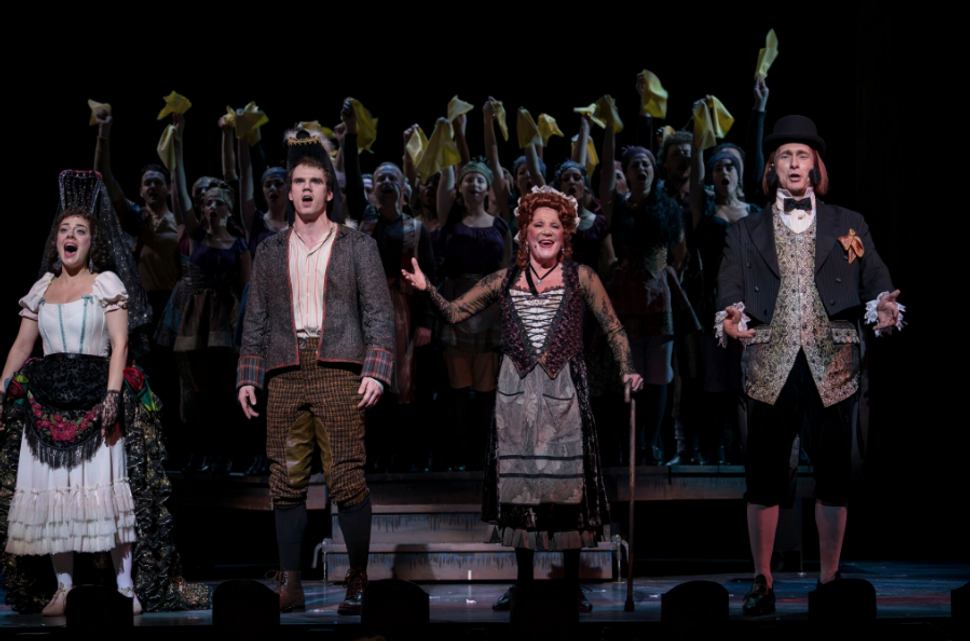 Candide might have been an idiot. But the New York City Opera was no fool to stage the operetta, which closed on Sunday after a two-week run.

Voltaire’s novella is well suited to light opera, a madcap satire on 18th century Europe. And the work of composer Leonard Bernstein, librettist Hugh Wheeler, producer Harold Prince and lyricists Dorothy Parker, Stephen Sondheim and Richard Wilbur (among others) seems as fresh and fun as ever.

The operetta tracks close to the plot of the novella. The title character (Jay Armstrong Johnson) knows a gentle childhood as the ward of the Count of Westphalia. Raised alongside his legitimate cousins, he learns at the feet of Dr. Pangloss (Gregg Edelman), the court tutor. And that wise intellect preaches optimism and practices “natural philosophy” (Voltaire’s words!) with the Countess’ maid, Paquette (Jessice Tyler Wright).

Candide tries out the same experiment on Cunégonde (Meghan Picerno), and that gets him expelled from the castle. He wanders the earth — making stops in Portugal, the New World and the Ottoman Empire — in a quest to be reunited with her. Meanwhile, the Westphalian grandees have been dispossessed of their domain by the Bulgarians. At the end, the happy couple, Cunégonde’s brother Maximilian (Keith Phares) and an old woman (Linda Lavin) settle down on a farm.

“Candide” was a delight for the eyes and ears in its present iteration. Clarke Dunham appointed the set in dark and gaudy colors, with “Dr. Voltaire’s Candide” written in “Olde Tyme” font above the stage. It was reminiscent of a turn-of-the century town fair, where the salesman has come to hawk his magic elixir. That anticipated an absence of realism, as characters mimed important movements and used set elements (e.g., boats, rivers, mountains) that lacked the barest artifice.

As for the singing and acting, Edelman’s Pangloss came across as wooden. But Johnson brought Candide to life as quixotic hero and luftmensch. Picerno carried the show with a haunting performance of Cunégonde’s signature aria, “Glitter and Be Gay.” And Lavin charmed in her role as the “Old Lady,” her character dispensing the savoir-vivre she’s acquired the hard way.

For the most part, the emotional highs arrived in the operetta’s second act ensembles, “Auto-da-Fé (What a Day),” “Bon Voyage” and “Make Our Garden Grow.” It was unfortunate to hear them occasionally marred by the venue’s acoustics, which sometimes transformed harmony into cacophony.

Voltaire presents a conundrum to the Jewish audience, and “Candide” is no exception. The philosophe ripped on believers in general, but proved especially harsh toward Jews. Arthur Hertzberg, the late historian and rabbi, identified him as an originator of modern anti-Semitism, claiming that Voltaire framed his dislike for Jews in racial, as well as religious terms.

Voltaire described in the novella a deal between Lisbon’s Grand Inquisitor and a Jewish merchant to divide Cunégonde’s sexual favors. While he rendered them both as rapacious and ridiculous, the extra animus for Jews shows forth in the text. He caricatured Don Issachar as “the most choleric Hebrew that had ever been seen in Israel since the Captivity in Babylon.” Voltaire’s Jew also manifests a deep hatred of Christians, insulting Cunégonde as a “bitch of a Galilean.”

The operetta’s creators and stagers (many of them Jews) opted to even out that treatment. The merchant and inquisitor are rotund and lecherous in equal measure. Cunégonde bears a cross and Star of David around her neck in a sign of dual ownership. Who’s to say if ethnic solidarity or commercial needs motivated that decision? It seems worth noting, no matter.

Candide’s hardships might be interpreted as a metaphor for the troubles of the New York City Opera itself, recently emerged from bankruptcy after folding three years ago, following leadership shuffles and a move from its perch at Lincoln Center. Now ensconced there once more (in the Rose Theater), the company has produced old favorites, from Giacomo Puccini’s “Tosca” last January to a double-bill of Ruggero Leoncavallo’s “Pugliacci” and Sergei Rachmaninoff’s “Aleko” this past September.

Reviewing the latter of those performances, The New York Times noted “signs of rebirth” for the company, offering qualified praise for “a strong, if not exceptional” turn. This production largely confirms that sense of (dare one say it!) cautious optimism, mixed with some apprehension. One imagines the garden of “Candide” and fellows, like the fortunes of the New York City Opera, as tentative, with the green shoots peering out amid a lingering frost.

Most of these reservations come from the choice to stage “Candide” at all. One has to ask what lies underneath the offbeat humor and sing-along numbers of the operetta. “Candide” in Voltaire’s time took a hatchet to the received norms of Europe’s religious and political establishment, mocking ideas of noble succession, martial virtue and obedience to faith. Those values are now mostly discredited, at least one assumes for the audience at Lincoln Center.

Voltaire’s comedy retains little bite, aside from its thematic critique of optimism. But even that, ribbing mathematician Gottfried Leibniz, translates poorly in the present context. We have already seen illusions of progress shattered over the past few months. And that leaves one puzzling over the production’s “so what?”

This reviewer might be wrong to demand the operetta “shoot bullets,” as Clifford Odets might have wanted. Perhaps one should celebrate “Candide” (both the novella and production) as a work that’s lost its polemical value while maintaining its luster as farce, a comedy for comedy’s sake. But its humor derives from its social and political messages. If these have diminished, it seems wiser to read “Candide” as a historical document, instead of watching it as entertainment.

But for this reviewer’s huffing and puffing, it was still a fun two hours at the theater, thanks in large part to Leonard Bernstein’s composing and the cast’s singing. It’s not the best possible operetta in the best of all possible worlds. But one could have done a lot worse.