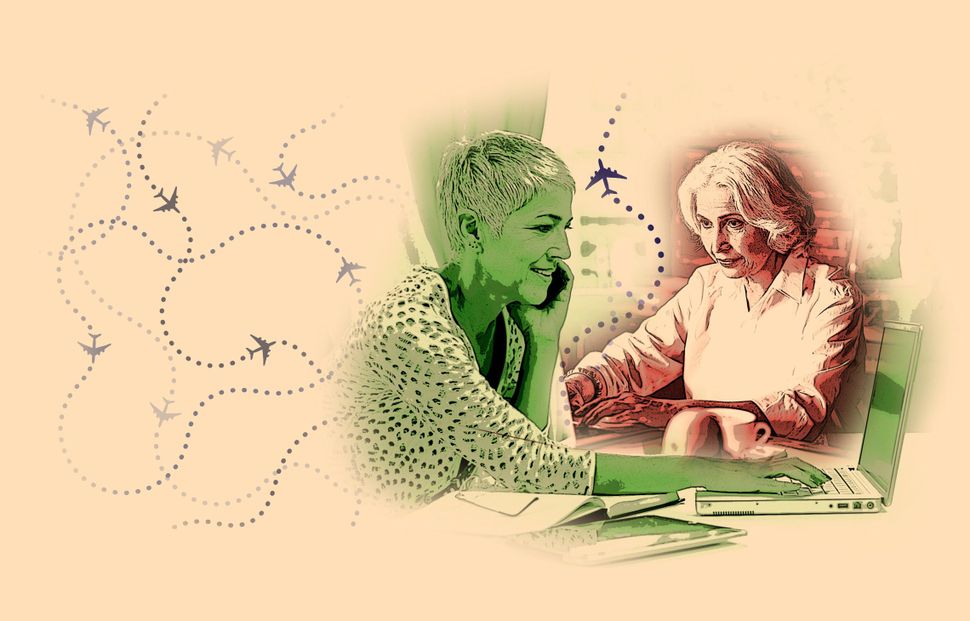 ‘Needing brunch places in downtown Manhattan” was the posting I chose to respond to when looking through the online travel forum. It was payback time, my turn to help someone else. I was grateful for the suggestions I’d received from others when searching for a Mexican beach resort that wouldn’t require packing Imodium.

To figure out which restaurants to recommend, I emailed the poster to ask, “Do you want casual, or is this a special occasion?”

Roberta, as she signed her email, explained she was coming in from and taking out a large group of relatives. “If they were someone else’s family, you might call them ‘discerning,’” she said. “But when they’re yours, you’d describe them as ‘impossible.’ My cousin sees ‘no substitution’ on a menu as a challenge to her negotiation skills. Two uncles refuse to wear hearing aids, so we will turn up the volume at the table, if not the entire restaurant. Where should I go with this group?”

“I think I saw your screen name on the France board,” she wrote back. “My husband and I had been planning to go, but I was diagnosed with breast cancer and need treatment so we’re doing this instead.”

Though fearful of overstepping boundaries, it seemed important, so I said: “A close friend was just tested for the BRCA2 gene mutation. It affects mostly Ashkenazi Jews. Forgive me, as I have no idea if this applies to you, but if so, I want to be sure you’re aware of it.”

She immediately answered to say she was Jewish and had already survived ovarian cancer. Neither of us had been shopping for a new friend, but our bonding was clearly bashert, intended. When I said her relatives sounded as if they could play gin with the characters in “The Family Markowitz” and recommended that she pick up Allegra Goodman’s hilarious novel, she was shocked, telling me she’d bought it the day before. It didn’t matter that our game of Jewish geography was unproductive; we moved on to share feelings about Philip Roth, Mel Brooks and Woody Allen, then rhapsodized over the blinis at the old Russian Tea Room, herring at Russ & Daughters, and corned beef on both coasts.

That I couldn’t have picked Roberta out of a lineup of foodies in her favorite Napa Valley restaurant in no way diminished the warmth I felt. I was always eager to hear what she was doing, and she seemed to genuinely care about my husband and son. If days lapsed between e-mails, we’d worry: “Are you okay? Where are you?” She was as upbeat when writing about blood tests and organ scans as she was when reporting on outings with friends or sending recipes for bean dip and short ribs. The fact that we shared no community created an intimacy more typical of a clandestine affair than of a friendship between two women.

A few weeks before Roberta was scheduled to have a stem cell transplant, she was coming to New York, the trip that had prompted her restaurant search. I asked if she’d have a free hour so that we could meet. Our intense preoccupation with eating led me to expect that she would be obese, or if not, then surely zaftig. The woman who greeted me at her midtown hotel was attractive, chic in velvet pants and a smashing silk blouse — gray, the color I knew to be her favorite. What did surprise me was that she was thin enough for the shirt to be tucked in. In unison we blurted out, “You’re thin!!!” Then we burst out laughing, realizing we’d both made the same assumption.

The only nod to Roberta’s illness was a turban, which she yanked off, joking about her cropped, “chemo hair.” It took at most 30 seconds for us to feel relaxed. Her husband was cordial, but I suspected he’d been wary of my visit and had probably locked up their valuables in the hotel safe.

The meeting ended what had been an out-of-body friendship, two people who didn’t know what the other looked or sounded like. Our online chatting resumed, stopping for the three weeks she was having a stem cell procedure. I’d taken her phone number and called her husband, who answered my question about the prognosis by saying, “We don’t yet know what the effects will be, but we’re hopeful.”

Roberta returned home, and despite bouts of fatigue and some dizziness, she was pleased that she had enough energy to run around and buy a present for her mother’s birthday, visit with her stepsons and devour a 2-pound, center-cut smoked salmon her friends had brought from Seattle. She expressed no concerns about her health, except to joke, “If there’s a recurrence, I’m making a trip to Provence.”

When a few days passed with no emails, I remembered her mentioning she would be going on a business trip. Opening the newspaper, I was stunned to see her name on the obituary page. At the age of 51, she’d died of cardiac arrest. I was overwhelmed by all the stages of grief — shock, incredulity, anger, an overwhelming sense of loss and sadness. There was no one to commiserate with. However much we meant to each other, we hadn’t been a part of each other’s real life. Forced to create my own shiva, I came up with what felt appropriate. I smeared a hefty amount of cream cheese on a fresh bagel, topping it with slices of Nova, and read through every one of our emails, which, luckily, I’d saved. The ending was as unusual as our unconventional friendship had been.

Sybil Adelman Sage is a comedy writer who has worked on “The Bob Newhart Show” and “Northern Exposure.”