If Trump Eliminates The National Endowment For the Arts, Artists Will Suffer — And So Will the Public 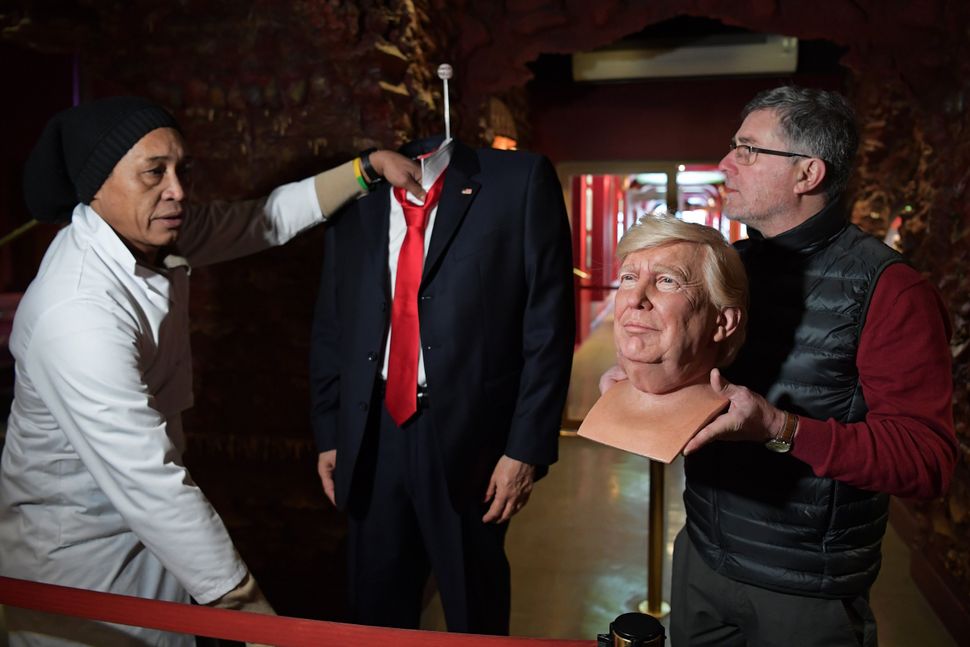 The march towards President-elect Donald J. Trump’s inauguration has been a slow one, each day bringing a new outburst, a new incompetent cabinet pick, or a new rambling interview.

For those unfamiliar with the NEH and NEA, both organizations are independent federal agencies that award money to artists, authors, cultural institutions, museums, scholars, radio stations, and just about any other person or organization that might contribute to the cultural wealth of the country.

That’s all well and good, you might say, but our country is in debt! The budget! Deficit! Certainly, in times of economic austerity, the arts, no matter how precious, must be the first to go – you can’t eat a Mapplethorpe, after all. So just how much of the federal budget did these gluttonous behemoths of government waste take up last year? A combined .006%. Yes, you read that right: .006%.

To accompany the number, The Washington Post published a helpful pie chart, or, as they write, “sort of a pie chart. If you were at Thanksgiving and demanded a slice of pecan pie proportionate to 2016 NEA spending relative to the federal budget, you’d end up with a piece of pie that would need to be sliced off with a finely-tuned laser.”

So why, of all the federal programs, would the NEA and NEH find themselves on the chopping block? There’s the long history of controversial grants; in 1989, the Senate attempted to destroy the NEA in response to their funding of Andres Serrano’s “Piss Christ,” a (brilliant) work of art in which Serrano created a photograph of a crucifix submerged in a jar of his own urine. There’s also the hardline conservative sentiment that all “unnecessary” government spending ought to be cut; that some of this spending happens to fund the arts is, in their thinking, immaterial. But Trump is a different kind of President-elect, and in his shadow this proposed extermination of two of our largest arts and culture funding programs seems different, that is, worse.

To be sure, both the conservative fiscal ideology and moralizing anti-art justifications are at play. One of Trump’s most successful arguments during the campaign was that he was going to come to Washington not as a politician, but as a businessman. The only way we could end reduce the federal deficit and actually get things done, he argued, was to abandon the political games and bring a hard-nosed business ethos to issues both domestic and international.

Businessmen, as Trump would certainly confirm, are by-and-large beholden not to ideological concerns, but to profit. Insofar as the acquisition of an expensive work of art to adorn the lobby of Trump Tower might imbue the building with a sense of sophistication, thus making it more attractive to potential clients, then the work of art is a good investment. But as soon as tastes change, or the art no longer seems to fulfill its function, then it becomes disposable, a waste of space. The NEA and NEH take up an infinitesimal portion of the annual budget, but, from a business perspective, they have no apparent function. The value that they generate is abstract, and thus cannot be quantified. The natural consequence of government-as-business is the dissolution of those programs that cannot justify themselves in terms of the bottom line.

That the two agencies should be so often singled out by conservatives, despite their budgetary insignificance, however, speaks to their status as a perceived enemy of the right, and specifically to Trump. Artists have been outspoken critics of Trump since the beginning of his campaign, and their work in combatting his presidency is only just beginning (already we’ve seen the #J20 Strike, the RESIST! comics, the Writers Resist Rally, and the Ghostlight Project).

As Omarosa Manigualt to the President and director of communications for the Office of Public Liaison” stated just after the election, “Mr. Trump has a long memory,” and the campaign was keeping a list of people who did not support the then-candidate’s run. The suggestion was that the list was more than a simple clerical matter –- it was a threat of retribution. And it appears as if they have begun to follow through.

There’s an even more sinister angle to all of this, however. In his essay “Towards a Semiological Guerrilla Warfare,” the always incisive, always prescient Umberto Eco writes “The day after the fall of Khrushchev, the editors of Pravda, Izvestiia, the heads of the radio and television were replaced; the army wasn’t called out. Today a country belongs to the person who controls communications.”

Our news media depends upon the government for information and access, and in that way it can be argued that every president enjoys a de-facto control over the message. Insofar as media outlets retain relative autonomy in terms of their staff and editorial decisions, however, they cannot be brought under the direct control of the White House. Trump cannot (yet) start replacing the heads of say, The New York Times or CNN, nor can he — at this point — control the way his message is received. (One exception: the rise of the professional Putin troll shows us that this is not so far fetched an idea.)

So what is the next best option for someone who seeks to control communication? Destroy the message altogether. The arts are not the media -– they have always spoken to power in a way that mass media cannot. If you cannot control the arts, cancel them. If works like “Piss Christ” seem gratuitous in their provocations, it is only because in their gratuity they bludgeon us into reflection and, ideally, into action.

The NEH and NEA are two of our most important cultural funding institutions, without which projects and works like Live From the Lincoln Center, the Sundance Film Festival, The Mingus Project, The Perseus Digital Library, the Humanities Open Book Program, the poetry of W.S. Merwin, and the writing of Isaac Bashevis Singer — the negative impact this will have on the Jewish world seems manifestly obvious — might not have been possible. If he follows through on cancelling the funding of the two agencies, and by proxy, kneepcapping the art and artistic programs that they help create, Trump will have removed a crucial bulwark of speech against his administration, and will have positioned himself one step closer to the media control that Umberto Eco (rightly, I think) deems the necessary precursor to takeover.

The American cultural institutions are Trump’s enemies in both explicit and implicit ways. The explicit is obvious, the implicit less so. Trump was so successful as a presidential candidate because of his penchant for media spectacle, for his masterfully tasteless aesthetics, and for his crass marathon speech performances. In other words, Trump employed the tactics of art to win the election. I’m only partially kidding when I say that Trump may be our first Dada President. (Tristan Tzara, one of the movement’s founding fathers, seems to call out from behind the “Make America Great Again” hat: “We are like a raging wind that rips up the clothes of clouds and prayers, we are preparing the great spectacle of disaster, conflagration and decomposition”.)

The proposed dissolution of the NEA and NEH is a signal from Trump: This town is not big enough for the both of us.

Insofar as Trump desires to control the message of the media — not just the news, but the arts as well — he must become the media’s message, and he achieves this through spectacle. (At this effort, he has already enjoyed unprecedented — unpresidented? — success.) Spectacle is dependent upon novelty, upon motion and eager eyes. Spectacle cannot tolerate distraction. Anything that might occupy a similar prominence must be removed if it cannot be made part of the show.

The NEA and NEH, as bastions of funding for the so-called “high arts,” are easy targets in this war of aesthetic removal. A study by the NEA, we can see that while attendance to “core arts events” has stagnated since 2012, “the AABS shows a drop in the share of adults reading literature” from 47% to 43.1%. Due to their declining or stagnating popularity, the removal of arts institutions is less likely to generate public outcry than the removal of their mass media counterparts. This does not mean that seemingly innocuous pop-culture is safe. If we’ve learned anything this past year, it’s that there’s plenty wisdom to that old children’s story: if you give a mouse a cookie — or a reality TV star a primary — well, he’ll inevitably want a glass of milk.

To be clear, there is a legitimate criticism to be made about the coupling of state and art. Art’s power lies in its autonomy, and it’s arguable that the necessity of state funds compromises this autonomy and mitigates art’s radical potential. (Another ever present worry: what were to happen if, instead of destroying the two agencies, Trump — or any President — turned them into programs of state propaganda?) But, thus far, the NEH and NEA have been forces for public and artistic good. And in a time that is increasingly anti-intellectual, anti-knowledge, anti-art, and anti-science, we need the NEH and NEA now more than ever.

If Trump Eliminates The National Endowment For the Arts, Artists Will Suffer — And So Will the Public