One of the first things viewers see at the U.S. Holocaust Memorial Museum’s traveling exhibition “State of Deception: The Power of Nazi Propaganda,” which recently opened at the U.N., is a quote from 1924 by Adolf Hitler: “Propaganda is a truly terrible weapon in the hands of an expert.” And, as the exhibition will show, the Nazis, primarily Joseph Goebbels, Hitler and Julius Streicher, were true masters of the form. We are currently experiencing a moment in which the lessons of Nazi Germany seem to call to us stronger than ever, but this exhibit is of limited instructiveness. For our time, propaganda is not the domain of the master, rather, propaganda relies precisely upon the fact that there are no masters anymore.

In the exhibition, we are guided through the rise and fall of the Third Reich, with pieces of propaganda from each time period accompanying the displays. We’re given the pieces that we have come to expect from such an exhibition – the heroic German worker, the disgusting miserly Jew (both as representative of global communism and global capitalism), the Fürher worship, and the coming Allied horde.

But we are also given some rare artifacts of Nazi history. Two items in particular stand out – one, a photo of a stage during a large Nazi rally. The photographer used a low shutter speed for the photograph and as a result, all the moving faces and bodies blur, creating a ghastly, spectral effect. Hitler’s visage is somehow more evil when it is concealed behind a motion blur. His presence is more commanding, more arrestingly horrible when we know it’s him we’re looking at without really knowing. 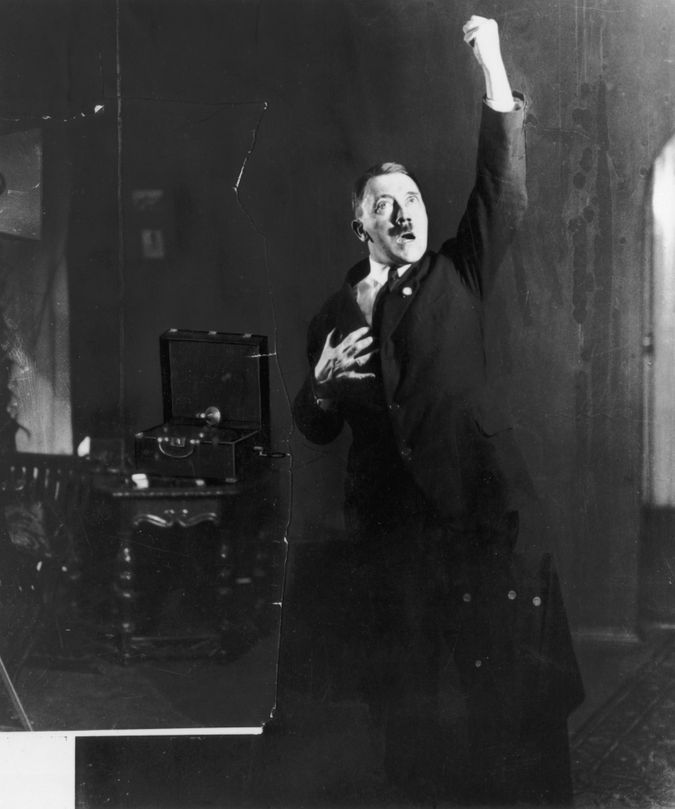 The second item is a series of four photographs of Hitler, alone in a room, practicing his mannerisms. The photos, taken in 1927 by Heinrich Hoffman, look like stills from an audition reel – in an alternate timeline, a bad silent film actor might have sent these to D.W. Griffith. The photographs, in addition to their uncanniness and outrageous silliness, are telling. They tell us that, despite the somewhat slapdash nature of their ideology, nothing was accidental when it came to Nazi aesthetics. No gesture, no flag, no rally, no film was made without the express intent of cultivating the Nazi image. These were men who knew dearly the importance of a hermetically sealed aesthetic. For the Nazis to attain such a degree of control over their subjects, their system needed to be totalizing – domination came from mass-proliferation, yes, but also from consistency of message (message of course is more than just the words on the page).

While the exhibition serves as an excellent primer on the history of the Third Reich, it falls short as an exploration of the nature of propaganda. The curators provide explanations of the pieces of propaganda, but, rather than any formal analysis of why it worked and why it was constructed in this fashion, we are simply told that it was successful. Because the exhibition was curated by the USHMM, it is likely that historical education was their primary mission. In this regard they have succeeded, and the exhibition feels as relevant as ever. But, given our current landscape of “fake news” and White House lies, an investigation into the structure of propaganda would have been welcome as well.

It is tempting to look at the exhibition and think – we are going through precisely the same thing. Not least because each propaganda poster is reproduced in English as well as German to chilling effect. Not least because certain Breitbart columns look as if they were written by Julius Striecher himself (Streicher gave a speech in 1924 sold by the USHMM suggests, we seem to be sliding into a distinctly American Fascism.

But, despite all of these similarities, Trump is not Hitler, and this is not the world of 1933. It may be bad, and it may look dire, but in the Nazis we saw a singular evil, and we must be extremely careful in making direct, one to one comparisons. Aside from certain overwrought analogies between Trump’s America and Hitler’s Germany (again, some rumination on similarities are fruitful and accurate, but a direct analogy is misguided and false), our propaganda situation, as the last section of the exhibit points out, is quite different.

Part of what made the Nazis so successful at their propaganda efforts is that they controlled all media inside the Reich. They were able to cultivate their singular aesthetic because there were no competing outlets that could taint its purity. The oppressive singularity of Nazi media created a totalizing world view of which there was little recourse for escape (of course, this was a greater problem for the youth than the adults, who already had years of experience with which to arm themselves against Nazi lies – that they didn’t is a failure of both the intellect and the will).

With the internet however, we have precisely the opposite scenario – not the oppression of one media outlet, but the anxiety of too many.

In a 1974 interview recently published in the New York Review of Books, Hannah Arendt wrote the following: “The moment we no longer have a free press, anything can happen. What makes it possible for a totalitarian or any other dictatorship to rule is that people are not informed; how can you have an opinion if you are not informed? If everybody always lies to you, the consequence is not that you believe the lies, but rather that nobody believes anything any longer.” Arendt was speaking about a Nazi-like media takeover, but her words are more applicable to the current media landscape.

A government that seeks to undermine the very notion of Truth would be ill advised to appeal to Truth at all. In other words, short of eradicating the free press altogether, a government that seeks to undermine the public trust in the media, would be misguided to try to create its own sealed, consistent aesthetic. Simply adding one voice (an easily debunked voice) to the void does not advance this goal –truly successful state propaganda (in the U.S. at least) seeks to do more than just posit a truth. Rather, our contemporary state propagandist does not appeal to Truth at all, but seeks to remove its foundations, seeks to attack the notion of Truth as such. The contemporary state propagandist is not a master in the mold of Goebbels. No, the contemporary state propagandist is a dilettante, but a loud one, a persistent one. It matters less now whether a state propaganda piece is itself persuasive than whether it is equally as debased as any competing voice – thus, when Infowars comes into conflict with The Washington Post, an American does not know who to trust.

In real world terms: every media outlet, regardless of its integrity, will get some stories wrong. What we have now is a president who consistently attacks media outlets, not just individual stories as “fake news.” (Bias is not the same as a lie, and has little to do with the whole “fake news” outcry – impartiality is different from objectivity. An impartial source would report both sides of the flat earth argument, an objective one, biased in favor of the truth, would simply present the fact that the earth is round). The consistent undermining of the press does not create a scenario in which one source can become dominant, but rather a situation in which all sources become level, which is what truly brings us to Arendt’s reality. Everybody is not always lying to you, but if you believe that they are, the result is the same. When, as Arednt writes, “nobody believes anything any longer” then everything, no matter how ridiculous, might come to be believed.

“State of Deception: The Power of Nazi Propaganda” is on view at the UN Visitor’s Section until March 5th, 2017.