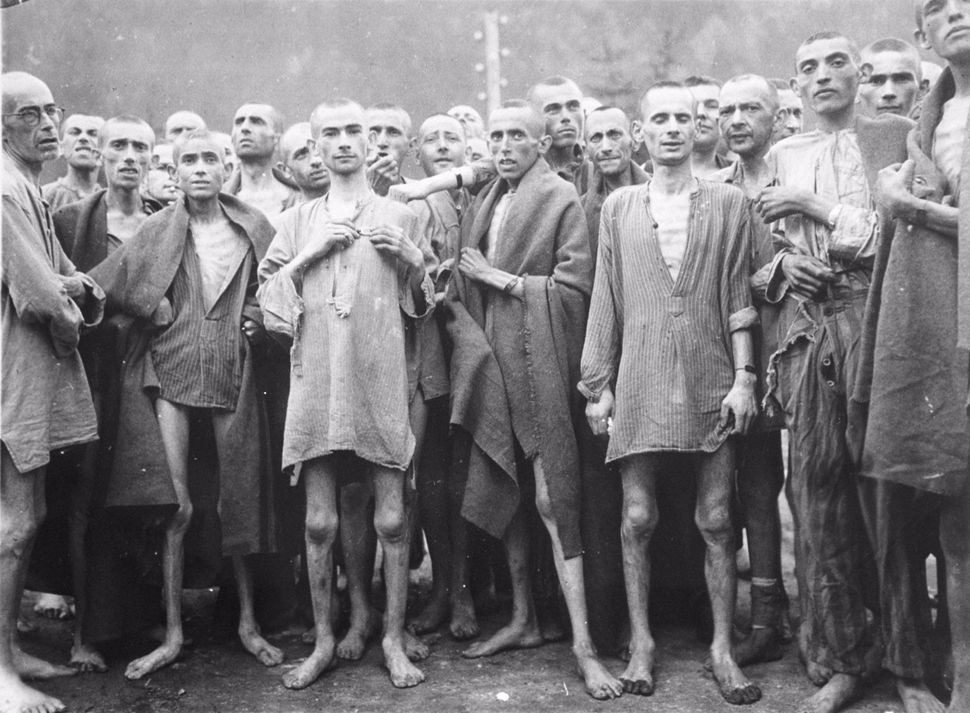 January 27 is International Holocaust Remembrance Day. But “Holocaust Remembrance” is not as clear cut a phrase as it might seem. In Poland, the government is suing Holocaust scholar Jan Gross over his work on the country’s role in the genocide. In Lithuania, another blood-soaked nation that refuses to reckon with its past, we see memorials to the Holocaust defaced with pro-Nazi graffiti. On the internet, we’ve seen the recent resurgence of the Nazi sympathizing, fascist “alt-right” (they never truly went away, they’ve simply become more vocal). We see that Google, the world’s largest reference source, continues to show Holocaust denial sites as some of the first results for a search about the Holocaust. And now, in the long tradition of Jew-washing and Holocaust denial, we have President Trump’s official Holocaust Remembrance Day statement.

2/2 Puzzling and troubling @WhiteHouse #HolocaustMemorialDay stmt has no mention of Jews. GOP and Dem. presidents have done so in the past. pic.twitter.com/BvZVVoPUSi

“…the depravity and horror inflicted on innocent people by Nazi terror.”

As so many have already noted, Trump’s statement about the Holocaust excludes any mention of its primary victims, the Jews. (Canadian Prime Minister Justin Trudeau, Jew-washed the “Hypercacher” murders in France by referring to the Jewish victims as just a “bunch of folks in a deli in Paris”).

“Innocent people” levels all distinction in terms of victims of the Holocaust. This is not to say that any Holocaust statement ought to focus exclusively on the Jews. Other groups were targeted as well – homosexuals, Roma, the mentally and physically impaired – but the Jews were the occasion for, and primary victims of, “Nazi terror” and any mention of the Holocaust that does not begin with this fact is an assault on their memory. We turn to Ukraine, where the memorial at Babi Yar, the site of a massacre of 33,771 Jews, only commemorates the murder of the “citizens of Kiev.” In the same way that this is not a Holocaust memorial, Trump’s statement is not about the Holocaust.

“I pledge…to ensure that the forces of evil never again defeat the powers of good.”

The irony of his statement should be manifestly obvious to anyone who has followed Trump’s rhetoric. While Putin commits war crimes in Syria (a man whom he has consistently praisedfrom entering the United States (and for a period of at least 120 days, refugees from elsewhere in the world). In his inaugural address Trump invoked the phrase “America First,” harkening back to the isolationist movement of the 1930s. A movement that was decidedly against intervening in World War II, and was decidedly against admitting Jewish refugees. Most famously, the United States (as well as a host of other nations) rejected the St. Louis, a ship of German Jewish refugees fleeing the Nazi regime.

The Syrian civil war is not the Holocaust, and Assad is not Hitler, but they are most certainly “forces of evil.” In the wake of Trump’s policy decisions and isolationist rhetoric, his pledge is empty at best. As the Anne Frank Center asked in a statement issued earlier today, “Have you no decency?”

“Yet, we know that in the darkest hours of humanity, light shines the brightest.”

This is a line of rhetoric by no means restricted to Trump (consider the film “Life is Beautiful” as the most egregious purveyor of this childish nonsense), but it remains misguided and dangerous all the same. The Holocaust had stories of heroism, yes, but the empty, naive cliche about light in the darkness only diminishes the memory of the Holocaust. It is here that the most damage can be done.

The Holocaust was the Götterdämmerung of Enlightenment, the moment when we realized the latent barbarism lurking beneath our culture (as Theodor Adorno and Max Horkheimer would write in “Dialectics of Enlightenment”). It was a break, a cataclysm against which the past and future came to be measured. It was a black hole – a pit which contains light, yes, but from which light cannot escape. We know that those scattered invisible wisps of light exist, but our focus must remain the dark. In our memory of the Holocaust, we must focus on the camps, the mobile killing squads known as the Einsatzgruppen, the collaborators.

It is of the utmost importance that we constantly remind ourselves that this impulse to genocide is ever present, and that this impulse to silence and obedience in the face of atrocity is ever present as well. To do otherwise, to focus on the sparse acts of heroism and kindness (a practice that Poland has recently codified) is, in a sense, Holocaust denial light. We are at risk of using Holocaust Remembrance Day as a pat on the back, as a way to remember the supposed “goodness” of humanity, as a way to indulge in the temptation to imagine ourselves as those scattered heroes of resistance, as opposed to silent bystanders or outspoken collaborators.

Author and Holocaust survivor Jean Amery wrote in his book “At The Mind’s Limit,” “It goes without saying, I believe, that in Auschwitz we did not become better, more human, more humane, and more mature ethically. You do not observe dehumanized man committing his deeds and misdeeds without having all of your notions of inherent human dignity placed in doubt.”

This rhetoric of light is willful blindness, it flies in the face of Amery’s writing. It is the willful refusal to confront the horrible truth that the Holocaust’s lessons are not about the dignity of humanity in the face of evil, but precisely the opposite. We must resist, now more than ever (this statement is uttered every year, and every year it is true), this focus on the light. Focus, perhaps entirely, on the dark so that we might learn of our own baseness, so that we might negatively illumine the darkness of our own time. We honor the memory of those killed, of those who survived not with congratulatory platitudes, but with true, painful, terrible remembrance.