It’s International Holocaust Remembrance Day, and the services of the biggest company in the world are still, in effect, helping neo-Nazis spread their propaganda.

For months, perhaps years, Google Search has been giving Holocaust deniers a tool to spread their abhorrent views to unsuspecting browsers on the web. After a sustained shaming by various organizations (most notably by Carole Cadwalladr at the Guardian) at the end of 2016, Google managed to tweak its algorithm so that the first returned search term for “Did the Holocaust…” was not a neo-Nazi site claiming that the Holocaust didn’t happen.

But this is a cosmetic fix to a particularly narrow search. If, using the private browsing mode so that your browsing history doesn’t influence the results, you type “Is the Holo…,” six of the top 10 returns still deny that the Holocaust took place.

If you search Google Images for “Jew,” you get a bizarre smattering of Nazi icons and caricatures, pictures of Hitler, unflattering pictures of ultra-Orthodox Jews and, of course, Woody Allen. 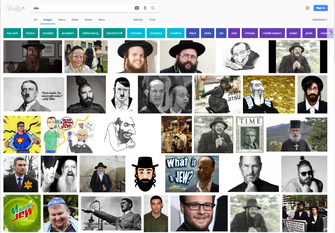 Google argues that it is not making money from these results and that it is improving its search. Presumably, too, Google technicians fear that if they block sites about this topic, they will be pressured to block sites about other topics as well. But this is not about freedom of speech as protected by the First Amendment. This is not even about a successful algorithm. This is Google losing the game of providing useful information to billions, and losing to a tiny — but determined — minority of counter-factual racists.

The history is clear. The numbers of people who believe in denial are tiny (although thanks to Google, perhaps they are growing). But somehow they have gamed and bullied their way into vastly disproportionate significance to Google searchers.

This is the edge case. If mighty Google can’t (or won’t) stop this most heinous of all fake news — denying the murder of 6 million of my co-religionists by a modern Western state, scarcely two generations ago — from being spread through its search engine, what trust can we put in anything that we find through Google?

But Google shapes the worldview of billions so if we can’t trust Google, the bullies have won — to the everlasting shame of Larry Page and Sergey Brin. And, especially on January 27, we have a pretty clear idea of what can happen when viciously anti-Semitic bullies colonize national conversation. 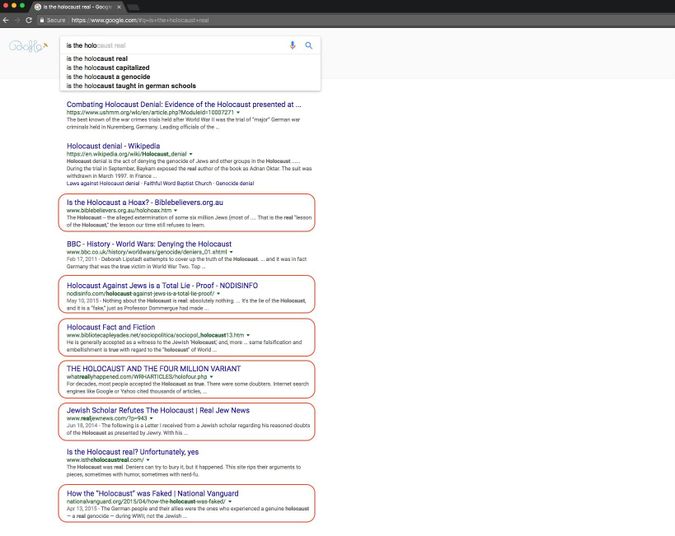