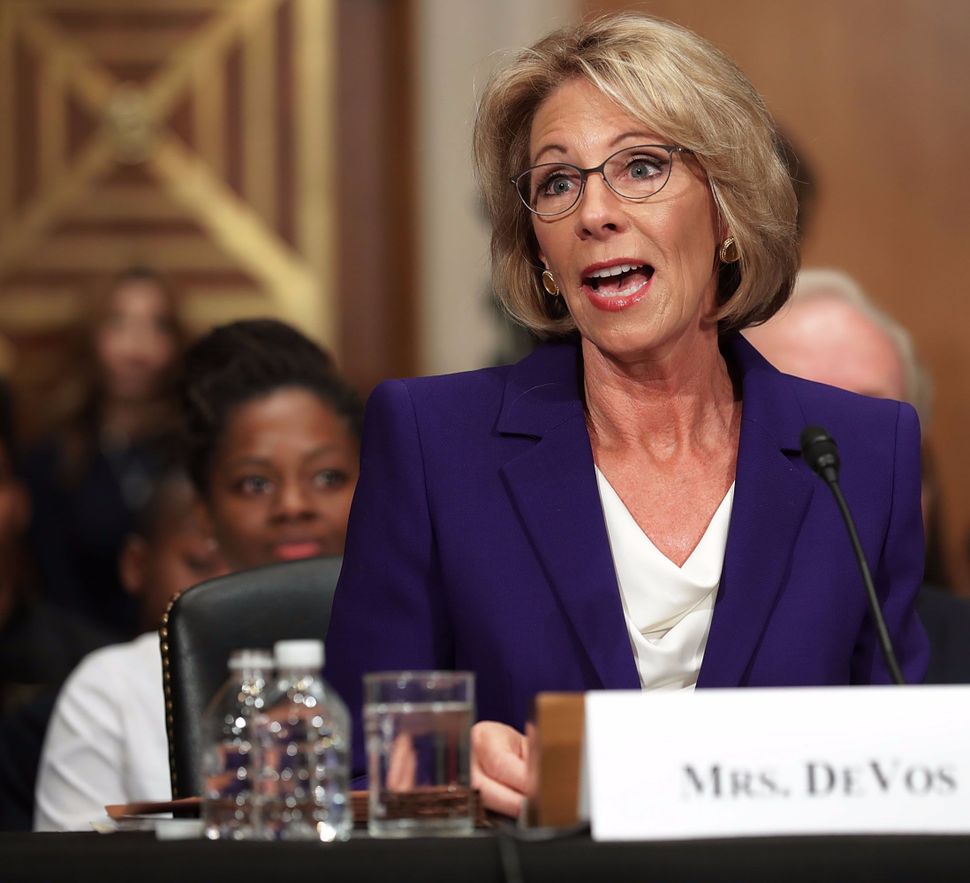 “A sentence in the article, “The Schools Transgender Students Need,” was identical to a sentence found in DeVos’s written response to Congress,” the statement said.

Noting that ASCD, which describes itself as “a global community dedicated to excellence in learning, teaching, and leading,” believes those helming the country’s education system should “serve as role models for students and adhere to the same standards we expect of our kids,” ASCD managing director of communications and public affairs Cameron Brenchley chose to look on the bright side.

“I’m pleased that DeVos chose to read Kahn’s piece in ASCD’s Educational Leadership magazine,” he said, quoted in the statement, “and I hope she walked away not only with a firm understanding of the importance of protecting transgender students in public schools but also a new commitment to ensuring all schools create a climate where students are healthy, safe, and supported.”

Contacted by the Forward on January 31, Kahn said she was unable to comment on the allegations.

The passage in question, as written by Kahn, reads “You — as an educator and an ally — can dramatically shift the school climate to one that is safe, supportive, and inclusive: a place where all students can learn, achieve, and thrive.”

As the Post reported, DeVos wrote a suspiciously similar response to questions on how she would consider the needs of students identifying as lesbian, gay, bisexual and/or transgender, and specifically her attitude towards conflict over whether transgender students should be allowed to use the bathroom that corresponds to their gender identity. “Every student deserves to attend school in a safe, supportive environment where they can learn, achieve and thrive and are not discriminated against,” DeVos wrote. “Period.”

In addition to allegedly plagiarizing Kahn’s essay and a variety of federal statutes and materials from the Education Department, DeVos was also accused of lifting a passage from a news release of President Barack Obama’s administration that announced that administration’s guidelines for schools on serving transgender students. That release was written by Vanita Gupta, then head of the Justice Department’s civil rights division.

Senator Murray was also revealed to have used language from external sources without citing those sources in crafting her questions for DeVos. Her office issued an acknowledgment of that error.

As a reminder, students enrolled in the public education system that DeVos hopes to head face strict penalties for plagiarism. The University of Colorado, for instance, the Boulder law school of which employs Supreme Court nominee Neil Gorsuch as a visiting professor, lists plagiarism as a violation of its student-run Honor Code. Consequences, at their most dire, include expulsion.