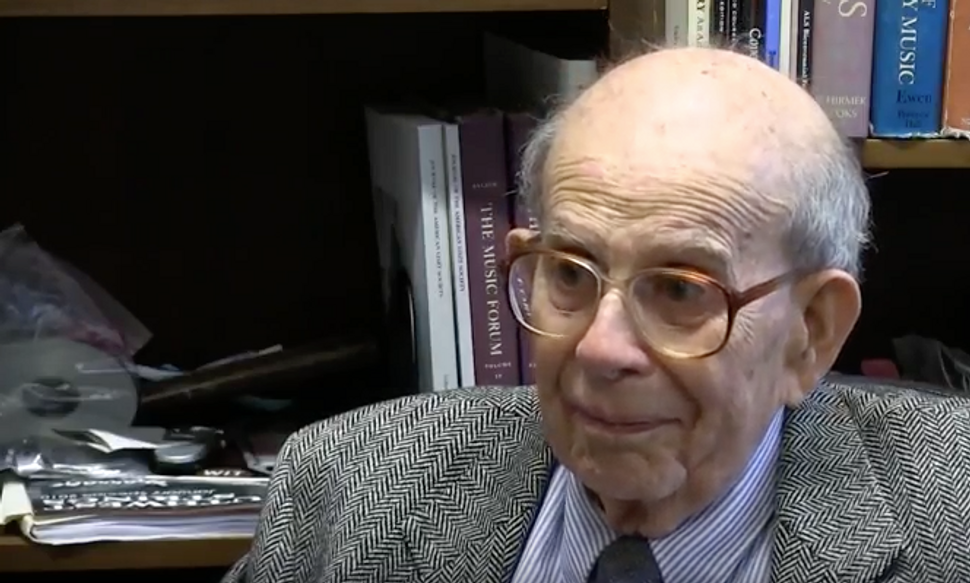 Walter Hautzig’s path out of Nazi-occupied Austria began with a piano his grandfather purchased for his mother, his daughter explained at his funeral this past Thursday. If his mother decided to go with the other option he had given her for a gift — a fur coat — things might have turned out very differently.

As it was, Hautzig — who The New York Times’s Sam Roberts reported passed away from congestive heart failure last Monday at the age of 95 — cultivated a talent for and commitment to the piano that, at age 16, won him an exit visa from Vienna after he auditioned for Emil Hauser, founder of the Budapest String Quartet and director of the Jerusalem Conservatory. (Hautzig learned of the opportunity to play for Hauser, who was bestowing both visas and admission to the Conservatory on the most impressive applicants, from the Jewish newspaper Der Kol (“The Voice”).)

He moved to Jerusalem a month later, leaving his family behind without any idea of what their future might hold; it was months before he received word that, while some of his relatives had been sent to Buchenwald, his parents had escaped to Switzerland, and then to New York.

He joined them there a year and a half after he left Austria. Once in the United States, he studied with the maestro Artur Schnabel — who had previously taught one of his mentors at the Jerusalem Conservatory, Alfred Schroeder — as well as at Philadelphia’s Curtis Institute of Music. As Roberts wrote in an obituary published February 6, Hautzig made his concert debut in the United States in 1938, at age 21, playing Bach, Beethoven and Chopin at Manhattan’s Town Hall.

As Eli Rosenblatt wrote for the Forward in a 2007 profile of Hautzig, the pianist became an artistic diplomat. “Many of his performances were arranged by the U.S. State Department, and he performed in Tokyo, Kabul, Dhaka, Vietnam, Indonesia, Guatemala, Colombia, Guyana and Suriname, among many other locations,” Rosenblatt wrote. “Many times, in some countries, the only people I would play for were diplomats and government officials, not natives,” Hautzig told him.

Recalling a concert he gave with the Berlin Philharmonic in 1960, Hautzig told Rosenblatt, “I walked in, and they gave me a standing ovation immediately. I asked myself, ‘Where was Goring sitting?’”

Hautzig, who served on the faculty of The Peabody Conservatory in Baltimore as a professor of piano between 1960 and 1988, performed well into his later years. Hi wife Esther Hautzig (née Rudomin) passed away in 2009; he is survived by his daughter, Deborah Hautzig, son, David Hautzig, and three grandchildren.