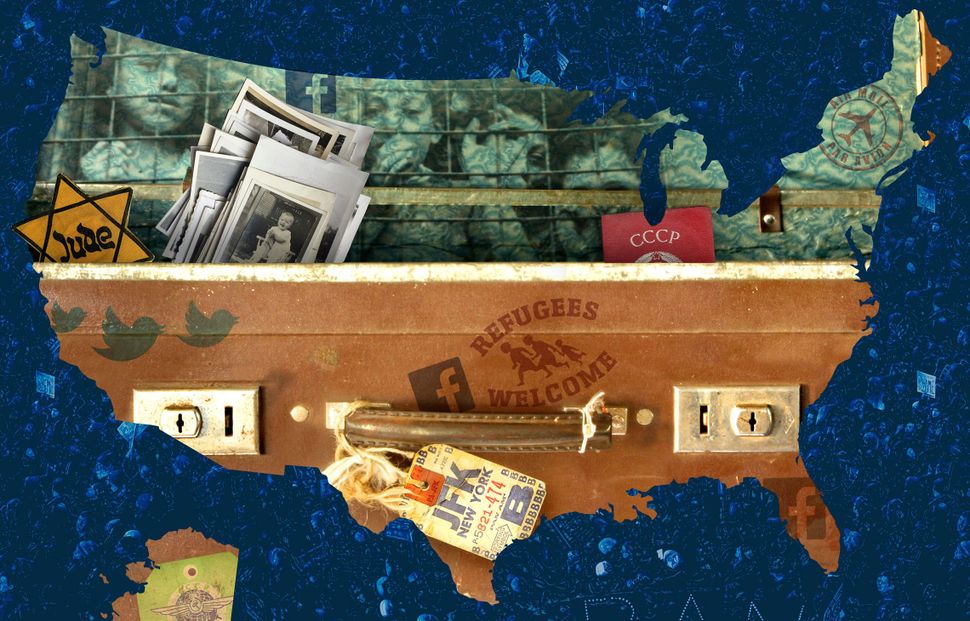 On Friday, January 27, one week after he was sworn in as president, Donald Trump signed an executive order titled “Protecting the Nation From Foreign Terrorist Entry Into the United States.” That order — as you’ve now surely heard — did at least two notable things. First, it suspended the “Issuance of Visas and Other Immigration Benefits” for residents of seven majority-Muslim countries — Syria, Iraq, Iran, Somalia, Yemen, Sudan and Libya — that the Trump administration considers likely to produce national security threats. Second, it suspended indefinitely the acceptance of people fleeing civil war in Syria because, in the words of the order, “the entry of nationals of Syria as refugees is detrimental to the interests of the United States.”

The response was swift and loud. Protests materialized at airports and in cities across the country. (One memorable sign at Los Angeles International Airport read, “They Warned Us About This in Hebrew School.”) Flanked by recently arrived refugees, Sen. Chuck Schumer delivered a tearful speech. The nation’s acting attorney general, Sally Yates, wrote a letter stating that the Department of Justice would not defend the ban; hours later, she was fired and replaced by a U.S. attorney from Virginia, Dana Boente, who said that he would defend it. Via a spokesman, Barack Obama, newly returned from vacation, said, “Citizens exercising their constitutional right to assemble, organize, and have their voices heard by their elected officials is exactly what we expect to see when American values are at stake.”

Amid all the frenzy, something noteworthy happened online: Jews began telling personal stories. It was as though Trump’s executive order had unlocked an archive where they store some of the most raw, personal ideas about what it means to be a Jew, an American, an immigrant, a refugee, a human being.

Two days after the immigration order was signed, Dani Dekelbaum-Barr, a special education teacher in Texas, posted a mini-essay to Facebook that was shared more than 3,800 times. “I am a Jew whose family was murdered in the Holocaust, forced to dig their own mass grave in the Zhulkin Forest, I am the great-granddaughter of Jewish refugees working four jobs to send money to Poland to rescue their remaining family.”

“I am the woman who will not take off her Star,” she continued. “Who will not forget. Who will always remember and never deny her family, her heritage, her religion, her birthright, her God.”

“I have seen this before and I will not stay silent.”

Elsewhere on Facebook, the novelist Gary Shteyngart wrote on his official author page, “One of my strongest memories is the feeling of safety and warmth upon finally reaching JFK airport in 1979 as a Soviet refugee. Imagine coming from a country that is an even worse hell than the Soviet Union, the landing gear descending, the plane skidding to a halt. But instead of being reunited with your loved ones, you are questioned over your political beliefs and sent back to an uncertain fate. What kind of country would do this to human beings after everything we know?” 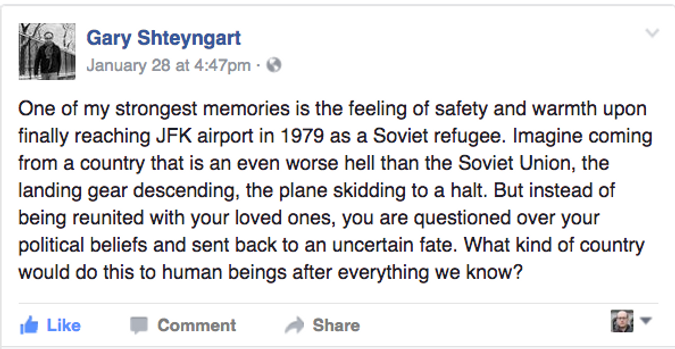 On Sunday, January 29, University of Denver graduate student Mark Mayer shared a photo of his grandmother Karola’s German passport from the 1930s. The prominently stamped “J,” he explained, was “a Judenstempel, a Jew stamp, to make her easily identifiable.” He notes how other pages in the passport show that his grandparents were allowed only a month to visit the United Kingdom and were prohibited from seeking employment there.

“They arrived in the United States early in 1940, just before domestic fears about spies and infiltrators truly closed down pathways for Jewish refugees,” he wrote. “That’s how I got here. Her mother and father died in Auschwitz.”

As Mayer’s post was being “liked” and shared on Facebook, a Google Document titled “Soviet Jewish Refugee Solidarity Sign-on Letter” was gaining signatures: “We, the undersigned… Soviet Jewish refugees, write to express our support for the United States’ refugee resettlement program and our opposition to President Trump’s executive orders that close America’s doors to vulnerable refugees desperately seeking our protection.”

At Vox, in a piece titled “Donald Trump Has Revealed Himself To Be a President Who Lacks Empathy,” Matthew Yglesias cited Schumer’s speech and Trump’s subsequent mockery of the senator’s “fake” tears, and wrote, “For most American Jews — especially those of us who, like Schumer and I, grew up in New York under the shadow of the Statue of Liberty — the sense of the United States as a place of refuge from the blood-and-soil nationalism of Europe is integral to our sense of American greatness.”

At the Atlantic, Julia Ioffe published a powerful account of her own family’s exodus from Russia and arrival in the United States. “This is what it’s like to be a refugee,” it begins. “Thousands of miles away, people haggle over policy details, about whether you are a risk and a burden, or an asset full of potential, a victim, or a potential tool of foreign policy, but really they are talking about you, and the days of your life and how you will live them.” Later in the piece, she wrote, “to most people watching the refugee crisis unfold, the refugees detained and turned back at airports across the country are likely abstractions, too. They do not see what brought them there or the bureaucratic Rube Goldberg machine they had to navigate to be deemed safe and responsible refugees.”

Why did so many Jews respond to a swipe of the president’s pen?

Evan Osnos is an author and staff writer at The New Yorker who recently spent five years living and reporting in China. He now lives and works in Washington, D.C., and when he heard the news of the ban, he tweeted a message to his more than 50,000 Twitter followers: “I’m alive because my father, a Jewish refugee born en route from Poland, was allowed into America in 1944. My generation owns today’s shame.”

Contacted by the Forward, he expanded on the story (though he noted he was speaking more as a citizen, author, and son than as a journalist). His paternal grandparents lived in Warsaw, Poland, until 1939, when they left for what Osnos calls a “long, chaotic trek” that took them through Romania, Turkey, Iraq and other countries, and ultimately brought them to Mumbai, where Osnos’s father, Peter Osnos, was born in 1943. Quoting from a ship manifest he retrieved during his phone call with the Forward, Osnos said the ship departed from India in December 1943 and arrived in San Pedro, California, in February 1944. The United States, he says, was literally a safe harbor.

To be Jewish, Osnos says, is to be aware of a shared experience of dislocation, “and to be aware that there comes a moment in history when even ordinary middle-class placid lives can be blown apart. And in those moments you really don’t have all that much to depend on except good fortune, and, if you’re lucky, the kindness of strangers.” 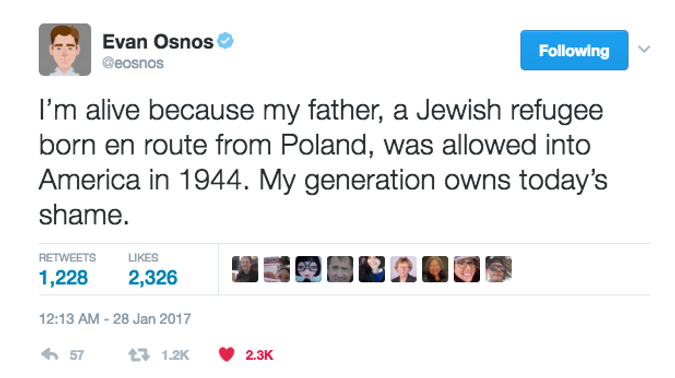 For Americans like him, who grew up in safety and comfort, stories of such physical peril can feel abstract to the point of illegibility. But that began to change when he took a trip to Poland in 2002 with his mother (who is Episcopalian), his father and his father’s elder brother. That trip helped him understand that it was not by accident that his grandparents made it to this country; it was the result of their sheer will and, on the other side, Americans who believed in providing sanctuary for people in distress.

He said that watching Trump issue the order blocking refugee resettlement “felt like not only a failure on the part of the White House, but in a sense a failure that all of us will have to bear as long as this remains the policy.”

Journalist, author and Russian refugee Masha Gessen also spoke out on the executive action’s implications. Her post-election dispatches for The New York Review of Books, among them “Autocracy: Rules for Survival,” and “The Putin Paradigm,” have made her a much-sought expert on life in an autocracy, or a democracy starting to look like one.

In the days before the ban was officially announced, she sent out a series of tweets listing people who had come to the United States as refugees: Gary Shteyngart, Julia Ioffe, Anya Ulinich, Hannah Arendt, Madeleine Albright, Henry Kissinger, Herbert Marcuse, Theodor Adorno, Albert Einstein. “Anne Frank didn’t,” she wrote. “Couldn’t get a visa.” After the ban was signed and the airport protests erupted and lawyers from the American Civil Liberties Union successfully obtained a temporary stay on the ban from a federal judge in Brooklyn, she added: “So grateful to those who showed up today: the protesters, the lawyers, the judges. Same gratitude I still feel for my own 1981 refugee visa.” 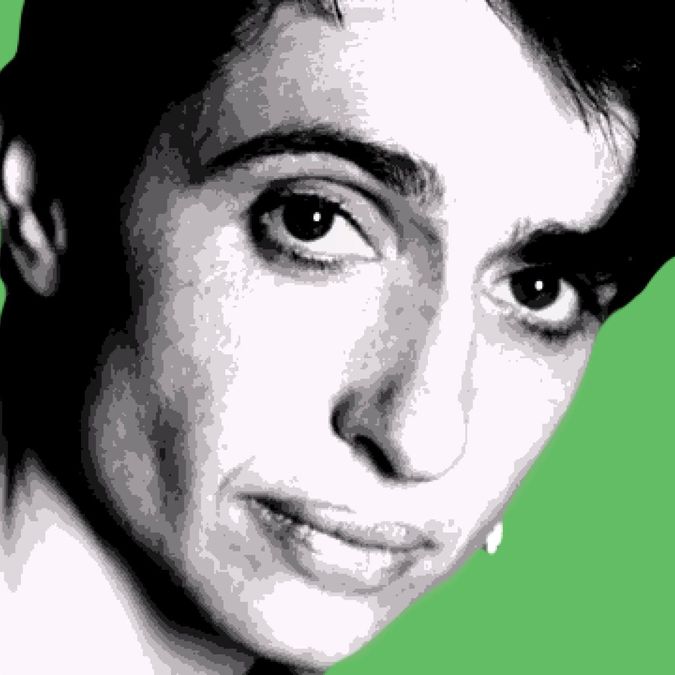 Speaking with the Forward from Oberlin, Ohio, where she is guest-teaching, Gessen said news of the ban made her sick to her stomach. It was, to her, the “most shocking thing that [Trump] has done so far.”

Her response was multilayered. She reacted as someone who came here as a refugee; as a journalist who has covered refugee crises in other countries; as someone with friends who have sought and received asylum in the United States, and as a Jew. “It hits close to home… because of the way the United States failed Jews during the Holocaust,” she said, noting that the Jewish story is the story of exile.

The ban, she says, runs counter to international law, and it ignores how refugees like the ones she listed on Twitter have enriched and built and transformed the country. But on a deeper level, she says, it cuts against certain core American ideals — ideals to which her own story is a testament.

The refugee visa she received in 1981 was a symbol of hope. “It meant I could be whoever it is I wanted to be, not what the state decided I could be, not what I was allowed to be as a Jew,” she said. To her it represents “that corny and beautiful American idea that the only person who can hold you back is yourself.” The country hasn’t always lived up to those ideals, and an ideal, by definition, can never be fully reached. “But, the American idea of progress, for most of its history, has been this idea of moving toward the ideals proposed by the Founding Fathers,” she said.

The United States, Gessen says, was the world’s first nation conceived as a state of immigrants. “That national story, as it happens, ignores Native Americans, and ignores people who came here in shackles, which is not a small thing.” But it is important nevertheless. Trump’s order, she says, represented a remarkable change of course. “It’s a huge thing when a president sort of goes against the national story in that manner.”