Paul Newman’s long-lost film “On The Harmfulness Of Tobacco,” will be shown for the first time in 55 years on February 20. The subject of an extensive and exclusive story in the Forward last November, it will screen at the Film Society of Lincoln Center as part of its “Newman Directs” program.

The Lincoln Center screening precedes by a little more than a month the scheduled March 26 airing of the Newman film — its first-ever screening for a national audience — on the Turner Classic Movies channel. Both at Lincoln Center and on TCM, the film will be shown in programs including other films Newman directed, together with panel discussions that will re-examine Newman’s work behind the camera. The Lincoln Center screening was prompted in large part by the Forward’s story, while the one at TCM was in the works before it appeared.

Re-creating a one-act monologue by Anton Chekhov in which a middle-aged man explores his wasted life, Newman shaped a 25-minute film that used the interior of a former Yiddish theater on Second Avenue. The result draws on the spare poetic language of an exhausted anti-hero’s confessions in a black-and-white film that stars an actor who is mostly forgotten these days but was considered by other, more famous friends, who in many cases knew him from New York’s famed Actors Studio, to be among the most gifted of his day.

His professional name was Michael Strong, but he was born Cecil Natapoff, a Russian Jewish actor from the Bronx, the son of immigrants who came to this country to flee pogroms in Russia. The Forward story explored his career in New York and Hollywood, and detailed the role Strong played in the founding years of Lincoln Center as a vessel for the revival of long-frustrated hopes for a national theater repertory company based in New York. The actor died in 1980.

“Being a founding member of the Repertory Theatre of Lincoln Center was one of the two parts of my father’s career that he was proudest of,” Paul Strong, the actor’s son, told me. “That this film should be given its first public screening in over 50 years at Lincoln Center is like bringing his life full circle, and it would make him very happy.”

Meanwhile, Nell Newman, the eldest daughter of Paul Newman and Joanne Woodward, declared from her home in California that she’s “really quite excited” about the February 20 screening of “On The Harmfulness Of Tobacco.” She said she and other family members did not know the film existed until she read the Forward’s story. 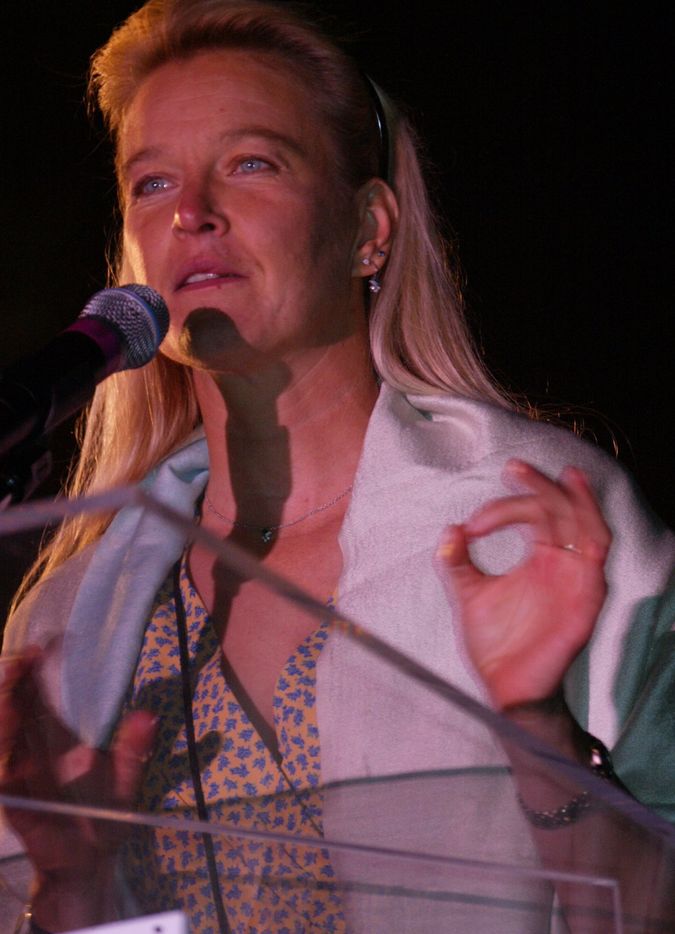 Environmental Activist: As a child, Nell Newman appeared in some of her father’s movies, including ‘Rachel, Rachel.’ Image by Getty Images

The Lincoln Center screening of “Tobacco” will be followed by “The Effect Of Gamma Rays On Man-In–The-Moon Marigolds,” a 1972 film in which Newman directed Woodward, his wife, as the hard-bitten mother of two young daughters who is struggling to survive at the far edge of the American dream. Nell Newman, now an organic foods and environmental activist, spoke with the Forward about playing the younger daughter under her father’s direction. “He was good at directing children, especially his own children,” she said. “He was very good at presenting me with an idea or very simple instructions on how to play a scene.

“You know, when you’re 8, you are still open to experiences and to behavior. I never wanted to act as an adult, because you build up too many blocks between yourself and your ability to emote.”

Her work in “Gamma Rays,” she said, didn’t take much acting, because she and the character had so much in common: “I was shy and I was a science nerd. I was really just acting like myself. We used to joke that I beat Linda Blair for the part, because she went to school with me.”

Her father was, she said, “a man of few words” who rarely spoke in front of her about his memories or ideas regarding filmmaking. But she did recollect: “One night we were watching TV, and he commented to me that modern movies were so different than the ones from the 1940s and 1950s era when he got started, that they didn’t take advantage so much of just silence and open moments in which things didn’t necessarily happen, that movies were so much slower in the early 1940s and 1950s.” “Tobacco” is a film whose dramatic pacing was clearly built — by both its main actor and its director — around a rhythm of starts and stops, long pauses in which the actor seems to be slowly absorbing his own experiences of memory, and grasping for his connections to language and his feelings. As an actor and director, Newman was admired for his ability to get at what happens around and between the spoken lines.

My interview with Nell Newman came after months of difficulty I’d had, while reporting my initial story, in obtaining interviews with Newman family members who might answer the key mystery about “On The Harmfulness Of Tobacco”: Why did Paul Newman take his name off this film, turning it over to his actor, Strong? That’s what happened, according to Jack Garfein, a theater and film figure and Holocaust survivor who, when I met him, possessed the only surviving print of the film. Garfein has been nervously protective of what seems to be the sole existing print of the Newman film, anxious about letting it or copies of it into the hands of others. Film preservationists have wondered what Garfein intends to do with the print, which is in good condition despite its long journey to public view, to make sure it stays well cared for. Garfein has said he plans to make sure the film is well preserved. 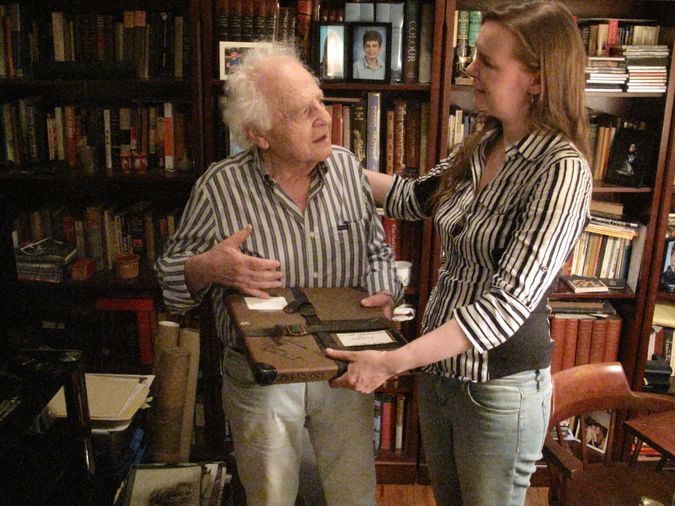 Only Surviving Print: Jack Garfein holds a copy of ‘On the Harmfulness of Tobacco.’ Image by Allan M. Jalon

The Film Society’s ability to show this movie, followed by a question-and-answer session with Garfein and David Amram, who composed the film’s score, has stemmed from negotiations between the society and Garfein that were completed in the past few weeks, according to Garfein’s representative, Lori Styler.

Nic Rapold, editor of Film Comment magazine, which is officially associated with the Film Society, said that he had not seen the Newman film when he chose it for the program, but the Forward’s story persuaded him of its “evident historical value.” “I was very pleased when you wrote about it, because it is really very helpful when somebody fleshes out that kind of secret history that can help build an audience for something.”

Based on that hope for public interest, he said, he took “the unusual step” of accepting a film for screening in the Film Comment Selects series without watching it first. “The plan is that this is a case where we’re going to be discovering the film with the audience,” he said. “It’s not the usual practice, you might imagine, but it’s a short film with a feature we like. We usually watch all the films that we program, but in this case the opportunity was not available.”

He said that he was “a big fan of Paul Newman, and [his directing] is such an interesting facet of his career, though it is not totally unknown by any stretch. I am personally very fascinated by actors who double as directors in their careers. You often see a special sensitivity to the staging of a scene on screen.”

Rapold, whose Lincoln Center-sponsored publication is regarded as a leading outlet for film criticism and history, said he was aware the film existed before the Forward’s piece but wasn’t clear how—“I saw something about it on-line, I think,” he said. Newman biographers wrote from an awareness of the film, but none seem to have been able to see it. One of them openly lamented that fact and called “On the Harmfulness of Tobacco,” “a lost movie.”

Nell Newman, like Paul Strong, said she is unlikely to make the Film Society screening. Both plan to watch the TCM broadcast on March 26. And both spoke of how the renewed attention to Paul Newman evokes vivid personal memories of the worlds their parents inhabited. Newman’s daughter remembered her fleeting appearances in “Rachel, Rachel,” which TCM plans to include in its Newman evening, in flashbacks as the childhood incarnation of the character her mother played as an adult. “My sister Clea was the baby at the end, and my sister Lissy (Melissa) was a girl in the classroom. And our friend Stewart Stern wrote the screenplay.”

Strong recalled going to the Lower East side as a teenager to visit the set of “On the Harmfulness of Tobacco” in 1959. He said meeting Paul Newman was of more interest to him than watching his father act. Newman impressed him as “very cordial,” but a strangely specific visual recollection also glistens through an ocean of time, a moment when a movie star a teenager had watched on screen became a mortal physical presence.

“He was wearing something that was popular then, called an ID bracelet,” Strong said. “He wore those in his films and when I met him he was wearing it. It was a silver plate that had his name engraved on it, and that is something I never forgot.”

*’On the Harmfulness of Tobacco’ will be shown at the Film Society of Lincoln Center on February 20 at 7:00 PM as part of the ‘Newman Directs’ program.

Allan M. Jalon’s previous articles for the Forward include ‘Paul Newman’s Lost Masterpiece and How We Rediscovered It.’