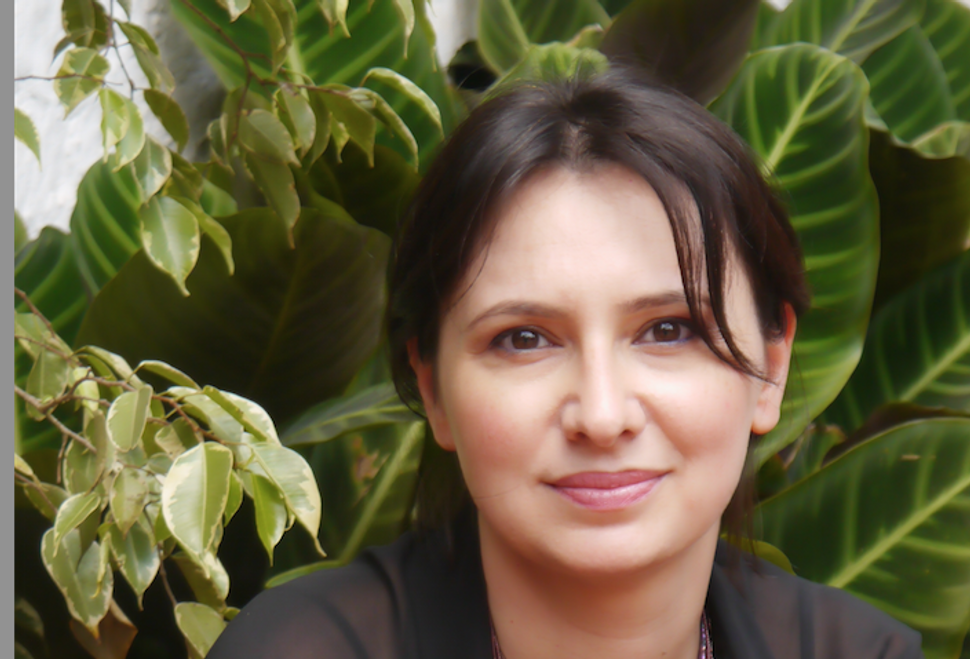 Two weeks before the inauguration of President Trump, in a quiet diner some 25 miles up the Hudson, from Manhattan, Sana Krasikov said something she could not have imagined would be as prescient as, in retrospect, it clearly was.

“I was asked after my last book, ‘What’s your most valued possession?’” she told me. “I said, ‘My American passport.’”

We were discussing Krasikov’s debut novel, “The Patriots,” which was released January 24. (No, it’s not about the 2017 Super Bowl champions; still, chalk up another one to Krasikov for timeliness.) The book tracks three generations of one Jewish family as its members move between the United States and Russia. That family’s matriarch, Florence Fein, makes the first trek in 1932, taking off from Brooklyn to remote Magnitogorsk, then Moscow, bound for Russia’s seeming economic promise. Despite the flimsiness of that promise, Florence stays in Moscow for years, finding a warm home in that city’s expatriate community.

Then — spoiler alert — as Josef Stalin’s purges begin, she decides she’d like to go home. That option is cut off: In a paralyzing sequence, Soviet immigration authorities confiscate her United States passport.

I felt an extraordinary sense of claustrophobia reading that scene, which, Krasikov admitted, was her goal. Having first come to the United States at age 8, after being born in Ukraine and raised in the Soviet Republic of Georgia, she explained, she possesses a particular appreciation for the document that lets her travel freely as an American.

Three days after “The Patriots” was released, Trump signed an executive order halting entry to the country for residents of seven Muslim-majority countries for 90 days. In the chaos following that ban’s enactment, a number of green card holders from the countries in question, attempting to return to the United States, were detained at airports, denied translators and legal counsel, and forced to sign documents they did not understand that canceled their visas and legal resident status.

It was a move that would have been familiar to Krasikov, who pulled the confiscation of Florence’s passport straight from history. American expatriates living in Russia in the late 1930s were stripped of their passports; as she relates in her novel, the United States State Department did nothing to assist its stranded citizens.

“I thought it was interesting that there was just so much false legality that had to happen in order to legitimize all these things,” she mused. (For anyone keeping an eye on Trump’s Twitter account as he follows his executive order’s journey through the courts, a propagandistic insistence on the legality of a legally dubious law will not sound unfamiliar.)

In “The Patriots,” Krasikov is strongest when she is enraged, including, powerfully, when she condemns the mishandling of American expatriates living in the Soviet Union. The chapter where Florence’s son, Julian, details America’s abandonment of its Soviet-dwelling citizens sizzles: “‘In short, the trapped Americans, my parents included, were not abandoned. They were not even forgotten. They were sacrificed on the common altar of two superpowers,’” he said, fuming.”

But moments of such concentrated passion are too infrequent in the novel, lost in the breadth of material it strives to cover. Krasikov began writing the book with two inspirations: the story of a friend, who, like Julian, was born to an American mother who moved to Russia in her 20s and stayed for decades, and a desire to capture the

interdependent development of Russia and America in the 20th century.

“To some degree, it was a work of fiction, but to another degree it was an alternative history of the relationship between Russia and America,” she said. “I saw this story as sort of a chronicle of the back end of the history of the two countries.”

To research the book, Krasikov, whose debut short story collection, “One More Year,” earned her both a spot on the National Book Foundation’s 2008 “5 Under 35” and the Sami Rohr Prize For Jewish Literature, spent a year in Moscow. She started writing “The Patriots,” she said, only when her knowledge of Russian history, between the ’30s and the ’80s, was so thorough that she “could read something and know exactly when it happened, to the month.”

Her eagerness to capture that history, and to create a comprehensible portrait of Russian culture as it has evolved and stayed the same, is simultaneously her novel’s greatest asset and its greatest liability.

The sequences in which the force of history strikes a genuine nerve for the characters it involves form the book’s most powerful passages. (An especially visceral example is the sequence in which Julian remembers the injustice done to his expatriate parents during Stalin’s purges, when his father, Leon, was killed and Florence was sent to a hard labor camp.) At other times, though, the history seems to swallow its characters. At the same time that the novel works to make Florence’s ethically murky path through her Soviet life seem inevitable, it’s difficult to escape the feeling that her actions are designed to illuminate as much of the corrupt totalitarian workings of the Soviet government as possible.

Similarly, when Julian, who has made himself enthusiastically American, revisits the country where he lived for nearly four decades — there both for business and to visit his son, Lenny, who has made himself a defiant Muscovite — it often feels as if he’s there to guide readers on a too hasty, too grand tour of Vladimir Putin’s Russia. He encounters state corruption, business corruption, rampant alcoholism and extraordinary obstructionism, and he bargains and barters his way through it all, providing an inside look at the true Russian method of survival. Krasikov’s depiction of society feels genuine, but that doesn’t preclude it from feeling forced, as if she’s imposed a plot on anthropology.

“Patriots” seems a bit too neat and a bit too broad to feel real, an effect augmented by Julian’s bellicose narration of his experience there. (While sections focused on Florence and Lenny are written in third person, Julian’s are composed in a somewhat abrasive first.) “What I faulted him for — though I could hardly admit this to Lenny — was the same thing I faulted Mama for,” Julian thinks, attempting to rescue his son from a scrape with the authorities. “Neither of them seemed to have the foggiest idea of how to protect themselves in this country.”

Even before the ascent of Trump, whose campaign and transition into the presidency were marked by rumors of his perhaps suspiciously close relationship with Putin, the modern relationship between the United States and Russia has been a matter of fraught and enormous significance. Some popular understanding of that relationship is a matter of urgency, and Krasikov doesn’t feel as though history, as written in headlines, does an adequate job communicating it. (“If you were to read the headlines, like the front end of history, you’d get a very different picture from the back end of history, that kind of profitable entanglement, profitable rivalry that the two countries have,” she said.”)

At the same time, Krasikov doesn’t see an end to the countries’ outsize influence on each other, she said; instead, she felt American anxiety over Trump becoming a Putin-esque figure in America might not be exactly appropriate. “I do really believe in America’s ability to move past its various periods, and kind of still stay American,” she said. “Maybe that’s my own form of immigrant patriotism.”

If things do turn sour, though, it’s good to know what signs to look out for. Hence the novel’s potential significance for Americans, as many anxiously attempt to predict their country’s future.

“I feel like we forget the history books we read,” Krasikov said. “But we do remember the novels we read.”

Talya Zax is the Forward’s culture fellow. Contact her at zax@forward.com