How Marie Antoinette and Sean Spicer Are Making Babka Famous 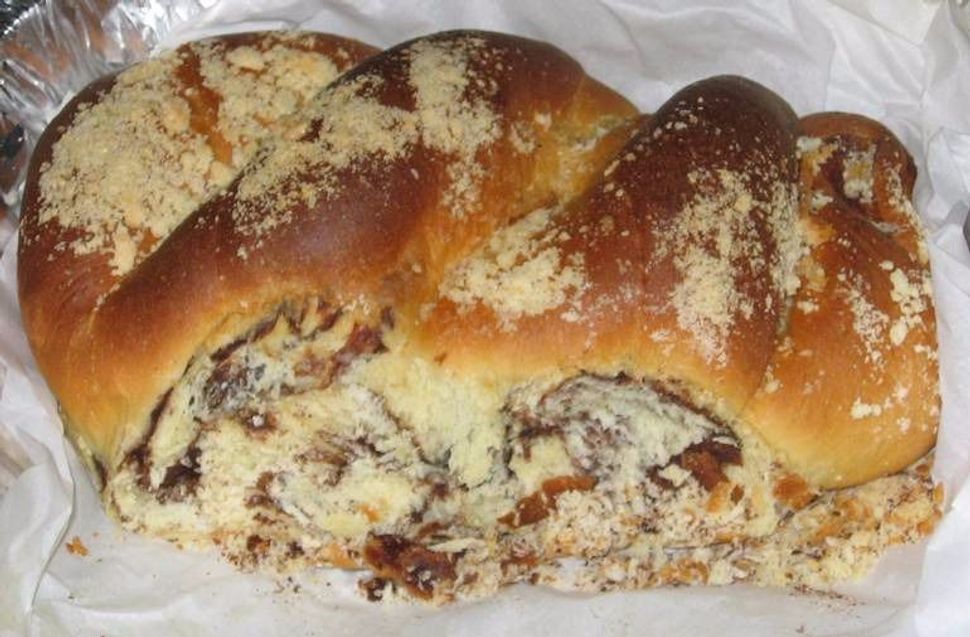 Bomb threats against JCCs throughout the U.S. are bringing many reactions, but none tastier than this tweet from The Anne Frank Center for Mutual Respect in response to Presidential spokesman Sean Spicer’s bizarre insistence that Donald Trump has spoken out against anti-Semitism many times:

Spicer @WhiteHouse says about our org: “No matter how many times @POTUS talks about #Antisemitism it’s never enough.” LET THEM EAT BABKA.

That’s a nice Jewish twist on “let them eat cake,” which is a frequently used translation of a sentence in Jean-Jacques Rousseau’s autobiography, “Confessions.” But wait — that’s just the beginning of the story.

In French, the sentence actually reads: “Qu’ils mangent de la brioche” and it is often mis-attributed to Queen Marie Antoinette, who was nine years old in 1765, when Rousseau wrote those words in his multi-volume opus. (He finally published it in 1782.)

In the interest of facts, an endangered concept these days, in the previous sentence, Rousseau merely refers to a grande princesse, and he doesn’t name names. There’s no record of Marie Antoinette saying anything about brioche.

What the “let them eat cake” saga does show is that “fake news” has a long history; the misattributed utterance was taken as a symbol of total disregard for the struggles of poor peasants; brioche was a luxury, and certainly not within the means of the poor.

But language nerds had another pressing concern. Come to think of it, what does the word babka mean?

The Oxford English Dictionary says babka is the diminutive form of baba, which, “via French from Polish, literally ‘married peasant woman.’” (The shadow of Marie Antoinette and the peasants lives on.) The OED also points out that baba in Indian culture means father or respected older man, but that’s not relevant to the European cake that has become a staple of Jewish-American cooking as well as Israeli bake shops.

If babka immediately makes you think grandmother, or the Yiddish word for grandmother, bubbe, it’s because, well, that’s also what babka means.

The Polish and Belarusian noun babka and the Belarusian, Ukrainian, and Russian baba mean “grandmother” or “little grandmother.” And while this may sound a bit creepy, “The Oxford Companion to Food” points out that the babka’s bottom part looks like the pleats of a skirt — in other words, the kind of thing grandma might wear.

No matter what grandma is wearing, many of us would love it if a brigade of feisty Jewish grandmothers were responding to Spicer and Trump right now, perhaps while slinging babka.

So how did a word for grandmother become a pastry? According to the Canadian Oxford Dictionary, babka as a pastry name came to English from Polish, via French. But don’t worry too much about grandma’s disappearance from use: The Canadian Oxford assures us that babka is still sometimes used in its original meaning (“grandmother”), especially among those of Central and Eastern European descent. And of course, the word babushka can be heard in neighborhoods with Russian-Jewish grandmothers in abundance. Babushka means grandmother, and is the diminutive of baba, or older woman, according to Merriam-Webster.

If all this etymology just makes you want to snack, you’re in luck. You can certainly make babka at home, no matter what your heritage, and a bonus is that making babka can keep you busy long enough to miss a news cycle and the accompanying rise in blood pressure.

“Baking a chocolate babka is no casual undertaking,” writes Melissa Clark of The New York Times in her introduction to her babka recipe.

“The Eastern European yeast-risen coffee cake has 14 steps and takes all day to make,” Clark writes. “But the results are worth every sugarcoated second – with a moist, deeply flavored brioche-like cake wrapped around a dark fudge filling, then topped with cocoa streusel crumbs.”

Here is her recipe:

If fourteen steps seems too simple, and you want to stay busy and distracted from the Presidency for even longer, Bon Appetit offers a babka recipe featuring a “double helix twist.” Think of it as supporting science, another endangered entity right now.

Maybe babka will get a Trump bump, just like Nordstrom’s, Teen Vogue, and other unexpected members of the resistance. But for those who follow pastry, grandmother’s favorite snack, babka, was getting kind of hot before the Anne Frank Center made it even hotter.

“Bon Appetit magazine declared last month that babka is the new bagel, meaning it is finely making its way to the masses. We can only rejoice,” Vered Guttman of Haaretz wrote about a year ago, when it seemed a bit easier to rejoice.

Not to be outdone, Haaretz offers a classic poppyseed babka recipe, an ideal treat to master with Purim only weeks away. Last but certainly not least, Haaretz even offers a ten-photo, step-by-step babka-making primer which makes babka-making seem totally doable, and even soothing.

Far less damaging to the heart rate than watching Sean Spicer, and a reminder that if our grandmothers survived what they survived and still managed to roll dough, spread chocolate, and enjoy the ensuing babka, perhaps we can best get through this with a little piece of elaborate yeast cake too.

How Marie Antoinette and Sean Spicer Are Making Babka Famous