Why It’s Critical That We Demythologize The Holocaust 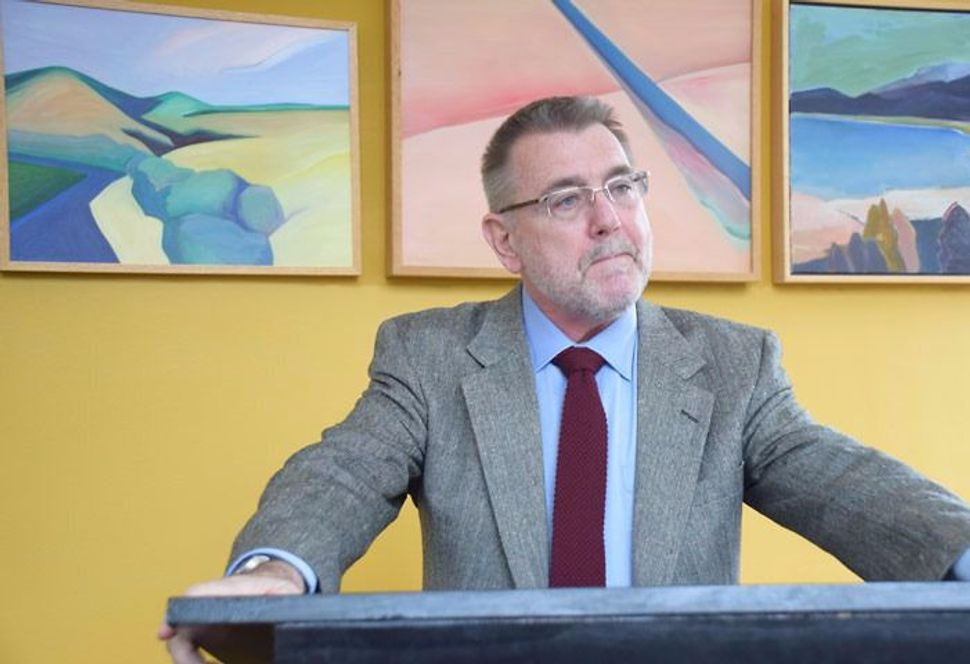 The historian Peter Hayes has always derided what he regards as simplistic explanations of complicated phenomena. In his popular Holocaust lecture course at Northwestern University, he savaged Daniel Goldhagen’s argument, in “Hitler’s Willing Executioners,” that a uniquely German “eliminationist anti-Semitism” caused the Holocaust.

Hayes, who now chairs the U.S. Holocaust Memorial Museum’s Academic Committee, does not accept the idea that the Shoah defies comprehension. Comprehending it is the historian’s task, he believes.

“Why? Explaining the Holocaust” exemplifies Hayes’ clear-eyed commitment to analyzing the Holocaust in all its complexity. His fondness for long lists of causative factors can make the volume resemble a lecture run amok, and the dearth of enlivening narrative or anecdote is a deficit. But Hayes is never less than lucid.

“To understand the Holocaust requires solving multiple puzzles that surround it,” he writes. Applying a keen analytic mind and the statistical predilections of an economic historian to the latest scholarship, Hayes seeks to demythologize the subject and offer balanced assessments of responsibility, blame and relative suffering.

As the late David Cesarani noted in “Final Solution: The Fate of the Jews 1933-1949,” a gap has grown in recent years between expert knowledge and common perceptions, or rather misperceptions, about the Holocaust. Hayes, like Cesarani, seeks to bridge that gap.

After an introduction, “Why?” contains eight sections, each of which addresses a set of related questions. Hayes begins by asking why the Jews were targeted, and why the Germans became their attackers. He discusses how initial anti-Jewish measures escalated first into murder and then the quest for total annihilation. He takes on the charged issues of why Jewish resistance was so fragmentary, why survival rates diverged from country to country, and why most onlookers didn’t do more to help. Finally, he explores the lessons and legacies of the Holocaust.

Hayes argues throughout that anti-Semitism alone, however virulent, was insufficient to account for the Holocaust. To facilitate Hitler’s rise to power, economic and political crisis was necessary; anti-Semitism was secondary, Hayes suggests, to resurgent nationalism and economic desperation. (Of course, the reconstituted German nation was defined in part by scapegoating and exclusion.)

As we know, the Nazis at first sought the impoverishment and emigration of Jews, not their wholesale slaughter. And, to some extent, Hitler modulated his anti-Jewish measures in response to circumstances, testing domestic and world opinion. But war reset the playing field. German military successes had the perverse, if predictable, effect of bringing millions of Jews in Eastern Europe under Nazi hegemony, making the emigration “solution” impractical and sparking Nazi “impatience, frustration, and hubris.”

Historians have faulted Jews for not forecasting the horrors ahead more accurately. In fact, as Hayes underlines, a majority of German and Austrian Jews were prescient enough to flee in time, navigating immigration restrictions and abandoning most of their possessions. The people who remained behind were disproportionately the old, the infirm and their caregivers. Of German Jews 24 years old and under in 1933, 84 percent got out alive, compared to 60 percent of the total population.

The philosopher Hannah Arendt is among those who castigated Jewish leaders — and especially the ghettos’ ruling Jewish Councils — for cooperating, however reluctantly, with the Nazis by registering Jews and facilitating deportations. Hayes sees these harsh judgments as unfounded. Mostly unarmed, exhausted, starving and surrounded by enemies, Jews had very limited scope for effective, lifesaving action.

The statistics Hayes summons to describe the most famous act of Jewish resistance, the 1943 Warsaw Ghetto Uprising, make the case: “In the course of suppressing the uprising, the Germans and their auxiliaries suffered somewhere between 110 casualties (seventeen dead and ninety-three wounded, according to the official figures) and three times that many (according to the resisters). Either way, the figure is tiny compared to the 56,065 people the German captured or killed.” That the uprising was (and remains) imaginatively stirring — even redemptive — for many Jews is not an issue with which Hayes cares to grapple.

Anti-Semitism surely factored into the lack of help for Jews. But Hayes argues that it was powerfully combined with self-interest. The Allies kept their focus on the broader war; collaborationist states sought to curry favor with the Nazis; even individuals who might have been inclined to help feared reprisals.

The situation was especially difficult in the “Hobbesian world” of Poland, where even non-Jewish Poles were under siege. Some Poles happily accepted purloined Jewish possessions, some joined in the slaughter (the Jedwabne massacre is a particularly heinous example), and others sought only to save themselves. But there were many stories of risk and rescue as well.

Hayes applies his signature evenhandedness to the case of the Vatican, which was slow to condemn the Nazi persecutions of Jews. Along with the Catholic Church’s anti-Semitism and the imperative of institutional survival, Hayes attributes the hesitation to religious scruples — specifically, the desire to safeguard priests and thus keep the sacraments, considered necessary for salvation, available to those in Nazi-occupied realms.

Among the popular misconceptions Hayes dismantles is that many high-level perpetrators escaped justice. In fact, as he enumerates, top Nazis officials and concentration camp commanders frequently received death sentences or prison terms. Still, as he concedes, thousands of lesser criminals — from members of mobile killing squads to concentration camp guards — did elude punishment.

“The Holocaust was not mysterious and inscrutable,” Hayes concludes, but rather “the work of humans acting on familiar human weaknesses and motives: wounded pride, fear, self-righteousness, prejudice, and personal ambition being among the most obvious.” He adds: “Once persecution gathered momentum, however, it was unstoppable without the death of millions of people, the expenditure of vast sums of money, and the near destruction of the European continent.”

One lesson to draw, Hayes writes, is the relevance of a German saying, “Beware the beginnings” — because early resistance can change the course of history.

Julia M. Klein, the Forward’s contributing book critic, was a finalist this year for the National Book Critics Circle’s Nona Balakian Citation for Excellence in Reviewing. Follow her on Twitter @JuliaMKlein.

Why It’s Critical That We Demythologize The Holocaust