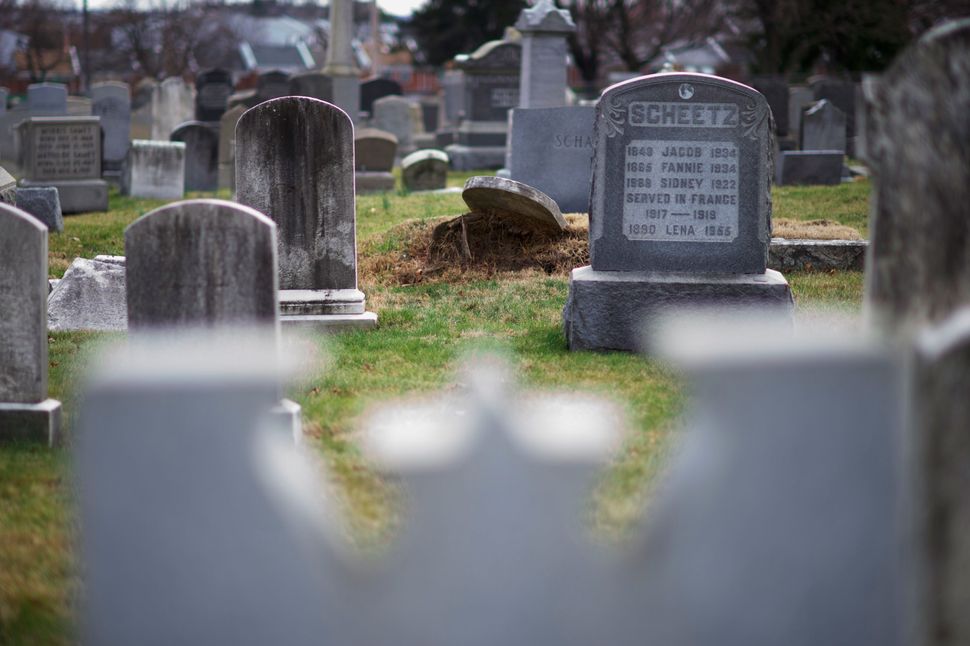 Why does the sight of a toppled gravestone incense us so sorely? As a way in, imagine a different sort of scenario, one perhaps more visceral and more literal in its horror. Imagine the photographs of Roman Vishniac from his book, “A Vanished World.” The photographs depict Eastern European shtetl life just before the cataclysm of the Holocaust, that is, just before this way of life – these towns, these people – were wiped from the earth, were “vanished.” Now imagine these photographs, these last testaments, these last pieces of evidence of existence, displayed at a gallery. Not just the photographs, but the negatives, the original documentary evidence.

Now imagine a man walks into this gallery, and lights the film on fire. The gallery is consumed by the flames, and now, when you look for Vishniac’s images, you only find their ash.

In this hypothetical scenario we’ve not only lost art (some of the world’s greatest) but memory as well, that is, we’ve lost the lives of the vanished yet again. So too in the case of the Mount Carmel Jewish Cemetery in Philadelphia and the Chessed Shel Emeth Cemetery in St. Louis – the vanished have vanished again. But why, to return again to our first question, should this disgust and enrage us? Even beyond the immediately affected parties, we, as a society, seem to find something especially abhorrent about the destruction of graves. But surely an assault on the dead is far less important than an assault on the living? Surely, we must say that, in the grand scheme of anti-Semitism, the desecration of graves is less ominous than the recent spate of bomb threats against our country’s JCC’s. (If we do not believe in God then shouldn’t this desecration carry even less weight?)

Death is the only truly personal experience, but it can never be experienced personally. My death is my own, and it is inevitable – no one can substitute themselves for me. Only I can die my death, and in this regard it is perhaps the one thing that can never be taken from me. But, despite my inextricable ownership of my own mortality, my death is the one thing that I cannot experience. The moment of death is simultaneous with death itself – I cannot experience my own death because at the moment of death’s occurrence, I am dead.

Death, then, is experienced by others, that is, by the living. Not as “death” but as loss, as absence (Martin Heidegger, whose name seems conspicuously, cruelly useful in this article, writes that “The dying of Others is not something which we experience in a genuine sense” – but still, it is the only possible experience of death). Death is the limit, the border beyond which experience does not pass, but the idea of death (like any idea) belongs firmly in the realm of life.

So when a tombstone is toppled or a corpse defiled, the victim is not the deceased, but the living who must now experience death twice over. In the first death, where there was a person there is now only the absence of that person, that is, nothing. But still, the physical site (the grave) and its physical contents (the corpse, the coffin) are filled with this absence – they become the place where we deposit loss. Just as life is something both tangible and intangible (we say “life has left…” as if it is separate from the body) so to do we fill the grave with something tangible (the corpse) and something intangible (death, or memory of life).

What to make of this second death then? When a grave is desecrated or destroyed, the mourning party’s site of memory is destroyed – its personal importance is replaced by political importance. The site that contained the absence of the person is now a site that contains a message about hate, or violence, and the memory of the person is forgotten beneath the memory of these larger forces. The mourning party still remembers the dead, of course, but the grave’s larger signification has changed – filled with another meaning, the site expels the memory of the dead. The vanished are vanished again.

What is lost is not only the grave as a site of memory for the mourner, but also for the world. Just like the Vishniac photographs act as evidence, so too do grave sites. In many cases, the stone bearing the person’s name and dates is the only evidence of their existence. When a grave is destroyed or damaged, history is destroyed, eradicated – the person is erased. Even in cases in which the deceased has living kin, their deaths will mark the departure of the last evidence of their existence.

To damage a synagogue is an unforgivable crime, yes, but to destroy a cemetery, to erase its records (thankfully the records in St. Louis in Philadelphia went untouched), is, in a way, worse. A synagogue can be rebuilt – memory, once gone, cannot be restored. In this way, the destruction of memory is a more effective means of destroying a people – who are always more than just their blood and buildings; they are eons of culture and ritual, all built upon the continued capacity for, and existence of, memory. We know that we exist as a people (as a more or less continuous, homogenous entity), we draw justification for our peoples’ existence, from our past. Erase the past and you can erase the certainty of our common bond, of our justification for the word “Jew.” Destroy the dead, and the living are suddenly set adrift – a product without an origin.

The desecration of the two cemeteries has been dismissed, or derided, as a cowardly act, and it is, of course – the dead cannot defend themselves. But its intent and effect are more insidious than mere vandalism, and its cowardice cannot negate its incredible importance. To destroy a cemetery is to signal that the existence of a people is so unacceptable that even their memory, even their dead, must be killed. This is why the destruction of graves is so abhorrent – it is an assault on memory, that is, on existence.