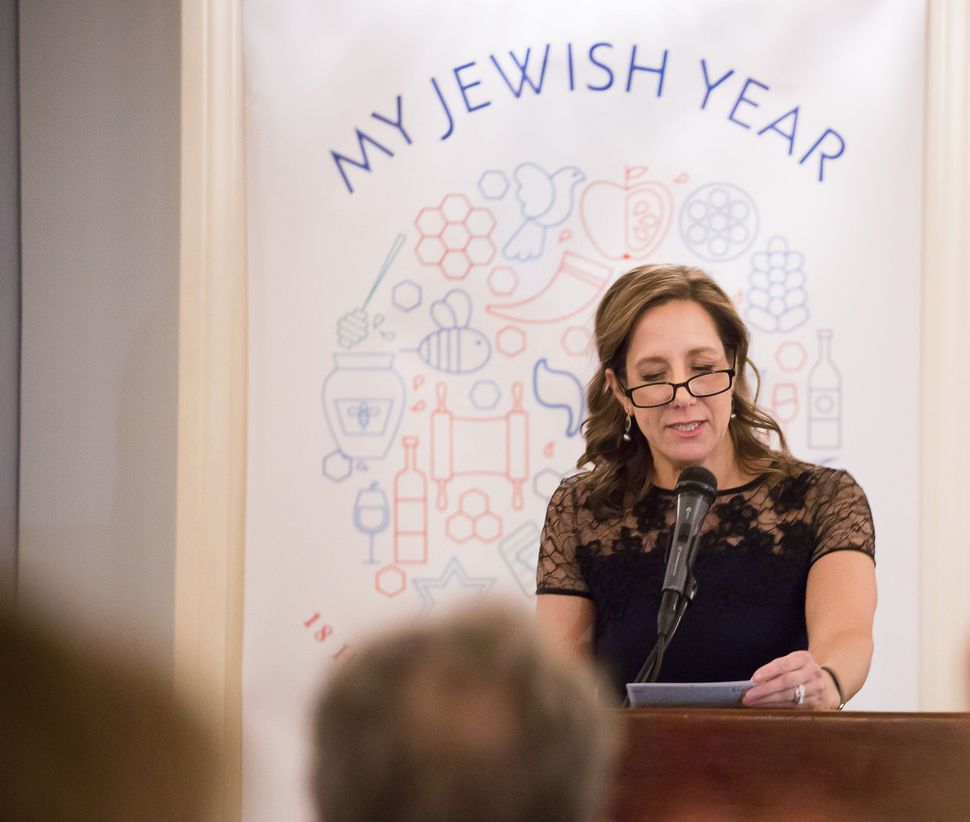 In abundance at the March 6 launch of Abigail Pogrebin’s “My Jewish Year: 18 Holidays, One Wondering Jew,” among other things, were wine, a distinctly Jewish sense of goodwill, motherly advice, and petite, tastefully arranged spoonfuls of raw tuna, the last of which the event’s caterers could surely have described in more appetizing terms.

More prominent, even, was gratitude. Delivering remarks to the gathering, in a lofty, airy ballroom at Manhattan’s Yale Club, Pogrebin thanked a lengthy list of people, an appropriately Jewish gesture of communality. There is, after all, a reason we refer to one another as members of the tribe.

In the audience Rabbi Angela Buchdahl, who presides over New York’s Central Synagogue, of which Pogrebin is currently president, was thinking about how to translate the author’s year of Jewish observance to the community they share.

“I love that she drew inspiration from across the entire Jewish spectrum,” Buchdahl said. “And we realize that while we might have different views on Israel, or other things, the holidays – even if we might observe them in slightly different ways – bind us together as a Jewish community.”

Erika Dreifus, media editor at Fig Tree Books, the publishing house that put forward “My Jewish Year” — which originated as a series for the Forward — thought the book might bring the Jewish community together for another reason: Sheer relief at having a reason to step away from the news cycle.

“It’s just such a joy for me to be focused on this book, and sort of return to the real basics, and the sort of heart and soul of what it means to be Jewish, and observing our rituals and our traditions in this country,” she said.

Will other Jews raised like Pogrebin – in a “cafeteria-style Judaism,” as her mother, Letty Cottin Pogrebin, would put it later that night – follow her lead, taking more serious looks at the Jewish holidays they’ve either never celebrated or practiced, mostly, by rote?

One already has: Michelle Caplan, Fig Tree Books’s Editor in Chief. After reading the book 500 times – so she approximated – she found it worked its way into her own Jewish practice.

“I found that I actually this year have been tracing Abby’s path. So I am living, essentially, Abby’s life in my own way,” she said, accepting a passing caterer’s offer of – you guessed it – raw tuna.

Not all talk was of solidarity already accomplished, at least when it came to the Pogrebin clan. Cottin Pogrebin, whose own fraught history with Judaism forms an important backdrop to her daughter’s new work, elaborated on her declaration that, when she came of age to choose a religious path, “feminism ended up being my religion.”

In another environment, the statement might have been received with some dismay. After thousands of years, if Judaism is still imperfect in its consideration of all its members – and, perhaps, even those outside it – what hope that it will eventually reach that imagined point of complete humanity and equality?

But it was an optimistic night, and at least one listener hopefully registered Cottin Pogrebin’s wish as a prediction, if one already too-long delayed.

Abby Pogrebin was in a hopeful mood, too, when she was cornered by the Forward towards the end of the night, as a bulk of guests filtered out and those who remained embarked on third and fourth glasses of wine. Your correspondent, feeling schmaltzy, asked Pogrebin what images would stay with her from the evening.

“Looking out at a crowd that spans denominations and congregations was incredibly powerful to me,” she said, as another admirer approached. “In this room there is the Jewish family that not only carried me through this, but I think should be the Jewish future.”