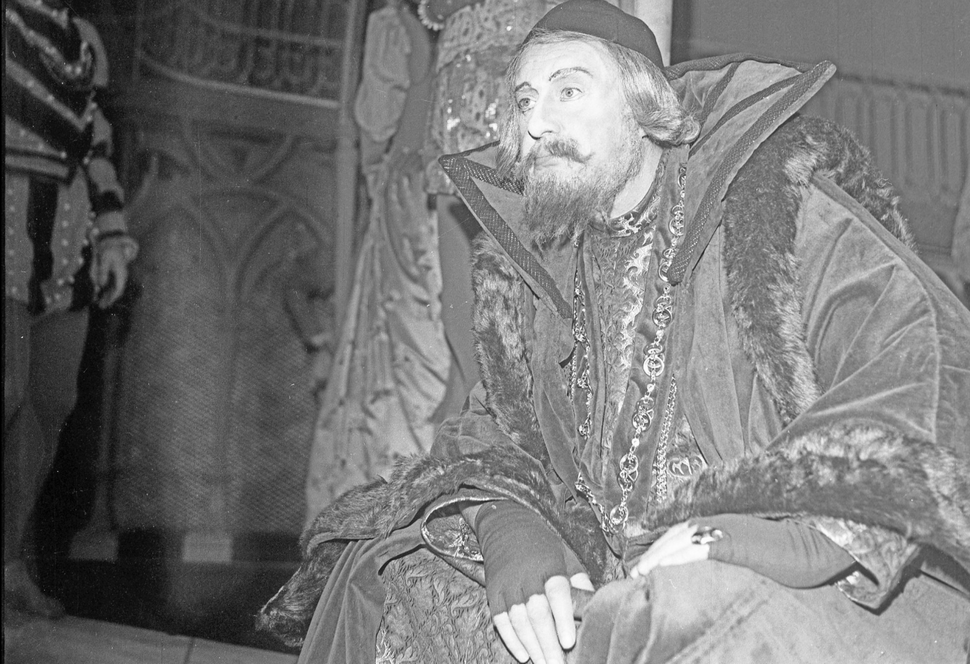 Shakespeare’s “Merchant of Venice,” with Shylock, the vengeful Jewish money-lender, is seen by many as anti-Semitic. Yet Jewish actors and directors have been drawn to the play. “Wrestling with Shylock: Jewish Responses to The Merchant of Venice,” a collection of essays edited by Edna Nahshon and Michael Shapiro from Cambridge University Press, tries to explain why. It includes an essay by Miriam Gilbert, lecturer at the Shakespeare Birthplace Trust in Stratford-upon-Avon, UK and professor emerita at the University of Iowa. Professor Gilbert has written a book about productions of “The Merchant of Venice” since the end of World War II in addition to other studies of drama and Shakespeare. Recently she spoke with The Forward’s Benjamin Ivry about the challenges of incarnating Shakespeare’s Venetian money-lender.

The Forward: In “Wrestling with Shylock” you quote the English Jewish actor Henry Goodman, known in America mostly for having been fired from the role of Max Bialystock in Mel Brooks’ musical “The Producers,” to the effect that Shylock is “actually not a nice guy. He is a scheming, dangerous man. And if you try and make him a nice guy because he is Jewish, and I am Jewish, then you throw away the play.” Yet many Jewish actors and directors have tried to present a benevolent Shylock. Are they misguided, or was Goodman?

Miriam Gilbert: I don’t think he was misguided, I think he was overstating the matter. I saw that performance live and any number of times on the DVD, and [Goodman] has so much warmth, so much love, that you can’t get away from it. In that quotation he was trying to be even-handed and not sentimentalize Shylock.

You disagree with the UK director John Barton, who wrote that Shylock was a “bad Jew and a bad human being.”

I think he madly overstated and it was true for him in the production he did in 1978 with Patrick Stewart. And Patrick Stewart at that point bought into that. When he did the play with David Suchet three years later, [Barton] could no longer hold that view, because Suchet was fighting him, so it was initially simplistic.

Was David Suchet’s ferocious portrayal of Shylock in 1981 inspired by his Lithuanian Jewish origins? Suchet followed a non-religious upbringing by being baptised into the Church of England in 1986, making rather a point of his new-found faith in documentaries about the Apostles Peter and Paul. Was Suchet’s fury as Shylock partly a rejection of his Jewish past?

Just to be fair, [Suchet] didn’t know that he would convert to Christianity. Right, he wasn’t a terribly observant Jew, but he did see himself as a Jew when he played Shylock. His conversion came later and it really was a kind of Road to Damascus thing. He has certainly insisted on it since. He had respect for the character [of Shylock] and was going to be a survivor. David Suchet at the end [of the play] was very quiet, taking off his yarmulke and leaving, refusing to grovel, retaining a sense of dignity.

The British actor Anthony Sher claimed that being South African was more pertinent than being Jewish for his performance as Shylock in 1978. Sher wrote that the “underdog isn’t necessarily a better person. My grandparents fled Jewish persecution in Lithuania at the turn of the century and became part of a system supporting apartheid.” Was Sher’s portrayal a form of inter-generational revenge?

Exactly, I don’t know. I think what you’re identifying in all these actors is their own conflict about playing a character where they see what’s ugly and mean about him, but they also see that how he’s treated explains that. Tony Sher seems to have such distance from his Jewish identity that he pushes that way down on the list, and so he rejects Jewishness to a certain extent.

In a memoir, Judi Dench, who played Portia in a 1970 London production of “The Merchant of Venice,” wrote: “I loathe the play. I think it is terrible, everyone behaves frightfully badly. Who cares about anybody in it?” Would you agree?

No, no. I quoted her in the book I did on the “Merchant of Venice.” That reaction of what an ugly play this is, is not entirely off the map. This play has the ability to get people very, very upset. She may be reflecting her discomfort with her own role in the play, as much as with Shylock.

Jewish actors and directors seem to fail as often as non-Jewish ones in portraying Shylock. Dustin Hoffman performed the role in 1989 in London to lukewarm reviews, although he never received notices as bad as when John Gielgud tried the part in 1937 and was sarcastically congratulated on his “remarkable portrait of a Jewish lesbian.”

I saw [the Hoffman] production and it wasn’t terribly interesting. Part of it was that he took a somewhat limited approach. When Shylock says “sufferance is the badge of all our tribe,” with the notion of sufferance he made himself more passive than he might have. If he felt he must stand there and take [abuse] because he was a Jew, that doesn’t leave [the actor] very far to go.

The American Jewish actor Morris Carnovsky (1897–1992) wrote that the ideas of “Merchant of Venice” center on the “acquisition of money and the corruption that stems therefrom… To the degree that money has shaped [its characters’] point of view, to that degree they are dehumanized.” Could this Marxist reading have added to Carnovsky’s fascination with the play?

It could be. You’ve got me on the performance I never saw but I wish I’d seen.

Carnovsky explained that after reading the play many times, his mind was haunted by an image of Chagall’s Rabbi of Vitebsk, and other artworks, including a sculpture of Moses by the Croatian artist Ivan Meštrović, “whose gesture I was actually able to ‘imitate’ in the Trial scene.” Are you aware of other actors being visually inspired by Jewish-themed art when portraying Shylock?

I think a lot would depend on the period in which the play was set. As so many productions are set in the 19th or 20th century, [actors] would be less likely to go into that because it wouldn’t fit in. The play has strikingly visual pictures, but Chagall does not come to mind. I have not run into any other Shylock who has made that point.

When the English Jewish director Jonathan Miller tried setting “The Merchant of Venice” in the decorous 1880s for a 1970 National Theatre production, wasn’t his premise exploded by the mannered Laurence Olivier in the lead role, foreshadowing his hammy portrayals of Jewish characters in films such as “The Jazz Singer” and “Boys from Brazil”?

I didn’t get to see it live, but the televised [Miller] version was to me the important production because it really asks what happens if we give Shylock power in society he never had before, as a kind of Rothschild figure. The notion that it is overdone or hammy is not my response to it, but I do find it a sentimental Shylock, because he is so much a victim, and has an offstage scream that is very hard to get out of your mind. All of this goes to a sentimental reading that is exactly what Henry Goodman was trying to get away from.

In 1913, the German Jewish critic Emil Faktor noted that a physically powerful, intimidating Shylock was incarnated by the non-Jewish actor Albert Bassermann, “as no genuinely Jewish actor, inhibited by better knowledge of the psyche of a suffering people, could ever play.” Have Jewish actors in the role all been cowering and physically intimidated by the play’s other characters?

No, no, not at all. That is what I think was the problem with Dustin Hoffman. I think he was like that. Suchet and Henry Goodman were not. Goodman was in a 1930s setting, so he was wary of the world he was in.

In 2015, the English Jewish actress Maureen Lipman suggested half-jokingly that she could play Shylock, and women have performed the role in recent adaptations in Malaysia and London, following a 19th century tradition. Have Jewish actresses ever played Shylock anywhere?