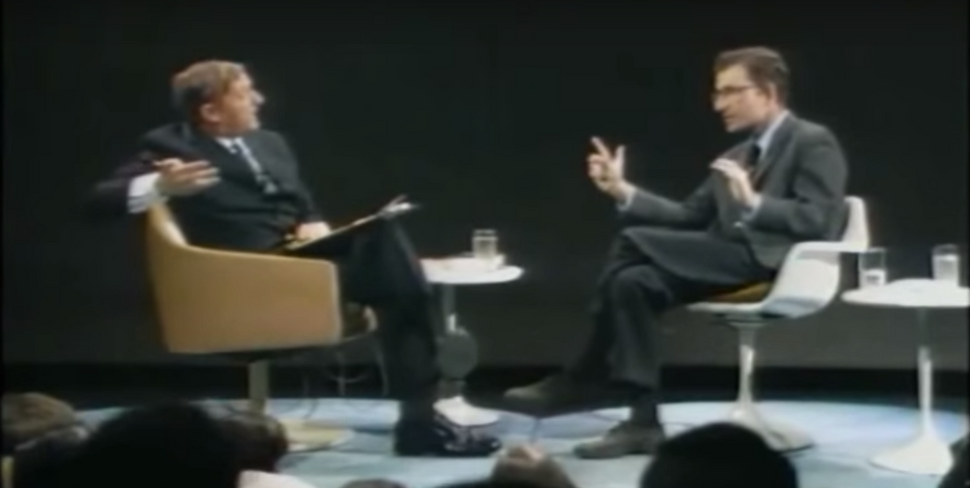 We are currently dealing with two pernicious and complementary problems in our country: politicians ranging from imbecilic to evil (often both) and a degraded, debased, public discourse. Both problems feed on one another, and it is difficult to say which came first (i.e. Trump speaks and thinks like an imbecile, thus every time we want to listen to the news, we hear a debased language. But, on the flip side, the general state of pop-media [and here we must count most cable news shows as well – Fox News’s “The Five” especially comes to mind] has been imbecilic as well – thus, did Trump help to produce our current situation or is he merely a product of it? The answer is almost certainly both).

There was a time, however, not so long ago, when there still existed some (relatively) mainstream news programming that elevated, rather than debased, the national political discourse. Say what you will about Dick Cavett (some find him a bit smarmy, a bit pretentious), but he used his talk show to interview the likes of James Baldwin and Ingmar Bergman – and not just when they were hawking books or films (compare this to the vapid, almost dystopian inanity of Jimmy Fallon).

There was another show, with an even more pompous, more hatable host (Cavett may have sometimes been a bit annoying, but he never rose even close to the level of abhorrent) that helped to elevate the national-political discourse – William F. Buckley’s “Firing Line.” Buckley (who we might say was admirable in his intelligence and curiosity, but frequently detestable in his conclusions) was the pre-eminent conservative thinker of his time – as the founder of the National Review and a prolific author he did more than just about anyone to shape the conservative ideology. He was also a frequent television presence – often appearing as a political commentator, perhaps most famously for his debates with Gore Vidal on ABC during the 1968 Republican and Democratic National Conventions (recently the subject of the excellent documentary “Best of Enemies”).

On “Firing Line”, a PBS program (how ironic that the godfather of conservative intellectualism had a program on a network that modern Republicans are now seeking to eradicate), Buckley brought on guests of all political and literary persuasions for interviews and debates (though, as Josh Jones over at OpenCulture points out, “Buckley rarely interviewed women unless they already agreed with him”).

Recently, the Hoover Institution at Stanford University has made 360 episodes of “Firing Line” available on YouTube (there are 1,505 episodes total – the Hoover Institution preserves 30 a year, and will make new episodes available on their YouTube channel and their digital collections site as they are preserved). Watching the show, it is evident that, even though Buckley often vehemently disagreed with his guests, he always made a genuine effort to hear them out and to independently investigate their works or opinions prior to the program. Notable guests included Allen Ginsberg (there could not be two more different looking and sounding people than the wildly bearded, disheveled Ginsberg and the genteel Buckley – also note the way Buckley butchers the pronunciation of “Kaddish”), Norman Mailer, Saul Alinsky, Jorge Louis Borges, Woody Allen and Muhammad Ali.

If you are able to make it past Buckley’s insufferably affected manner of speaking, the show is full of interesting nuggets and important debate. It’s difficult to imagine a televised meeting of ideologies like Alinsky’s and Buckley’s going smoothly today (willful ignorance and the cheap “gotcha” interviews of Tucker Carlson are more what sells these days). Frankly, it’s difficult to imagine any network televising conversation of the caliber of “Firing Line.”

Fortunately, we have the internet as a repository for this kind of programming, and there are still people carrying on this kind of work (NPR’s “Intelligence Squared” for instance), albeit, not on cable television. Whether this means that there is less demand for intellectual programming or that those who would consume and produce these programs are simply gravitating towards alternative modes of communication (or, again, whether this means both), is open for debate. In any event, we owe the Hoover Institution a thank you for preserving these debates and for reminding us that conversation between political rivals, was, at one time, not only polite, but edifying too.