How To Deconstruct The Graffiti In Tel Aviv’s Hippest Neighborhood 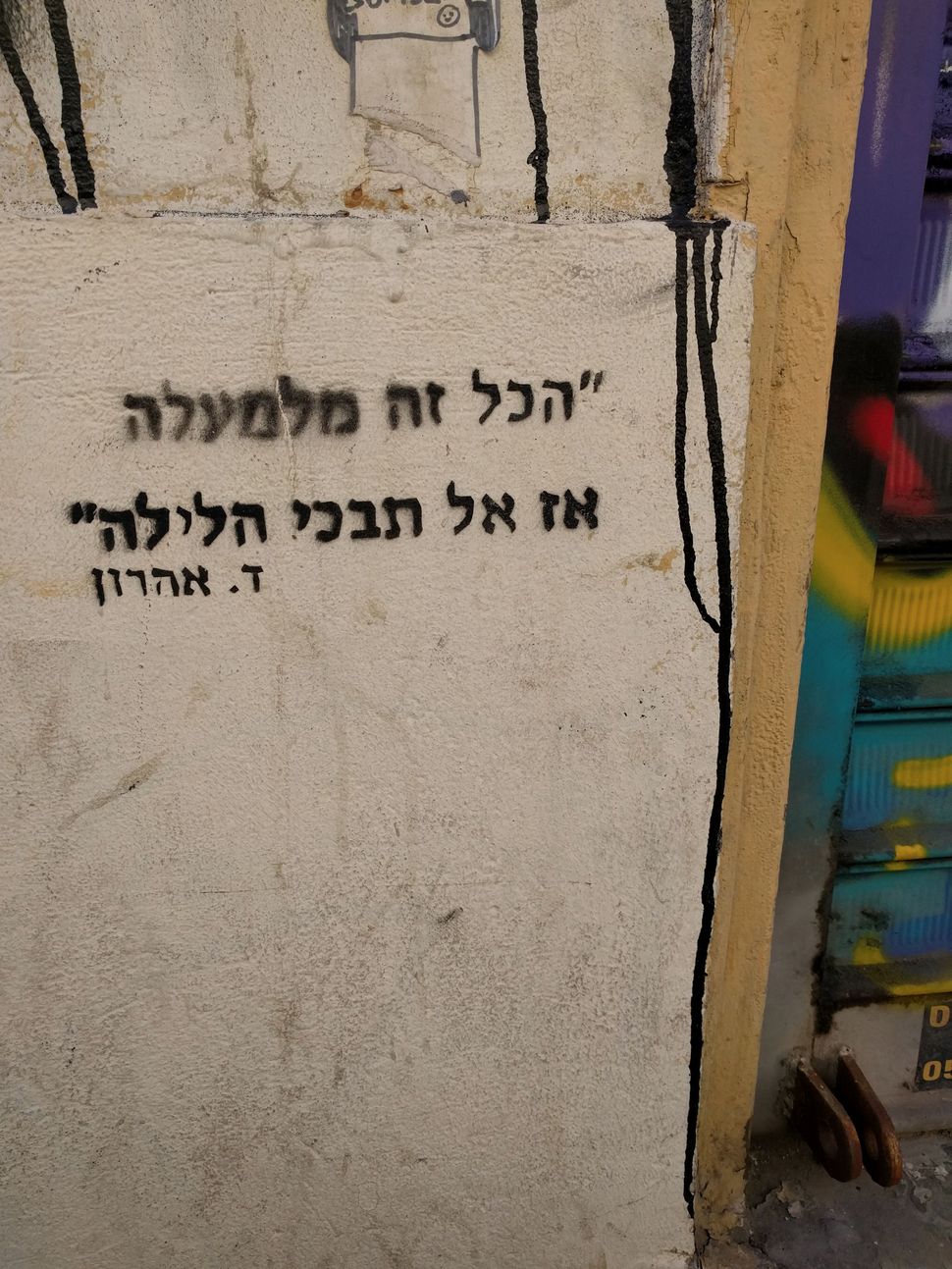 Most of the graffiti is in Hebrew, and a lot of it is spray-painted poetry signed by the poet. Occasionally there are English and French missives painted onto crumbling buildings that will probably soon be transformed into pricey condos, sending young artists farther afield. But in the meantime, there is still plenty of graffiti to decipher.

To see some of it yourself, start from tony Rothschild Boulevard and then walk down Nachalat Binyamin Street. When you reach Levinsky Street and its busy market, where the display of nuts, dried fruits and spices is its own art show, purchase some dates to make the viewing tour a little sweeter. Here is a recent sampling of what can be found on Florentin’s walls, along with a diary of my efforts to translate it. 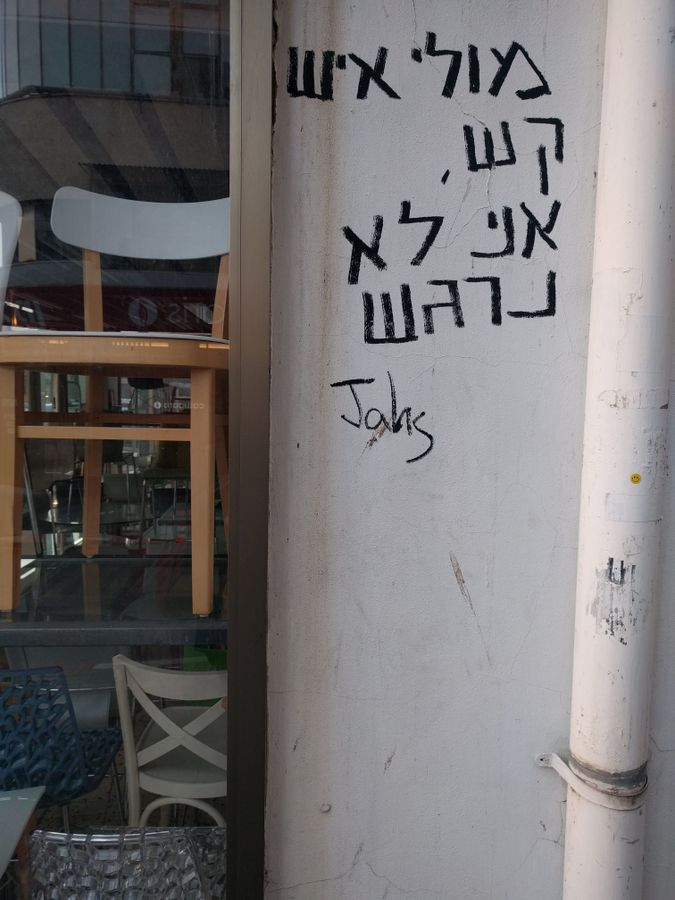 PHOTO 1: First up is a four-line, untitled Hebrew poem signed “Jahs” in English. Here is my translation:

Opposite me a man
of straw.
I am not
excited.

At least that was my first frustrating take on translating it.

Here it seems relevant to share some translator headaches. In Hebrew, lines one, two and four end with the letter shin, which has a “sh” sound. It’s pretty impossible to replicate this in English, since my choices to translate the word ish — “man” — and the words “straw” and “excited” just don’t have the same ending sound in English. This means that the charm of the Hebrew, which threads the same “sh” sound through four lines, creating a whoosh, is basically gone.

So I tried this looser version, going with “across” instead of “opposite” in order to create some similar sound between “across and “straw.” (At least “straw” is pronounced with a New York accent) I also tried to flip the word order so that “me” and “really” would have similar sounds, and the result felt better.

Across from me
a straw-man.
I am not really
excited.

Yup, I can see how that would be a reaction to today’s fake-news epidemic and unbelievable-leader crisis — a certain numbness. The day I walked through Florentin was the same day headlines alleged that Prime Minister Benjamin Netanyahu accepted bribes of pricey cigars and pens; the conversations I overheard all seemed to compare Donald Trump and Netanyahu. Kleptocracy is an international concern right now, I learned as I eavesdropped. 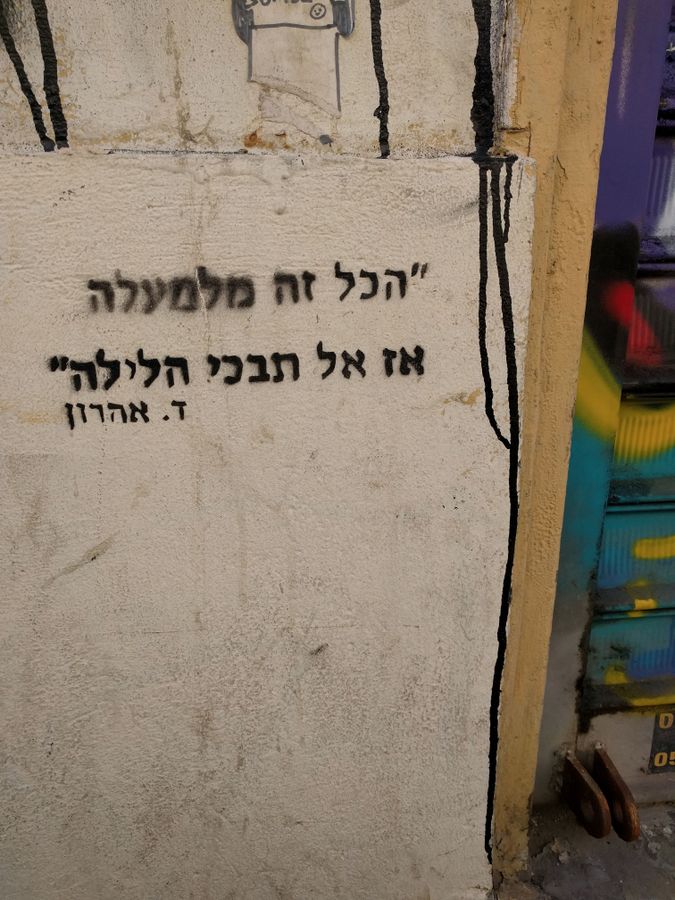 PHOTO 2: The second sample I encountered is a two-line poem signed in Hebrew by D. Aharon. The poem is in quotation marks, as if it is an aphorism.

“Everything is from above
so don’t cry tonight”

Well, that’s my first effort. More translator headaches here. In Hebrew, the last words of the line — mil’ma’lah (“from above,” or, figuratively, “from the heavens”) in the top line and ha’layla (“the night” or “tonight”) in the second — rhyme. And in general, rhyme is much easier to come by in Hebrew. It’s nice to think of “above” and “tonight” as rhyming, but they just don’t do that in English. But what if I changed “tonight” to something close to it, like “this evening”? Then I would at least have the “v” sound repeat.

“Everything is from above
so don’t weep this evening”

I’m momentarily a bit more satisfied, until I realize I can change “above” to “on high” in order to re-create rhyme.

“Everything is from on high
so don’t cry tonight.”

It’s close. And it expresses the general Israeli sentiment of yihiyeh be’seder, or, “It will be all right,” a feeling hard to channel right now. 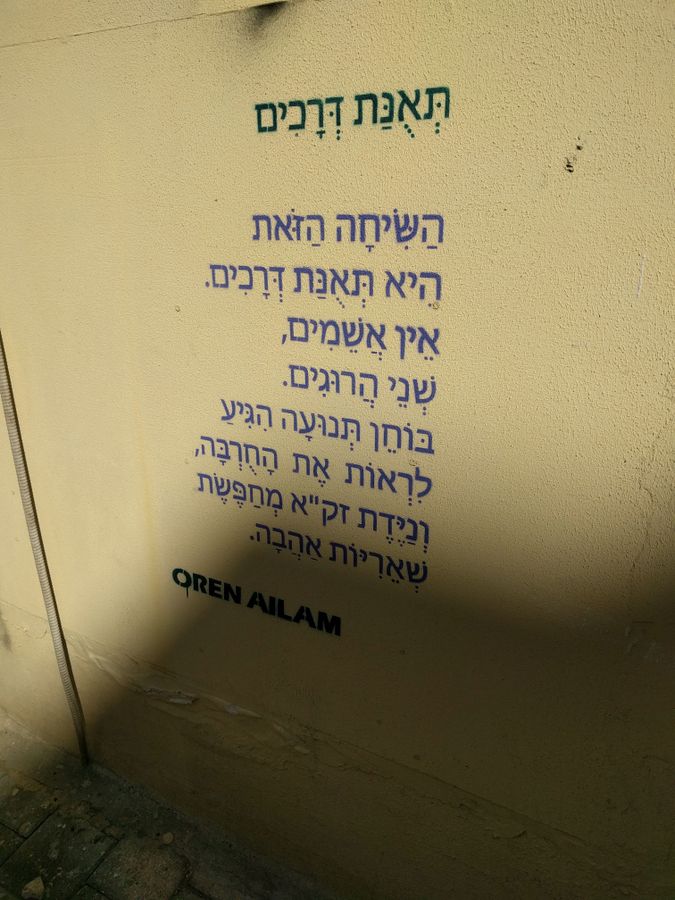 PHOTO 3: I move on, explore some alleys, fend off some unwanted comments, and make my way down some streets that are more falling apart than gentrifying. That’s when I find a moving poem signed “Oren Ailam” in English, though the poem itself is in Hebrew. Here’s my translation:

Car Accident
This conversation
is a car accident.
There are no guilty ones,
just two dead.
A traffic inspector arrived
to see the ruin,
and a Disaster Victim Identification vehicle looks
for the leftovers of love.

This one was surprisingly easy to translate, even though it probably needs the “just” that I added before “two dead” for clarity’s sake. In Hebrew a car accident is te’unat drachim, literally an accident of paths or roads, and in English we don’t say a “road accident” but rather a car accident. So I had to insert a car.

In Hebrew the word churbah, which I translated here as “ruin,” has a long history. The destruction of the First and Second Temple, for instance, is called the churban. There’s no way the English reader will get that resonance and make that connection, though maybe using “destruction” instead of “ruin” would get some hyper-historically aware readers to think “Aha! Destruction of the Temple.” Last but not least, the Hebrew has an abbreviation — zaka — but that would mean nothing in English, so I went with “Disaster Victim Identification,” which is the official English translation of the term zihui korbanot ason.The term is abbreviated into zaka. (Note: An informal poll of four Israelis sitting next to me in coffee shops revealed that none knew what zaka actually stands for.)

One more thing: The Hebrew word she’eriot, or “leftovers” in everyday Hebrew, is related to the word shearit, or “remnant,” which has been used to describe the survivors of the Jewish people. Hard to get that in English. 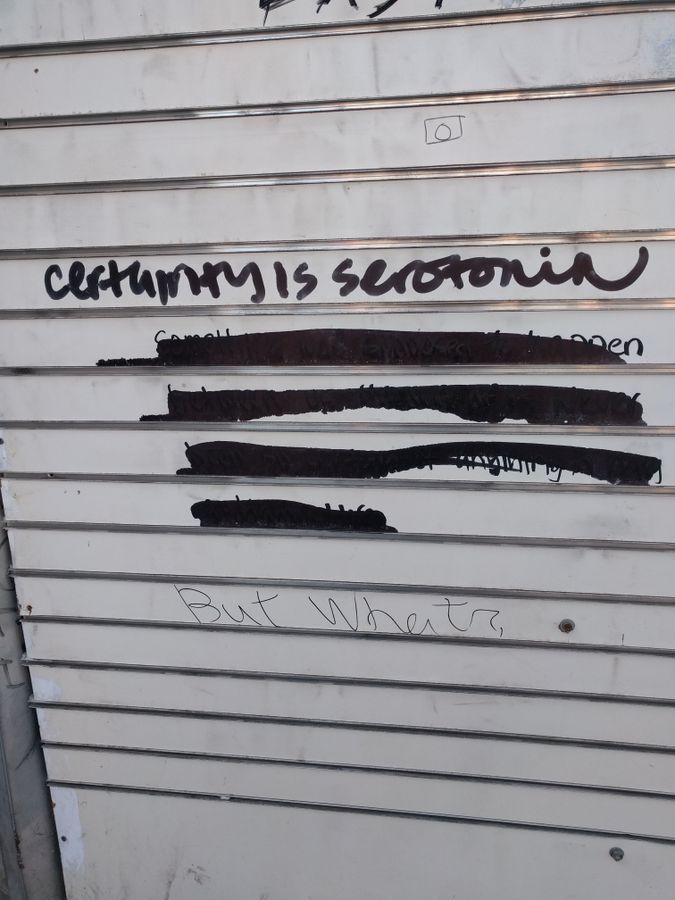 PHOTO 4: I moved on to some English-language graffiti and a break from translation stress. This was painted on a garage: “Certainty is serotonin.”

Just beneath it someone scratched a dissent. “But what?”

That’s the beauty of Florentin graffiti — both the words and the visual art. The spray-painters and wall-scratchers talk to each other in various languages, and passersby get to listen in. It’s an interesting alternative to the nightly news, where, in Israel at least, all the guests talk at once, and dialogue is hard to come by. Lack of dialogue is, perhaps, an international issue — which may be why the spray-painters are taking their frustration to the streets.

How To Deconstruct The Graffiti In Tel Aviv’s Hippest Neighborhood