Is This 23-Year-Old Brooklyn Native Opera’s Next Great Star? Countertenor Aryeh Nussbaum Cohen, at 23 years old, might be one of opera’s most promising stars.

He’s lined up engagements for the next few years, appearing next with Virginia’s Wolf Trap Opera and the Houston Grand Opera Studio. His subsequent commitments are currently under wraps.

He was just named one of the winners of the 2017 Metropolitan Opera National Council Auditions, widely considered the most prestigious vocal competition in the world.

And The New York Times’s Zachary Woolfe, reviewing the Grand Finals Concert that capped off the competition, wrote that of the evening’s six winners, “there was only one complete artist.”

Reached by phone the day after the competition, Nussbaum Cohen, the son of Forward contributing editor Debra Nussbaum Cohen, sounded like he was on the verge of laughing or crying – or, maybe, both. (He’d just read Woolfe’s article, which ended with the simple but impenetrable endorsement “Mr. Cohen is ready,” so who could blame him?)

Nussbaum Cohen, who grew up singing in HaZamir, the International Jewish High School Choir, and has spent the last seven High Holidays serving as an assistant cantor at the East Midwood Jewish Center, said he was celebrating the award by getting back to work. Still, he took a break to fill the Forward in on his career so far, and what, as far as he’s able to say, comes next. Read excerpts of that conversation, below.

Talya Zax: What’s your first memory of being exposed to opera? When did you first want to become an opera singer?

Aryeh Nussbaum Cohen: I grew up singing in choirs, and I was quote-on-quote musical, but opera was not at all part of my upbringing. I didn’t go to my first opera until my sophomore year at Princeton. I started as a public policy major, and I won a ticket from the music department at Princeton to an opera, It was “La Bohème” at the Metropolitan Opera in the famous [Franco] Zeffirelli production. I saw that opera and it just blew my mind. That day I decided that I just had to take this more seriously, and if I could make a life in this art form, that was absolutely how I wanted to spend my time on earth.

So how did you get yourself to this stage in your career so quickly? That seems like quite a rapid ascent.

I spent my first academic year after Princeton doing what I call woodshedding, I just spent a year practicing every day, working with my teachers and coaches, getting myself into a form where I felt I had something worth producing in public.

Training to be an opera singer is like training to be a power lifter, you just have to do the same exercises over and over. You have to train your voice to be capable of certain things. It’s a lot of solitary work that goes behind public performance. 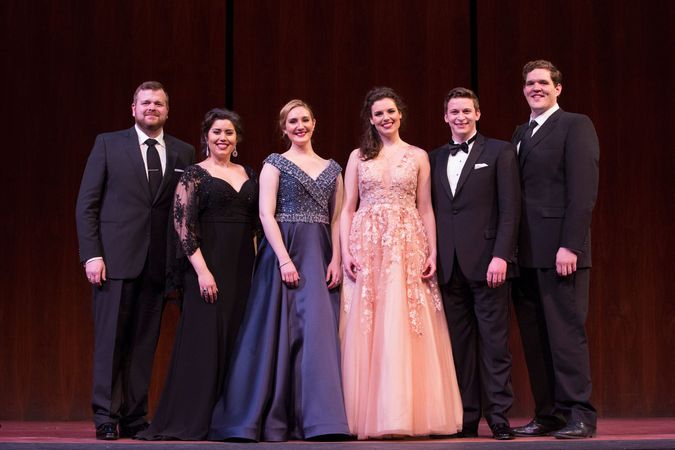 What was it like to go through this lengthy audition process for the Met?

For me, as I got through the first round I was like ok, I’m going to work my butt off for two months so I can nail the second round. It’s been great to have that as a driving force this year. It’s a really rewarding process, the folks at the Metropolitan Opera are really just wonderful. I think it is the most stressful vocal competition in the world, the top opera competition, but they manage to make it feel almost familial even while it’s very nerve-wracking.

Yesterday on that stage, it was the most incredible moment of my life. To be singing that music on that stage with the greatest orchestra in the world, it was beyond my wildest dreams. When I went out for my second aria I felt like I was in the zone from minute one.

You can’t help but just think about the greatest singers in the world, who have all stood on that stage, with that orchestra. It’s like the temple of opera, the holy of holies, it’s hallowed ground. During the semifinal round was the first time we sang on that stage, as I walked off the stage after the semifinals I burst into tears as I was walking back to the dressing rooms.

Can you explain what a countertenor is? When did you realize you were one?

A countertenor is a man who sings in a woman’s vocal range. We use what is called falsetto, which is the Italian term that technically means false little voice; obviously, that’s a bit of a misnomer in the case of an operatic counter tenor. We essentially only use the tip of the vocal cord to vibrate and produce our sound. We sing music that was written mostly for the castratti, who were castrated men in the 17th and 18th centuries, but now non-castrated men who can sing in that range have emerged, starting in the mid-20th century.

David Daniels, countertenor who opened up all the doors, the first one who houses like the Metropolitan Opera were putting on starring productions for him, he didn’t know he was a countertenor until he was older than I am now.

What are your dream roles?

Ultimately, I would love to sing the Handel heroes. I call them the great heroic countertenor range roles. I would also love to make a name for myself in new music. One of the arias I sang yesterday, this aria from the opera “Flight,” about a refugee fleeing persecution in Iran, I connect to in a way I have connected to nothing else.

Honestly, this role, that role, if I can spend my life making this art with wonderful colleagues in world-class houses, I’d be the happiest man in the world.

Is This 23-Year-Old Brooklyn Native Opera’s Next Great Star?