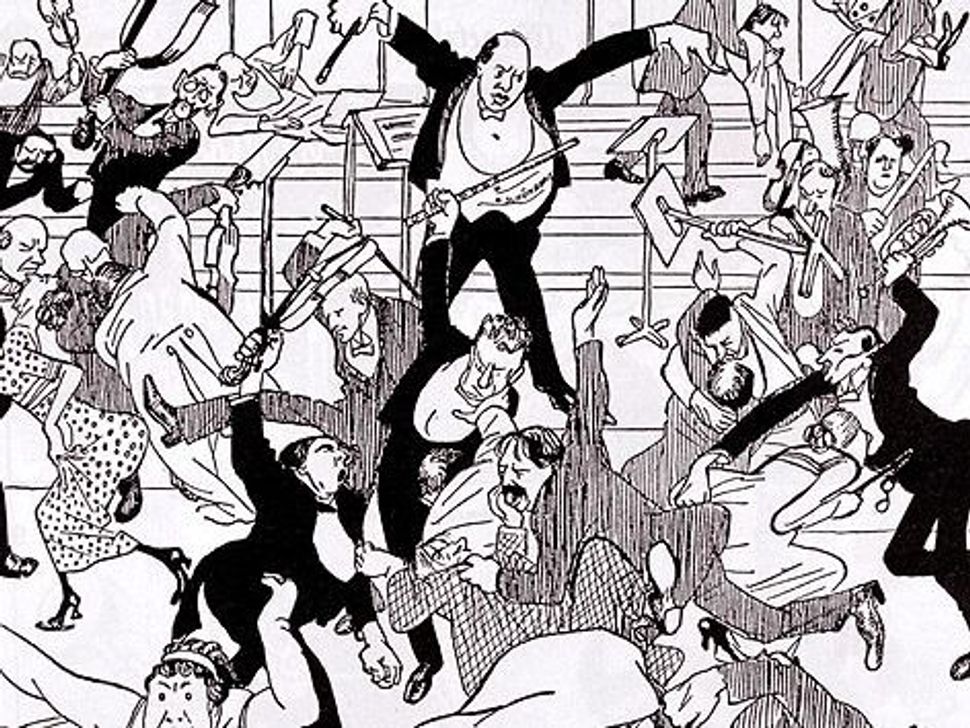 When faced with immense personal grief, we are given to sobbing, to wailing, to screaming – the old categories of expression seem startlingly, absurdly inadequate, and thus we revert to a pre-linguistic stage so that we might give voice to those things that render language so helplessly impotent. But one could just as easily see this reversion as an advance – as using new means (or revamping the old ones) to solve a problem. It was precisely such an advance, in precisely such an emotional state, that Arnold Schoenberg made with his second string quartet.

The quartet, written in 1908, was in part a response to the revelation that Schoenberg’s wife, Mathilde, had been having an affair. To make matters worse, the other participant in the affair was Schoenberg’s friend, the artist Richard Grestl, to whom Schoenberg had initially introduced Mathilde. After being confronted by her husband, Mathilde left the composer and their two children for Grestl. However, Anton Webern, a student of Schoenberg’s and a major composer in his own right, was eventually able to convince Mathilde to return home – after which Grestl, at age 25, stabbed himself in the chest, set fire to his paintings, and hung himself.

The second string quartet represented Schoenberg’s first real break with tonality (the first performance of the piece was, just like the first performance of Stravinsky’s “The Rite of Spring,” met with jeers from an unruly audience). Gone were the stable relations of pitches, the comforting cadences. In their place were melodies and harmonies built on something more elemental, more combustible. People often think of the leap into atonality as something inhuman, something alienating, but one could also view it as something more tied up in the human experience – music finally liberated from the conventions of tonal harmony and melody, of fixed relations, free to explore the full range of musical possibility. If music is indeed the purest expression of the will, as Arthur Schopenhauer posited, then atonal music, along with its distant relation, free jazz, in its freedom and chance, is perhaps the highest manifestation of the will within this hierarchy, better equipped than tonal music to capture the randomness and insatiability of human existence. (None of this is to say of course that tonal music is “dead” or cannot still be immensely moving, just that it uses different means to express emotions that are perhaps more concrete – melancholy, joy, etc… – whereas atonal music seems to be more like a bubbling mass, less distinct, but sometimes, more urgent, more intense).

Certainly in Schoenberg’s case, tonality, and the comfort it provided, was ill suited to capture his emotional state – his relations had been irreparably damaged, and his music responded in turn. Stefan George’s poem “Litany,” which Schoenberg used as the text for the third movement of the quartet (the inclusion of a soprano into the piece was itself a radical move), puts it best: “Fires in my heart still glow, open, / inside my heart a cry awakes. / Kill the longing, close the wound! / Take my love away, give me your joy!

On Wednesday night, the absurdly named International Street Cannibals chamber ensemble performed a program, called “Air Schoenberg: Connecting Flights,” at St. Marks Church in the Bowery that centered around Schoenberg’s quartet. As they write in the program notes, the music of the evening focused on “compositions that were key to Schoenberg’s growth, and later ones effected [sic] by this revolutionary work” including works by “Schoenberg’s mentors and influential figures of the canon Zemlinsky, Brahms, and Schubert), students (Berg, Webern and Korngold) and students of students (Schnittke and Arvo Pärt).”

The program, despite a clear logic, was not performed chronologically. Rather, the music continually jumped from tonality to atonality and back again, casting the differences between the two types of music into sharp relief – showcasing the best of both worlds. After pianist Conor Hanick’s stirring rendition of Schoenberg’s “Sechs Kleine Stucke,” six miniature atonal pieces, each revealing the densest, most sumptuous chords that a piano could hope to muster, Soprano Ariadne Greif’s rendition of the more traditional “Glückwunsch” by Erich Wolfgang Korngold, came as a bit of fresh air – its serenity easier to take in than the sparse tension of Schoenberg’s “Sechs Kleine Stucke.”

Some pieces straddled the lines between tonality and atonality. Alfred Schnittke’s arangement of “Silent Night” (performed by Hanick and violinist Anna Tsukervanik) for instance, begins with the famous melody played straight by the violin, only to deform into ever increasing darkness and discord – the sound of Christmas strangled and bludgeoned by its own cheer.

Aside from the interesting piece selection and the deft playing of all the musicians involved, the best part of the night was the fantastic physicality of the performances. The opening piece, Arvo Pärt’s “Fratres” required an intense virtuosic performance from Tsukervanik, and she delivered the music, but also a certain theatricality, a range of motion which gave Pärt’s elysian piece bodily importance, bodily weight. Similarly, Greif, in her performance of Schubert’s “Erlkönig”, as close as this program came to what we might call “classical-pop,” was eminently demonstrative. Even without understanding German, Greif’s voice and motions suggested the narrative, and made Goethe’s dark story of the Elf King come to life.

In their performance of Schoenberg’s string quartet, the melody bounced around between the instruments, giving the piece a real sense of dimension that is often absent when listening to recorded versions. The third movement has a moment that, on record is wonderful in its own right, but seen live, by a group as uninhibited as International Street Cannibals, becomes truly transcendent (the experience of classical music, like all other music, benefits immensely from being seen live – support your local ensembles). The melody sung by Greif, which to this point has been knotty and disjointed (in an exciting way), slowly builds to a point of climax in which she sustains one note towards the upper register of her voice, then, another, higher note, then down the staff, then back up again, higher, longer – each note reflected in the movements of the singer. All the while the strings, framing the soprano, swirl and swell, the players assuming grimacing looks of concentration as their bows quickly and violently streak across the strings. The listener is cast into a tempest of sound and gesture – it is indicative of both Schoenberg’s genius and the ensemble’s mastery that they were able to so adeptly plumb the burning depths of this tortured piece.

There’s an essay by the composer Pierre Boulez from 1968 in which, after what amounts to a long and very technical take down of Schoenberg (as well as Anton Webern, here only referred to pejoratively as “a certain Webern”) and a directive to move beyond his influence, he writes, “Therefore I do not hesitate to write, not out of any desire to provoke a stupid scandal, but equally without bashful hypocrisy and pointless melancholy: SCHOENBERG IS DEAD.” I beg to differ. At St. Marks Church in the Bowery on Wednesday night, in the hands of the International Street Cannibals, Schoenberg was very much alive.