Meet The Holocaust Survivor Who Lives With 7,000 Pieces Of Anti-Semitic Propaganda 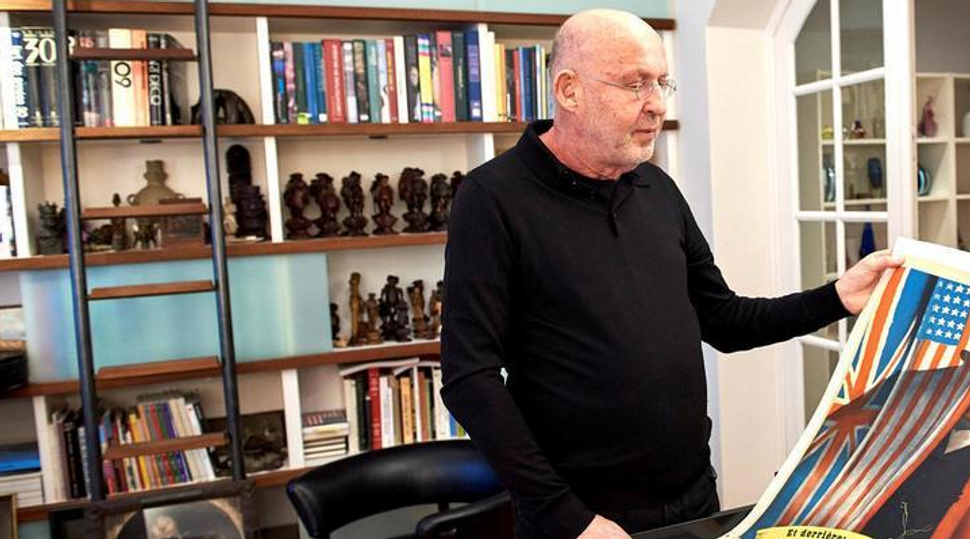 Arthur Langerman was born in Antwerp in 1942. His childhood, like that of every European Jew born in that period, was defined by the bloody reverberations of that continent’s anti-Semitism. Two years after his birth, his parents were deported to Auschwitz, and he was placed in an orphanage. His father died in the camp, but his mother survived.

European Jews of Langerman’s generation coped with the legacy of the Holocaust in a number of ways. Some denied their Jewish heritage. Some invested their hopes in the fledgling state of Israel. Some addressed the evil that had befallen their people directly, through writing, art, or politics.

Langerman, who founded and helps run an Antwerp diamond dealership, looked back to the roots of that evil. 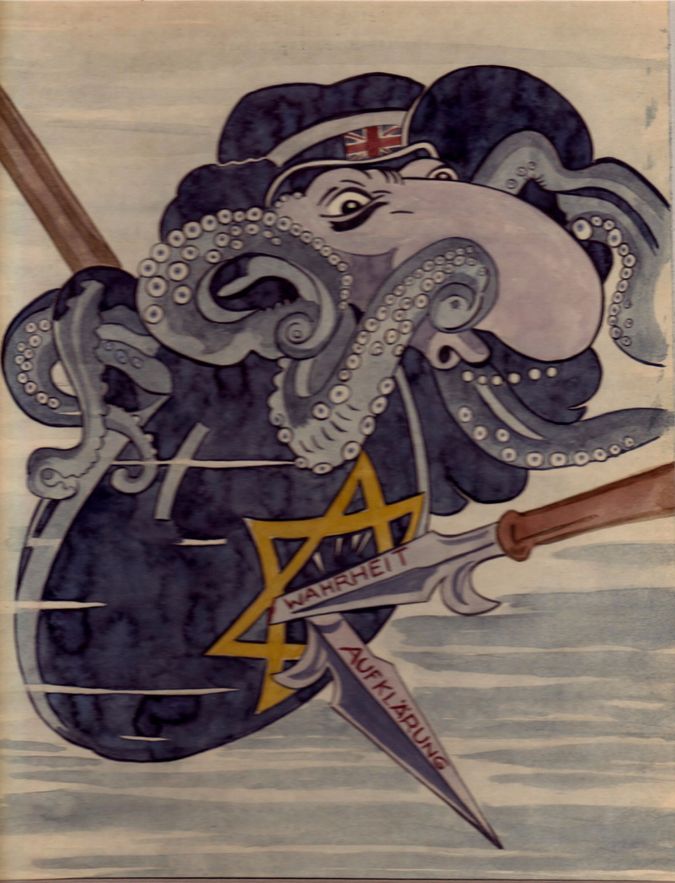 Image by Courtesy of Arthur Langerman

His collection’s earliest pieces are from 1886, the year that the French writer, politician, and eventual supporter of accusations against Alfred Dreyfus, Édouard Drumont, published “La France juive,” or “Jewish France,” a lengthy anti-Semitic book that made racial, religious and financial arguments against Jews.

It closes in 1945, the year in which the Holocaust ended.

Over the decades, Langerman, who keeps his collection in his Antwerp home, has mostly declined to exhibit the items he’s assembled. In recent years, that’s changed, and over 120 objects from his collection are currently being exhibited in Caen, France at the Caen-Normandy Memorial Museum.

The Forward spoke with Langerman over the phone. The following conversation has been edited.

Arthur Langerman: My mother came back from the war, but as [with] many of the survivors from the Holocaust, she didn’t want to share what she had experienced over there. And I didn’t ask her, because I knew she suffered a lot, and I didn’t want to pain her.

In 1961, when the Eichmann trial started, I was very interested to hear what happened to the Jews in Europe, and what was the fate of my family. My father, my grandparents, aunts, uncles, cousins, almost none survived.

I asked myself, for a small group of people like Jews, what made other people bring so much hate on their heads. And I started to look around, I went to a lot of flea markets, and every time, I saw images of hate. I was surprised to see how hateful it was. 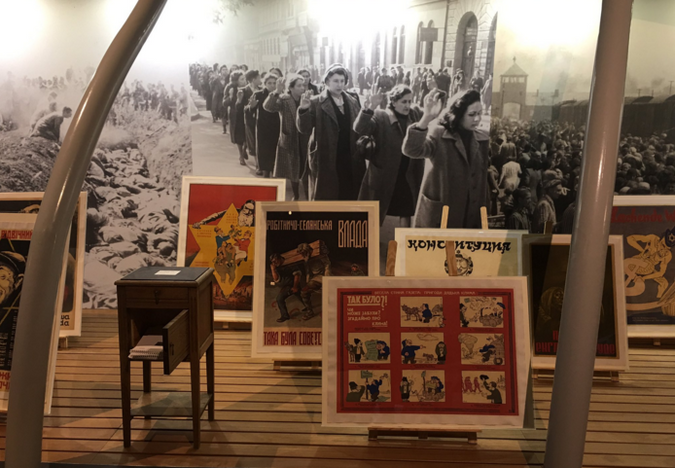 Do you remember what the first item in your collection was?

The first item was a postcard. It was funny, it was hateful. It was a spider with the head of a Jewish man, and behind it was written in small text “don’t forget to water my plants,” something like that. Sending a hateful postcard was already in the habits of the people. It was not something sensational. Being anti-Semitic, in this period, was really the normality.

What qualities, aesthetic or ideological, tie the pieces in your collection together?

Big artists like Fips – Philipp Rupprecht, who was the caricaturist of Der Stürmer – they were only telling horrors about the Jews. He used to make drawings, in every single newspaper: They all were, in the same way, provoking people to hate Jews. In an Austrian magazine there was a painter who also made some very horrible pieces about Jews. The quality that I see is that you have really talented artists that gave their soul to the devil. They were drawing for hate.

Philip Rupprecht was convicted after the war and served 10 years. He became anonymous. Today I would like to know his descendants, and to see who he was, actually. What was the purpose of his hate? Was it because of money? Was it because of fear?

As you’ve assembled this collection, have you learned much about the artists who created this propaganda? Have you learned anything that’s surprised you?

I didn’t study so much who was behind it. Hundreds of people made these drawings, and it’s quite difficult to know today who they were and why they did it. It started in 1886 with Drumont, who made a book called “La France juive.” In this book he describes the Jews as a race, with different theories showing that we are all one race, and an inferior race. This was the really beginning of the hatred.

After this was the Dreyfus trial. Germany took over all the theories that Drumont brought in in 1886 and adapted it to the German way of thinking. 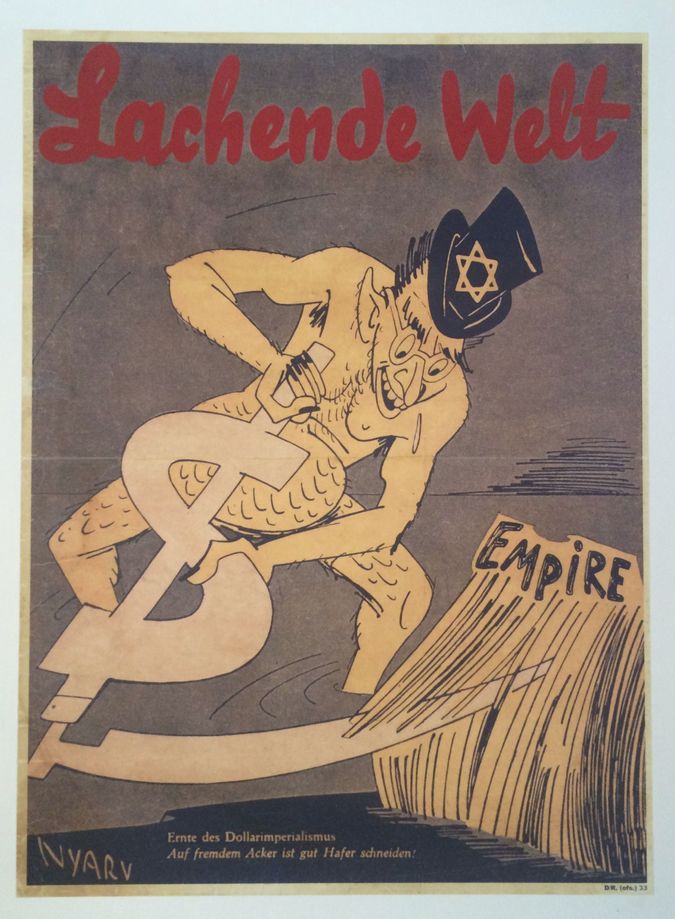 Image by Courtesy of Arthur Langerman

Which countries are represented in your collection?

I have all the European countries, and I have also America.

The Americans and the English, when they are drawing they are spouting [about] Jews, they’re spouting about their attitude, their way of doing business, cheating, lying, being mean, not being patriotic and so on.

The French, German, and east European [propaganda] is very very anti anti-Semitic during this period, showing the Jew as a rat, as a spider, as an insect that you have to destroy.

The difference between Anglo-Saxon and European [propaganda] is the finality that brought the Germans to destroy 6 million Jews. Their minds were prepared for this by these drawings. Showing the Jews like animals. Stangl, who was the commandant of Treblinka, didn’t call the Jews people, he called them pieces. After a day of work he would say I destroyed 12,000 pieces. This was the way he was thinking about the Jews.

Are there items in your collection you currently find yourself dwelling on the most? What makes those items stand out for you?

Yes. The more horrible they are, the more I think about them. I wonder all the time how is it possible that Germany, the country of Bach, of Handel, of Mozart could become such animals during the war?

Why did you decide to begin exhibiting your collection?

After 50 years of collecting, I came to the conclusion that I have to show it to the young people. I have to educate. I have some people, journalists, I ask them “How many Jews do you think there are in the world?” The figure goes from 100 million to 500 million. There is this feeling of the Jew, this education in the mind, that made them believe that Jews are so numerous that you can be afraid.

How do you introduce people to your collection? What does their reaction tend to be?

I try to show a few images to friends of mine, also Jewish, and to non-Jews, and they all had the same reaction: They say “Oh no, I don’t want to see it, it disgusts me, I’m disgusted by what I see, it makes me sad and this and that.”

I invited them to come to visit the exhibition [in Caen] and they were very enthusiastic. They say, “It’s fantastic, the work that you are doing for the Jewish people.” I’m trying to tell to the world what is a Jew, what happened to them, and what is their fate.

In a recent interview for The Guardian, you said that you do consider the items in your collection to have some artistic value. Can you say more about that?

They should not be considered as artistic, but I find that some drawings are very, very good. The meaning is bad, the idea behind them is bad, but the pieces are well drawn.

What does it feel like to live with a collection of such hateful materials in your home?

I live very well with it because I was born in it. All my life, there hasn’t been one day that I haven’t thought of the war and what happened. It’s not one group of six million, it’s six million individuals that had their lives, their thoughts, their loves, their work, good ones, bad ones, stupid ones, intelligent ones, everyone was a living person. When you speak about six million Jews, you speak like a group, like a block.

I’m thinking a lot about the war. I’m full of it. And I can live with it. Actually, it helps me to live, because I’m so angry about what happened, that the world left the Jews alone to die in the horrible way. It’s revolting, when I think of it.

Meet The Holocaust Survivor Who Lives With 7,000 Pieces Of Anti-Semitic Propaganda