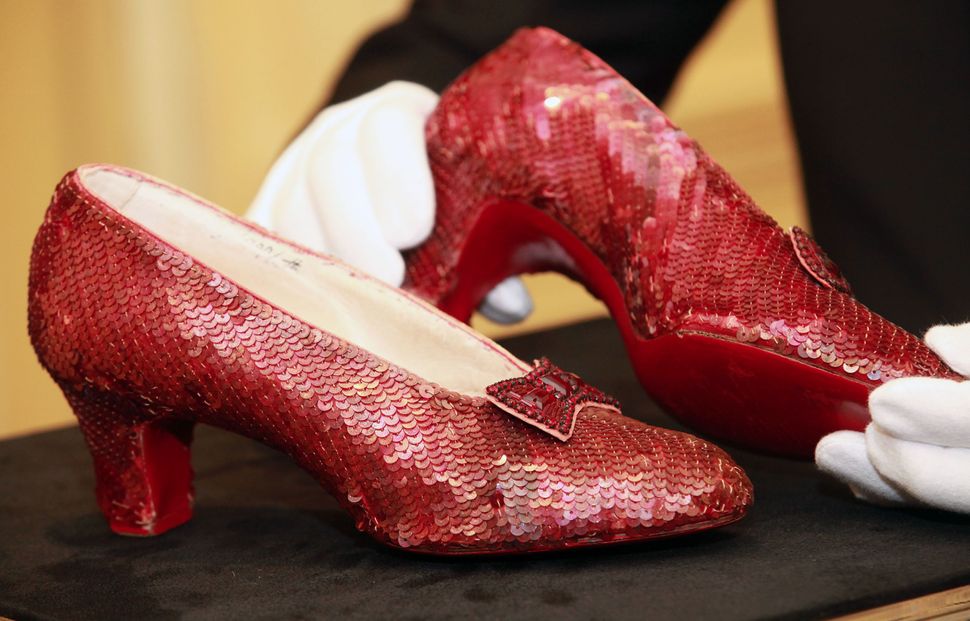 The Smithsonian-displayed pair of Dorothy’s ruby slippers from “The Wizard of Oz” — the most magical, powerful, and fashion-forward footwear in film history — is about to retreat behind the wizard’s curtain (sorry) through 2018. There, they will undergo a comprehensive, largely crowd-funded restoration, after which they’ll return to the National Museum of American History.

While Judy Garland’s petite feet made the shoes famous, their designer was associated in his own right with glamour of a height that bestows the privilege of going by a single moniker, in his case: Adrian.

Adrian, who when he deigned to go by two names went by Gilbert Adrian, was born in Connecticut with an astonishing three names: Adrian Adolph Greenberg. His grandparents on his father’s side were Russian immigrants, while his mother’s parents had come to the United States from Bohemia and Germany.

It’s unclear when Adrian began his nominal reorganization. Was it when he was a student at the New York School for Fine and Applied Arts, since renamed as the Parsons School of Design? Or when he transferred to the school’s Paris campus, where Irving Berlin — another name-changing show-biz man — hired him to design costumes for “The Music Box Review”?

Or, perhaps, once he became head costume designer for Metro-Goldwyn-Mayer? That last stop would be Adrian’s most famous, and lead him to create a great testament to his mutability as a designer. Best known in his life for his opulent gowns, most memorably displayed in an originally-cut, now-restored fashion show in the 1939 film “The Women,” Adrian’s work of most lasting significance was those ruby slippers.

And what a work they were! The design that made it on to Garland’s feet, via, of course, one very dead witch, followed on several unsuccessful tries. First came a pair designed to mimic so-called “Arabian” style, featuring toes that curled upwards in gleeful, if spindly, crests, then a design decorated with ruby-esque red bugle beads that proved unmanageably heavy.

The final look was simultaneously demure and excessive, a midwest-appropriate Mary Jane positively overrun with sequins: Each shoe, supposedly, sported 2,300.

Now, the Smithsonian has announced that during their absence, their spot in the exhibited collection will be occupied by Indiana Jones’s iconic hat and whip.

Dorothy would surely approve of the choice — she did, after all, have a taste for adventure. And Adrian, that master sartorial movie magic, would almost certainly agree.